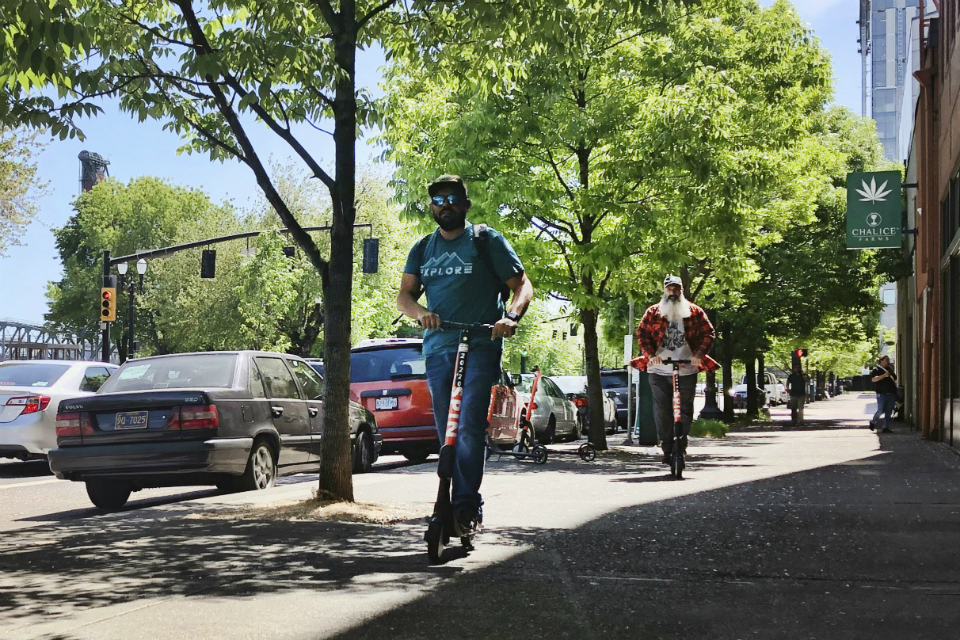 PORTLAND, Ore. (AP) — A disability rights nonprofit group in Oregon filed a letter of complaint Thursday with the city of Portland over new rules about an electric scooter pilot program.

In its letter, Disability Rights Oregon said Portland's decision to have residents file complaints about the ubiquitous e-scooters directly with the companies participating in the program instead of with the city reduces transparency and increases danger to the public.

Portland just began a second, yearlong phase of the pilot program intended to help the progressive city introduce the devices while avoiding pitfalls experienced by some other major U.S. metropolises.

It allows up to 2,500 of the devices on city streets from multiple companies as part of the "micro-mobility revolution" that's swept through major U.S. cities.

A four-month experiment with the e-scooters last year was successful but also generated 6,000 complaints and raised questions about pedestrian safety and the impact of the devices on public spaces like parks. The scooters also led to 176 visits to the emergency room or urgent care, the city said.

Electric scooters have surged in popularity in cities across the U.S. as a convenient, environmentally friendly mode of transportation for short trips that can otherwise be clogged with traffic. A report released last month by the National Association of City Transportation Officials said riders took 38.5 million trips on shared electric scooters in 2018, eclipsing the 36.5 million trips on shared, docked bicycles.

Last year, Portland residents could file complaints with the city about scooters. Now, the companies themselves are required to maintain complaint lines 24/7 and must report data to the city each month.

The information is reported with names and details stripped out, said Emily Cooper, the nonprofit's legal director, and companies have an incentive to downplay any serious issues.

The city shouldn't look at safety at arm's length.

"If someone was hurt or someone needs help, there's no way for the city to know that based on the way they structured this agreement," she said. "The city shouldn't look at safety at arm's length."

Dylan Rivera, a spokesman for the city's Department of Transportation, did not immediately return a request for comment.

Brianna Orr, a transportation specialist with the city, said in an email to Disability Rights Oregon that the city wasn't able to respond quickly enough to complaints in the first phase of the pilot program. Now, for example, participating companies must respond to abandoned scooters blocking sidewalks and curb ramps within 60 minutes, she said.

The city will audit response times of the companies and the monthly reports will be public record, Orr said in the email, which was shared with the AP by the nonprofit.

In famously progressive Portland, e-scooters are an important part of the city's drive to reduce traffic and encourage alternative modes of transportation, from light rail to bike commuting.

But like Portland, cities across the U.S. have struggled to accommodate the devices while regulating safety and access for people in lower income neighborhoods.

San Francisco, for instance, kicked out Bird, Lime and Spin and instituted a competition for permits, ultimately awarding them to relative underdogs Scoot and Skip and capping the number of scooters that could be deployed.

New York City does not allow shared electric scooters, although legislation has been introduce to change the rule.