Portland's Kanter Uncertain for 2nd Round With Hurt Shoulder 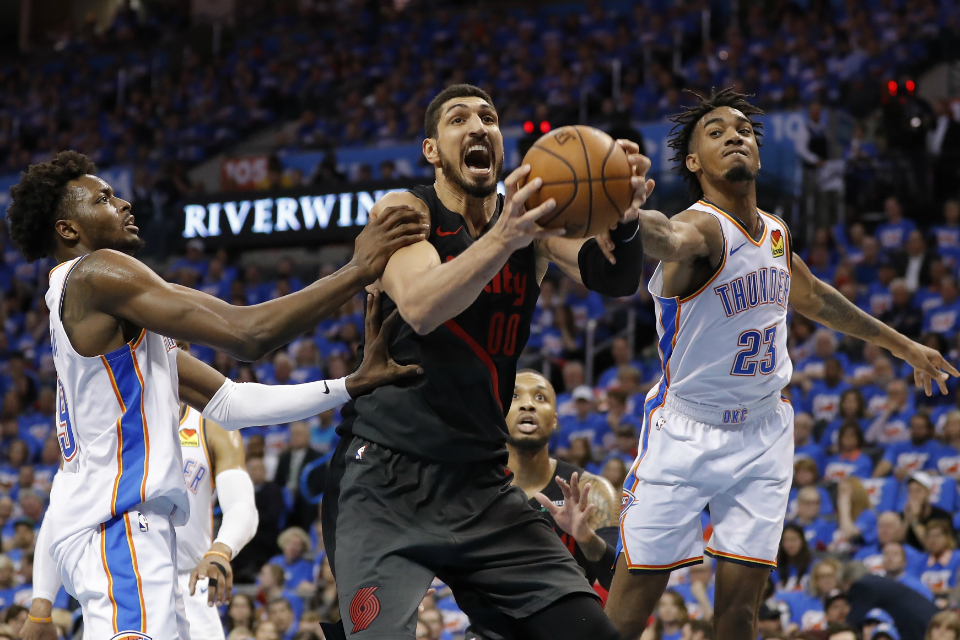 PORTLAND, Ore. (AP) — Trail Blazers center Enes Kanter's status for the second round of the playoffs remains uncertain because of a shoulder injury as Portland waits to learn its opponent.

Kanter says he separated his left shoulder early on during Portland's deciding Game 5 against Oklahoma City on Tuesday in the opening round. The Blazers returned to practice Friday.

Kanter was shooting during the workout, although at times he rubbed the shoulder.

We're just taking it day by day, see how it feels.

"I think the Blazers are doing a very good job taking care of it. But, I mean obviously, I'm not going to lie, it hurts pretty bad," he said. "I mean I'm having a hard time changing my shirt or eating food. So it's a process. We're just taking it day by day, see how it feels."

Despite the injury, Kanter had 13 points and 13 rebounds in Portland's 118-115 victory over the Thunder, which sent the Blazers through to the Western Conference semifinals.

The Blazers will play the winner of the first-round series between the Nuggets and the Spurs, which is tied at 3-3. Game 7 is Saturday night in Denver.

Blazers coach Terry Stotts said he was hopeful Kanter could play in Game 1, set for Monday regardless of the opponent. He said the extended break — Portland was the first team in the West to advance to the next round — will help.

The good thing is we don't play until Monday, so we don't really have to make any decisions until then. So we're hopeful.

"I know it's too early," Stotts said about the decision. "The good thing is we don't play until Monday, so we don't really have to make any decisions until then. So we're hopeful."

Kanter, 26, has had a somewhat turbulent season already. He was waived by the New York Knicks following the trade deadline. Once a starter, he fell out of the rotation altogether when New York — which finished with the worst record in the league — turned its focus to younger players.

He was signed by the Blazers just before the All-Star break as a backup to starter Jusuf Nurkic.

But Kanter became vitally important for Portland when Nurkic broke his leg in an overtime victory at home over the Brooklyn Nets on March 25. Nurkic was averaging 15.6 points and 10.4 rebounds a game this season.

Kanter averaged 13.1 points and 8.6 rebounds in 23 games down the stretch with the Blazers, including eight starts.

In the playoffs, he is averaging 13.2 points and 10.2 rebounds. In Game 1 against the Thunder, he had 20 points and 18 rebounds and was dubbed the game's MVP by teammate Damian Lillard.

He has faced challenges beyond the court as well. A native of Turkey, Kanter missed a game in Toronto shortly after joining the Blazers because he thought his life might be in danger if he left the United States. As a result of his criticism of Turkish President Recep Tayyip Erdogan, Kanter had been labeled a terrorist by his native country. His passport was revoked and Turkey has reportedly issued a warrant for his arrest with Interpol.

For now, Kanter is working out lightly and doing some lifting. The concern isn't just whether he can play through the pain, but whether there's a chance for further damage, he said.

He said he will work with the team's trainers and see how the shoulder feels.

They just said it's a separation, it's normally around a month to just heal it.

"They just said it's a separation, it's normally around a month to just heal it," he said. "But I mean, you don't have a month to take off, so I'm just going to push through it."