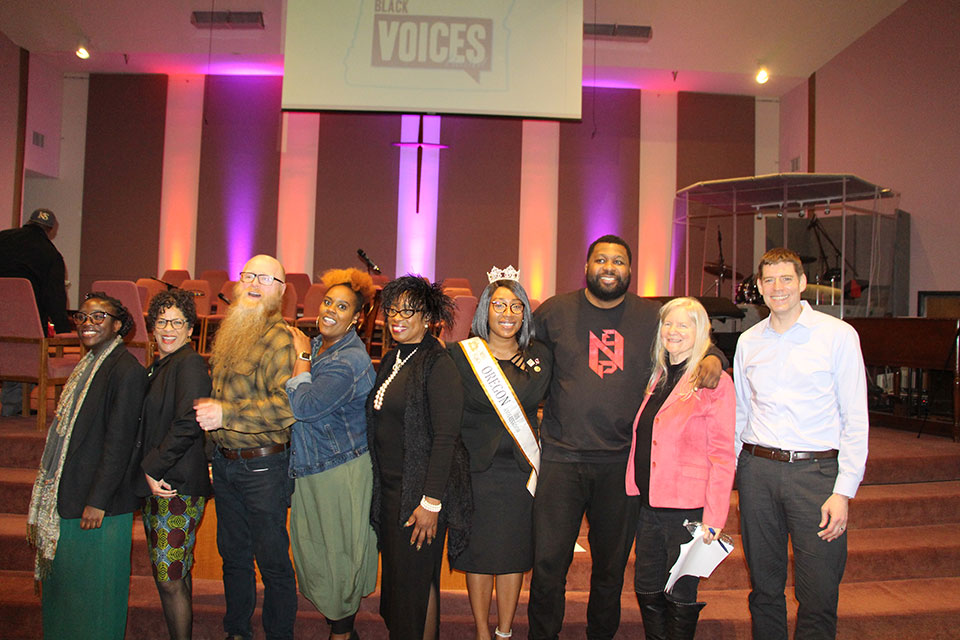 Five candidates for the board of Portland Public Schools gathered at Maranatha Church on April 13 to address issues of racial inequity in the district.

“These seven folks hold an enormous amount of power,” Watson told the crowd.

School board positions are four-year terms that are unpaid but notoriously time-consuming, with previous board members comparing them to full-time jobs, often with overtime. Only one incumbent, Amy Kohnstamm of Zone 3, is running for re-election.

Watson emphasized that Black Voices United aims to be a safe place where Black community members can ask questions they might feel intimidated to ask elsewhere. During the two-hour event, Thompson gave candidates two minutes each to answer audience-submitted questions in addition to questions drafted by the organization.

Andrew Scott, the deputy chief operating officer at Metro and former director of the Portland City Budget Office, is running unopposed in Zone 1. A PPS graduate, Scott said he grew up at a time of relative prosperity in the district -- aware that it was not evenly spread.

“We owe the entire district and community the same opportunities I had,” he told the audience, later criticizing the lack of wraparound services available to students who are often dismissed as disruptive, adding, “How do we decriminalize the behavior of our students?”

Scott will be replacing Julie Esparza Brown, the only current school board member of color. Scott, who is White, said he had waited to file, hoping other candidates from more diverse backgrounds would enter the race.

Similarly, Robert Schultz, an event coordinator running in Zone 7, praised Zone 2 candidates Shanice Clarke and Michelle DePass, saying he would not have entered the race if either of them were running in his zone.

Clarke, the youngest school board candidate, is program coordinator for the Pan-African Commons Student Center at Portland State University. She consistently emphasized the efficacy of restorative justice in schools and its notable reduction on the rate of student suspensions. She identified herself as someone who had “experience with trauma that interrupted schooling,” and addressed the stark disparity in how often students of color are disciplined compared to their White classmates.

“I don’t want to see kids under seven being suspended,” she said to applause.

DePass is the community engagement and policy coordinator for the director of the Portland Housing Bureau. She said she comes from a family of PPS teachers that is also a “prison-affected” family, and spoke of hiring more Black teachers with equally high expectations for every student.

“We need better teacher training on how to deal with Black boys in particular,” DePass said, adding that in doing classroom observation, she often noticed “problems of interpretation” in how teachers responded to students of color.

Deb Mayer, a former educator and current education activist, is running against Amy Kohnstamm and Wes Soderback in Zone 3. She advocated for a shift away from a focus on “standardized tests with high stakes,” and advocated getting more Black teachers in classrooms.

According to Watson, Kohnstamm said she was not able to attend the forum due to a scheduling conflict, and frequent candidate Soderback did not respond to Black Voices United’s invitation to the event.

Schultz is the father of three whose son recently battled leukemia. He said that dealing with PPS as he negotiated his son’s individualized education Program plan was an obstacle in itself. He criticized a lack of programming and representation across the district, while acknowledging his privilege as a White man.

“I see a bunch of people missing from the conversation,” he said, detailing what he viewed as a lack of engagement from the district and school board. “They expect us to go to school board meetings and tell them.”

Zone 7 candidate, pastor Eilidh Lowery, was unable to attend the event. Watson told The Skanner that Lowery provided a video reflecting her views, and sent two staffers in her place to speak on her behalf.

“We thought that was a great show of solidarity in the effort to be present for a community that often feels excluded,” Watson said.

The Portland Public School board general election is May 21.