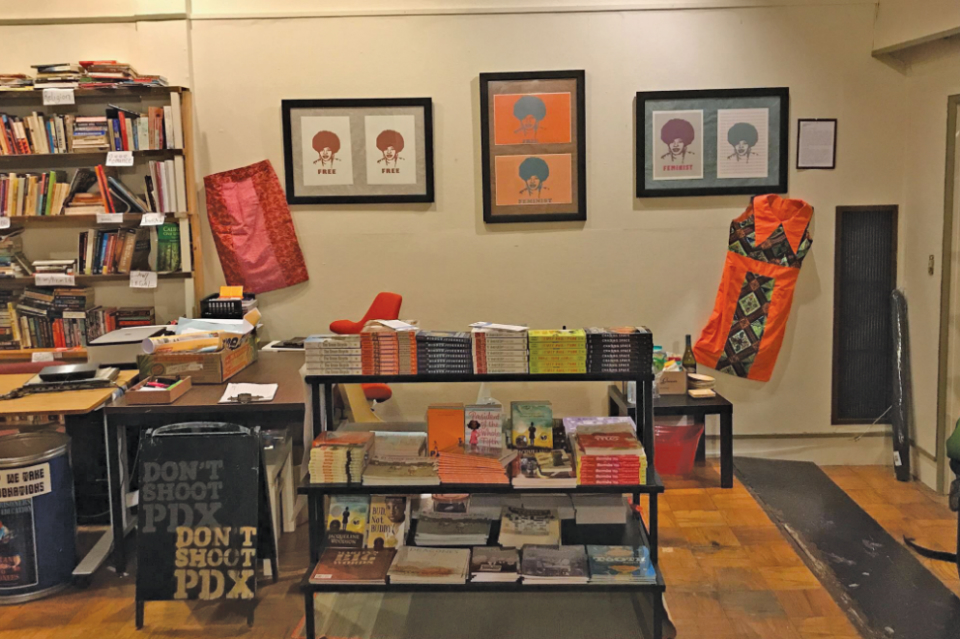 When Don’t Shoot PDX opened a second office at 14 NE Killingsworth earlier this year, founder Teressa Raiford envisioned it as a venue to legally empower vulnerable members of the community.

“We have anti-racism laws in the country, we have anti-discrimination laws,” Raiford said during a public brainstorming session at the offices of Don’t Shoot PDX on April 4. “But if you don’t have access to legal support, you can’t defend yourself.”

To that end, Don’t Shoot PDX will launch its Community Legal Referral Services program by the end of spring.

Raiford says her organization, launched in 2014, is known for bringing together agencies and citizens interested in de-escalating violence in the community. Organizing a comprehensive network of legal resources and passionate attorneys “seemed like a perfect fit,” she added.

“We’ve been doing a lot of ‘Know Your Rights’ training since 2015,” Raiford said. “We’ve helped people file complaints and indictments.”

In order to stay on the right side of the law while connecting community members with legal advice, Don’t Shoot PDX consulted with attorney Melissa Chinn of Kauffman Kilberg LLC to structure the referral program.

“(Raiford) thought about doing a legal clinic,” Chinn told The Skanner, “but the thing about a legal clinic is it operates much like a law firm, and then you have to follow the regulations that exist for every law firm,” like securing legal insurance. “In doing a legal referral service, she can still help people without having to jump through those hoops.”

“In providing services, we wanted to figure out what was most sought-after in the community, because although Oregon state provides some indigent criminal defense, there are a lot of legal issues they can’t provide discounted legal services for,” Chinn said.

In January, Don’t Shoot PDX released a survey to identify the community’s most pressing legal needs. In addition to numerous requests for aid in immigration, employment, housing, and discrimination issues and police violence, survey results revealed other, less obvious gaps in representation -- for example, many parents of special-needs students said they were struggling to navigate individualized education program plans, and to know and enforce their children’s rights within schools.

Respondents also emphasized the need for a monthly housing legal clinic, which is where Legal Aid staff attorney Christina Dirks comes in.

“We know that the housing crisis right now is not only a crisis of affordability, but it’s a racialized housing crisis,” Dirks said during the April 4 meeting at Don’t Shoot PDX offices. “And it’s about gentrification and it’s about fair housing violations, and so assistance is critical right now. But also, I think there’s very clear and obvious structural reasons why folks don’t come to lawyers, because people aren’t trusting these organizations, for very good reason given historical issues and current issues.”

Dirks said organizations like Don’t Shoot PDX were in a unique position of trust in the community, and could “assist in doing the hand-off between someone that needs the help, and a lawyer that wants to help and is hopefully culturally more sensitive and aware of the issues.”

“For a lot of people, the retainer upfront can be the difficult part,” Chinn said. “There are attorneys (in the community) who are willing to waive their retainer fee, or set up a payment plan” or offer reduced rates. ”Working in conjunction with Legal Aid, we’re just trying to expand what is available.”

Those seeking legal resources will be able to fill out an intake form either on Don’t Shoot PDX’s website or at the organization’s office, where the information will be used to pair them with an appropriate attorney from the organization’s directory. Applicants can expect follow-up from a member of the organization, Chinn said.

“As political activists, we’re always fighting for what needs to be done,” Raiford said at the brainstorming session earlier this month. “We’re always fighting to remove barriers and also to improve access. I think this partnership will help us build a kind of the resistance that we need, and the outreach we should be doing.”

Don’t Shoot PDX invites attorneys and members of the community to offer feedback or volunteer services through their online legal referral services survey.