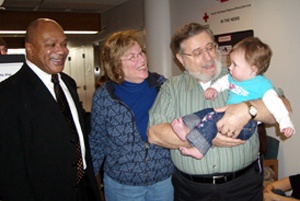 For the Weiss/Parker family, each New Year means another opportunity to continue a precious family tradition: giving blood at the Red Cross along with their relatives the Parkers. This year, on Jan. 5, Dr. T. Allen Bethel and Charles W. Hunter Sr., community activists and ministers came to the American Red Cross donor center in North Portland to learn how giving blood has become a 33-year tradition for this Oregon family.
Morris Weiss inaugurated the custom in 1976 by as a "Living New Year's Resolution to give the "Gift of Life."  During his lifetime he donated 22 gallons of blood.
Since his death, four generations of the Weiss/Parker family have continued the tradition, giving more than 1,217 blood donations.  The blood they donate helps save the lives of patients, who need transfusions after severe blood loss, such as in an accident or to help them recover from life-threatening illnesses.
Few people know that each blood donation can help to save three lives.
After meeting the Weiss/Parker family and watching them give blood, Rev. Bethel and Pastor Hunter decided to issue a public challenge to everyone in the community to start up a similar tradition with their own families.
"I am an avid believer that we all have to give back, and giving blood requires such a short amount of time to make a difference in someone else's life," said Hunter, a 30-year teaching veteran with Portland Public Schools and senior pastor at Neighborhood Church of God in Portland.
"The first time I heard about the Weiss/Parker family I was watching TV and saw a story about their family donation," he said. "Since then I have been very impressed by them, and at my own family reunion we are talking about doing this ourselves to set an example for the young kids in our family."
Blood compatibility is not based on race, but some rare blood types, such as U-negative and Duffy-negative, are unique to the African American community and occur in a large number of individuals. Many African American patients need these rare blood types – blood that only can come from African American donors. That's why it is essential that African Americans donate blood.
In Portland, African Americans make up approximately seven percent of the population, but just two percent of the city's blood donors.
African American donors also often provide uniquely compatible blood for African American patients with rare blood diseases, including sickle cell anemia, leukemia, cancer and kidney disease.
Dr. Bethel, senior pastor of Maranatha Church, hopes African Americans also will be inspired to consider becoming organ donors. Dr. Bethel is one of 73,181 people in the United States currently awaiting a life-saving kidney transplant. He has been on the list for a transplant for a year and a half, along with 344 other people in Oregon and Southwest Washington who are still waiting a kidney match.
"By becoming a regular blood donor and becoming a registered organ donor, you can give a gift that keeps on giving," says Bethel. "Your gifts will keep on making a difference in the lives of others."
Bethel and Hunter are asking community members to sign up for the organ donor registry at the fifth-annual Martin Luther King, Jr. Blood and Organ Donor Registry Drive. This special event will be held from 7:30 am to 1 p.m. Saturday Jan. 26 at the American Red Cross, 3131 N. Vancouver Ave. Donors should call 503-284-4040 to schedule a donation appointment.
The American Red Cross, Donate Life Northwest and The Skanner newspaper are sponsoring the program.
At the Martin Luther King Jr. blood drive, community members can donate blood, learn more about organ donation, and sign up for the donor registry at the blood drive. Each donor will receive a complimentary Martin Luther King, Jr. special-edition pin, while supplies last. There will also be a drawing for a $100 Safeway gift card and free hypertension and obesity screening.
For those who cannot attend the drive but are interested in signing up for the organ donor registry, Donate Life Northwest provides an online registry form on their website for use by anyone age 13 and older. There is no upper age limit for donors. The form can be found at www.donatelifenw.org.
Anyone 13 or older can register, but parents or guardians of anyone age 13 to 17 will still have the final decision making power at the appropriate time.
Signing up for the Organ Donor Registry is a simple and important process that should be done in addition to obtaining the well-known D designation on one's driver license. While a D designation on a driver's license is considered intent to donate, signing up on the registry is considered consent to donate, and for individuals 18 and over does not require the signature of another person.
Also, by signing up with the registry, a donor's information and consent can be obtained more quickly during the critical hours when a match to a recipient can be identified.
According to Donate Life Northwest, 18 people in the United States die each day waiting for an organ transplant, and the number of men, women and children waiting for an organ transplant is close to 100,000.
One person who signs up on the registry could potentially save more than 50 other people: the lives of people suffering from organ failure, bone defects, burns or blindness. Donation can dramatically improve—even save—the lives of those waiting for transplants of eyes, skin, bone, tendons, heart valves, kidneys, hearts, lungs, livers and more.
Dr. Martin Luther King, Jr. Blood and Organ Donor Drive: 7:30 am to 1 p.m. Jan. 26 at the American Red Cross, 3131 N. Vancouver Ave. Call 503-284-4040 to schedule a donation appointment.