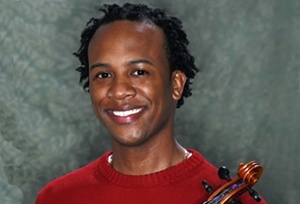 Quinton Morris, violinist and founder of The Young Eight String Octet, America's only all African American string octet, will join Associate Conductor Carolyn Kaun as she leads Seattle Symphony in several free community concerts.
"We wanted Quinton to be part of our ACCESS community concerts this season due to his ongoing commitment to bringing classical music to underserved populations," said Nancy Gosen, Seattle Symphony director of education. "Quinton is a great example to kids everywhere who has succeeded in achieving his dreams and who continues to give back to his community. We welcome him back to Seattle."
Morris, a native of Renton, enjoys a multifaceted career as a concert violinist, chamber musician, teacher and director and founder of The Young Eight String Octet. Morris recently returned to the Northwest and currently serves as Director of Chamber and Instrumental Music and Music Professor at Seattle University.
Two programs will be presented, the first of which includes performances at 8 p.m. Friday, Jan. 11 at West Seattle High School, 3000 California Ave. S.W. and at 7 p.m. Thursday, Jan. 17 at South Park Community Center, 8319 8th Ave. S. Works by Rossini, Beethoven, Mozart and Mendelssohn will be performed.
The second program will be performed 7:30 p.m. Wednesday, Jan. 23 at Langston Hughes Performing Arts Center, 104 17th Ave. and at noon Friday, Jan. 25 at Seattle City Hall, 600 4th Ave. These performances include an all-Mozart program. All concerts are free and open to the public.
The Young Eight is America's only string octet comprised of African American string players from the nation's prestigious music schools and conservatories. This season, the octet returns to New York for concerts at York College's Distinguished Artists Series, Music Mondays Chamber Music Series and a host of residencies. Concert debuts include recitals in Chicago, Philadelphia, Las Vegas, Atlanta and Washington D.C. The octet has served as Artists in Residence at a number of universities and chamber music societies, including the University of Washington World Series, York College Distinguished Artists Series, and others. The Young Eight received a Medal of Honor from the United States Military for their commitment to public and community service.
The free concerts are part of Seattle Symphony's ongoing ACCESS Project (Artistic and Cultural Community Engagement with the Seattle Symphony) dedicated to bringing classical music to people throughout the region. In 2006, the ACCESS Project received the MetLife Award for Excellence in Community Engagement, a program administered by the American Symphony Orchestra League.