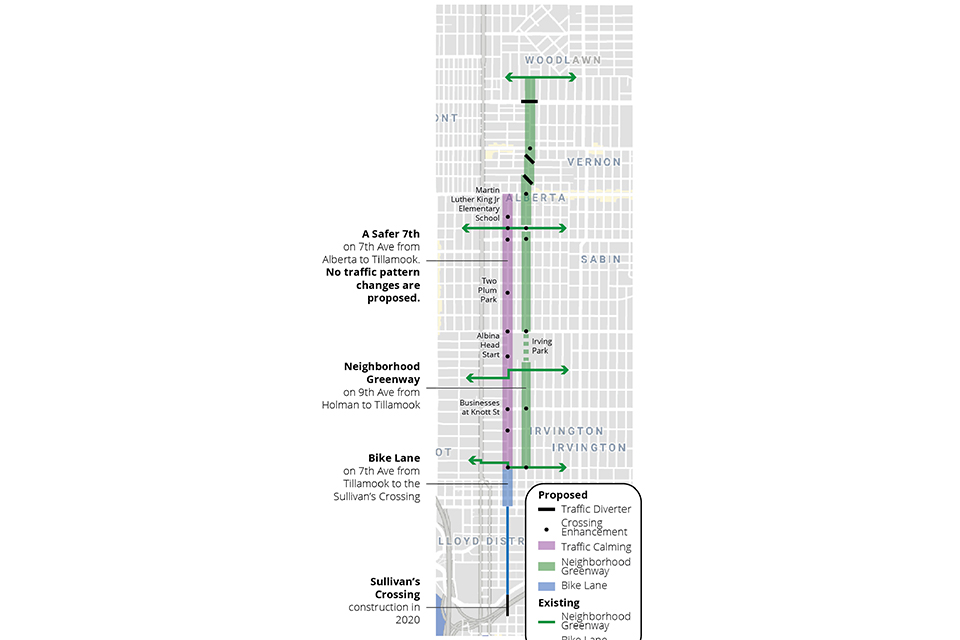 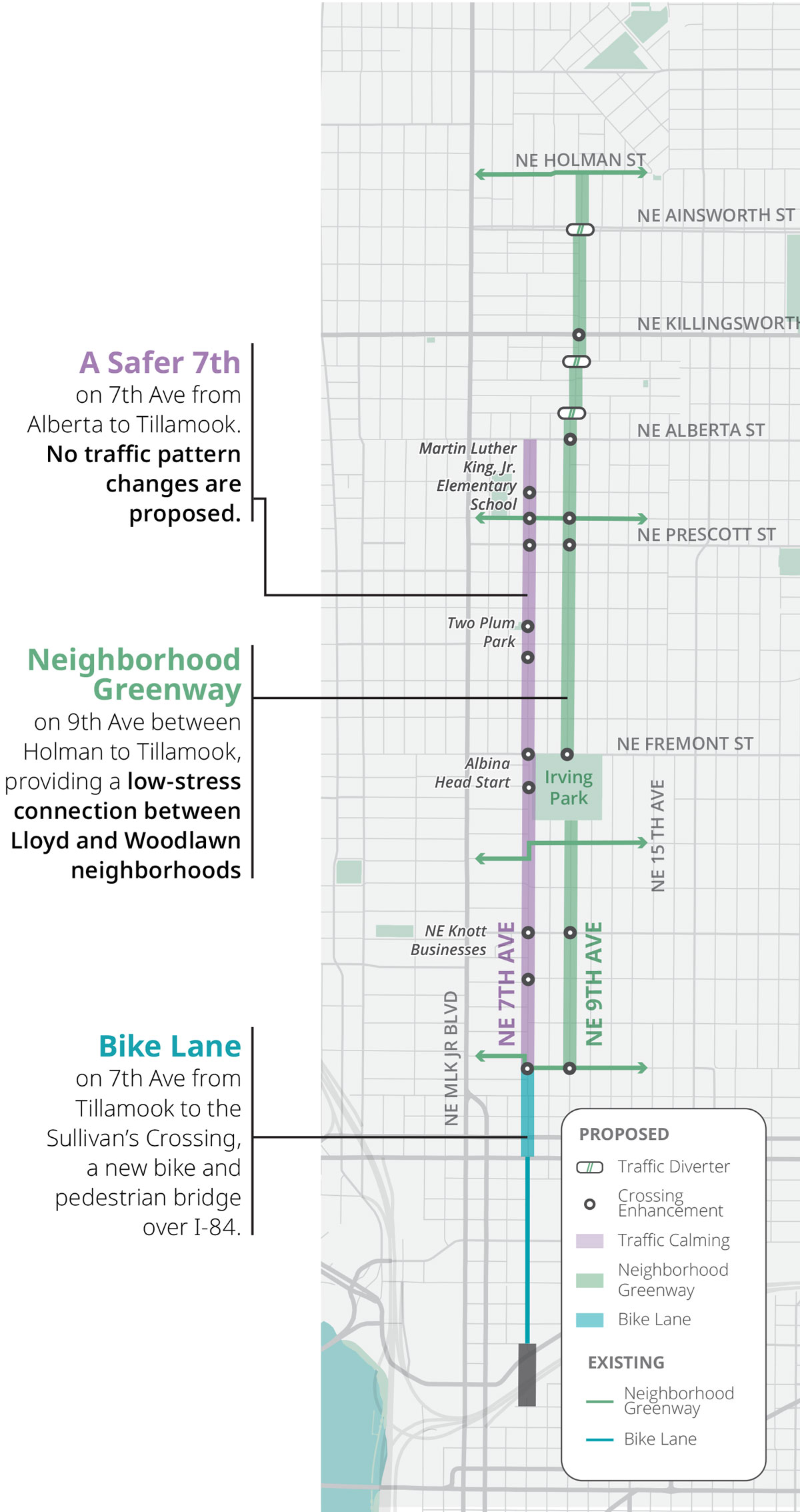 Click above image for larger printable map.The Portland Bureau of Transportation has released its plan for a new bike way in Northeast Portland – a project that generated controversy last summer and fall about the agency’s outreach efforts, as well the possibility of altering Northeast 7th Avenue to create a neighborhood greenway.

The resulting plan is what PBOT spokesperson Hannah Schafer describes as a “twofer” – a hybrid route using both Northeast 7th Avenue and Northeast 9th Avenue to connect the Woodlawn Neighborhood to the Lloyd District.

Northeast 9th Avenue will become a neighborhood greenway – defined by PBOT planner Nick Falbo as a “safe, calm street for walking and biking” with shared lane markings (sometimes called “sharrows”) on the street, extra marking at intersections to aid bike and pedestrian intersections and traffic diverters at high-traffic intersections.

And Northeast 7th – previously considered for development as a greenway – will undergo a series of improvements to make the route safer: safer crossings at intersections near schools and areas with high levels of pedestrian activity and enhanced crossing markers at some intersections. The agency will also add speed bumps to slow traffic at certain locations, including Albina Head Start and King Elementary School.

Falbo said PBOT plans to remove some of the roundabouts on 7th in the Irvington neighborhood – which were intended to slow traffic but create pinch points instead -- and will add bike lanes on some sections of the street, including a lane connecting Tillamook to Weidler. Also under consideration: bike lane markers on sections of the street where cyclists are climbing a hill and therefore moving more slowly, so they can safely move out of the way of cars as they ride.

Eventually, the route will extend to southeast Portland via the Sullivan’s Crossing Bridge, a bridge that will cross Sullivan’s Gulch and be open to bicycles, pedestrians and emergency vehicles.

“The outreach process and the work that Nick and the planning team has done on this has really led to a great sort of resolution and, essentially, a bigger win than we would have ever gotten from choosing one street over the other. And it’s really the result of all the wonderful feedback that we’ve gotten from the Black community, from neighborhood associations – from everyone. Without having that participation, I don’t think this project would have been as well thought out without that feedback,” Schafer said.

Falbo noted that Northeast 7th sees an unusually high level of bike traffic, probably due to its proximity to Martin Luther King Jr. Blvd., and that’s why PBOT is still pursuing changes on the street that would better accommodate cycling. But, he said, Northeast 9th Avenue better meets the criteria for a neighborhood greenway: it’s parallel to a major thoroughfare, provides access to a lot of amenities and sees a relatively low volume of traffic (1000 or fewer cars per day).

But as The Skanner reported last August, outreach efforts were slow in reaching households of color, and some members of the Black community were critical of making Northeast 7th a neighborhood greenway due to the high volume of car traffic on the street. The agency subsequently convened focus groups with institutions like SEI – which draws Black families from around the metropolitan area to Northeast Portland for services – as well as the SOUL District Business Alliance, the Portland Community Reinvestment Initiative and individual stakeholders.

“I think PBOT has addressed community concerns,” said Ron Herndon, director of Albina Head Start, which is headquartered at Northeast 7th and Fremont, who previously expressed concern that a bike lane would make it difficult for families dropping children off at the facility. “They listened to those concerns with a degree of seriousness that is uncommonly rare with city, county and state governmental institutions.”

The transportation advocacy group The Street Trust, in a statement submitted to The Skanner, also expressed support for the Northeast 9th Avenue greenway, and praised PBOT for reaching out to communities of color.

“Martin Luther King Elementary School, Albina Head Start, and Northeast Community Fellowship Church are all located on NE 7th Avenue and persist in serving people of color even as massive economic displacement has changed the demographics of the surrounding neighborhood,”  wrote Jillian Detweiler, executive director of The Street Trust. “Understood through this lens, a street design intended to limit automobile access would symbolize the City's intention to further exclude people of color from neighborhoods that less than 20 years ago had concentrations of African American households.”

Detweiler added that a 9th Avenue greenway “can deliver the low-car experience needed to make a variety of cyclists feel comfortable without disrupting access to institutions serving people of color.”

“PBOT was proactive in getting the feedback of our community. They listened to the good, the bad and the ugly -- but most importantly they just listened,” said Anthony Deloney, director of strategic initiatives for SEI. “We appreciate that our feedback was heard and are hopeful it will be used throughout the implementation.”

Falbo said PBOT is planning on having an open house in the future to unveil final plans and make the public aware of the coming changes.

To stay updated on the Lloyd to Woodlawn project, visit PBOT's page to subscribe to email updates.