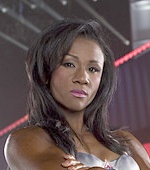 A local Washington woman is one of the new "American Gladiators." The classic competition show that sets everyday people, who excel and take pride in their physical fitness, against the show's Gladiators, returned to the airways this week after a 20-year hiatus.
Tanji Johnson, from Renton, is among the 12 new Gladiators, six men and six women, ready to take down the contenders hoping to win a $100,000 prize, a 2008 Toyota Sequoia, and where one man and one woman will become a Gladiator the next season after competing in a series of challenges.
The new version of "American Gladiators," the hit TV show that ran for seven seasons from 1989-1996, features hosts Hulk Hogan and Laila Ali and 24 contenders, 12 men and 12 women, who will compete against the Gladiators. Just as in the previous "American Gladiators," everyday amateur athletes will face-off against the Gladiators in a series of contests of physical strength and endurance and include the classic events such as Powerball, Joust, The Wall, Hang Tough, Gauntlet and the Eliminator, along with two new events including the Earthquake and Hit & Run. The classic games have been upgraded using new twists including special effects, water and fire, and the latest technology.
"I'm very excited to be a part of the team," Johnson said. "When you think of the American Gladiators you think of a team of people who are elite athletes. Most of them are professional athletes, who, in addition to having the athletic ability, have a personality and the attitude that is very competitive."
In Sunday night's opening premier, Johnson, whose gladiator name is Stealth, put a contender named Jessica out of the game when she suffered a knee injury in Powerball when Johnson (Stealth) unleashed a hard hit, tackling her and knocking Jessica down to the floor.
Johnson, 32, is a professional fitness competitor and model who started competing in 1998. The 5'3, 123-pound athlete, is also an IFBB Fitness Pro, a leading fitness/figure coach, writes for fitness magazines, co-promotes shows in Vancouver, Wash. and has launched her own clothing line called ExcellentSpirit.
Johnson is a self-described military brat who was born in Germany and also lived in Korea. She attended high school in South Carolina and college at the U.S. Air Force Academy, beginning her career serving as admissions officer in the minority enrollment department. Johnson said she loved the job but realized that most students don't understand the difference between the enlisted core and the officer core.
When she would go visit inner-city schools, she had to explain to them that she wasn't there to enlist the students, but to explain to them about the opportunity to attend one of the most prestigious colleges in the country.
Johnson served five years as an aircraft maintenance officer where she was responsible for the maintenance and management of the KC-135 Aerial Refuelers. During her last three years in the military, she was stationed at Fairchild AFB in Spokane, Wash. Johnson holds a Bachelor of Science degree in Humanities.
Johnson first heard about the reemergence of the "Gladiators" in September while training at a gym in Bellevue when she received two phone calls from friends encouraging her to tryout for the show. Johnson initially thought her 5'3 stature was too small for the show. She is smaller than the previous female Gladiators, but after thoughtful consideration, she thought this would be the perfect fit for her.
"I didn't even know the show was coming back but as soon they said the name of the show I thought 'oh that brings back memories' and I just started thinking about my background and who I was and I thought this is very me … so me it's scary," Johnson laughed.
Johnson said she thought her background as a fitness competitor — which includes gymnastics, cheerleading, dance, weight training, track and military background — would be a perfect fit for the show's games. Johnson says many games are almost like going through a military obstacle course, so she knew being an "American Gladiator" would be a fun adventure.
After going though several casting calls and auditions in Los Angeles that included physical fitness tests and television interviews, the producers narrowed it down to a pool of finalists who were then sent to a week-long training camp.
"We trained everyday extensively from about 7 or 8 in the morning to 6 at night, and it was very physically demanding and exhausting. In addition to that, you're around the same 12 people everyday and that's why it felt like basic training," Johnson said. "I felt like I'm in a situation where we have a mission, just like in the military, and we're all trying to work as a team and excel individually. There's a lot of pressure involved, but you have to stay very focused on the mission."
Johnson said all the men and women Gladiators get along and that it has been a great learning experience for everyone.
"Training camp was a great experience, it is where we got our unit cohesion and where we gelled and came together as a team," Johnson said. "People always ask 'Do you get along with the other Gladiators?' and I say, 'absolutely, they feel like family.'"
Johnson said she is very good at contact events and her favorites include the Powerball and the Pyramid.
"I'm really aggressive and very fast with my feet," Johnson said. "The producers have said that I'm the fastest girl on my feet in terms of agility, speed and movement..."
So all you contender hopefuls, watch your back, Stealth will be eluding detection and tracking systems and will be flying in under the radar for the surprise attack.
"American Gladiators" airs from 8 to 9 p.m. Mondays on NBC.
Sidenote: One of the upcoming contenders is an Oregonian named Monica Carlson, a 32-year old mother of 8-year old twins and a former Portland Trailblazer dancer. She resides in Milwaukie, just outside of Portland.