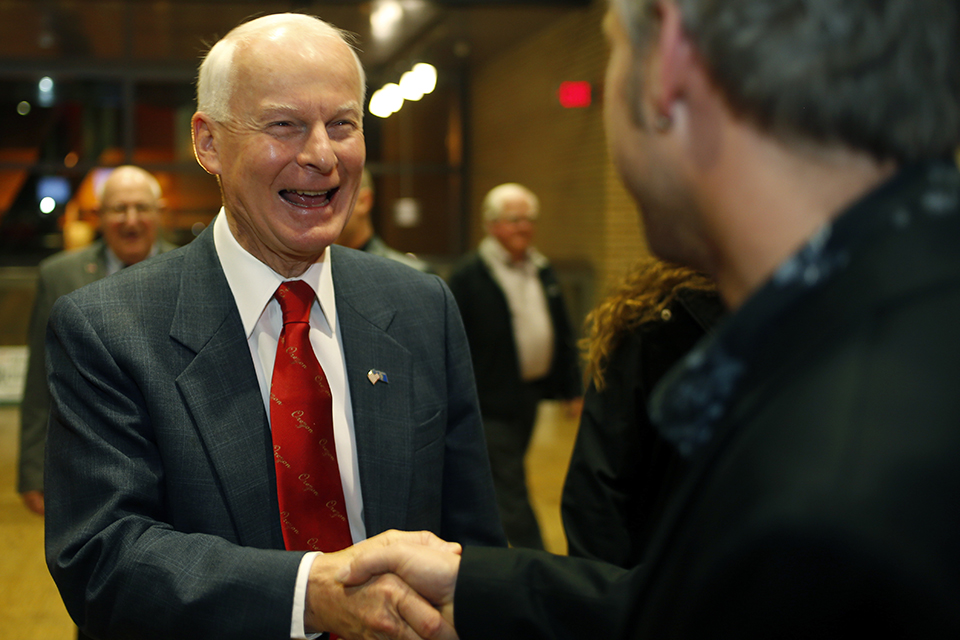 SALEM, Ore. (AP) — Secretary of State Dennis Richardson, the highest-ranking Republican in Oregon state government, has died after a battle with brain cancer. He was 69.

Richardson's office said in a statement that he died at home Tuesday night surrounded by family and friends.

Richardson announced in June that he had been diagnosed with brain cancer in May. As he battled the disease, he kept working, encouraging Oregonians to register to vote, using social media as a pro-democracy tool and overseeing audits done by his office's audit team. As secretary of state, Richardson was Oregon's top elections official.

Gov. Kate Brown ordered all flags at public institutions to be flown at half-staff in honor of Richardson.

Brown will appoint Richardson's successor. In a statement her office said she would make a choice in the coming weeks and would consider a Republican who commits to not entering the 2020 election.

"Regardless of what side of the aisle his colleagues sat on, we all knew Dennis' kind heart guided his career of service to the people of Oregon," Brown said.

A combat helicopter pilot during the Vietnam War, Richardson, 69, stood up for veterans, including appearing in a video on Oct. 5 promoting a business luncheon aimed at giving them more business opportunities.

He supported diversity, promoting a "Black in Oregon, 1840-1870" exhibit this year at the Oregon State Archives, an agency of his office.

"It reminds us that, although we have come a long way on the path of freedom and equality, we still have much to do if we truly are committed to 'liberty and justice for all,'" he wrote.

Richardson and his wife Cathy have seven daughters, one of them adopted. As such, he paid special interest to the state's substandard foster care system. An audit conducted by his office, released in February, said caseworkers were strained to the breaking point amid a drop in available foster homes for 11,000 youngsters and cited management shortcomings.

On Aug. 28, he appeared in a video on his office's Facebook page, speaking in a hoarse voice and saying he was fatigued from the strong medications he was receiving, but insisting he was doing well in fighting the illness while fighting for Oregonians as secretary of state.

But on Oct. 16, he advised his two colleagues on the State Land Board, Brown and state Treasurer Tobias Read, that he was not well enough to attend a scheduled meeting the next day. He assigned Deputy Secretary of State Leslie Cummings to attend the meetings for the duration of his cancer treatment.

Richardson was elected to the second-highest office of the state in 2016, two years after running unsuccessfully for governor as the Republican nominee, losing to Democrat John Kitzhaber. He earlier on was elected to the Oregon House of Representatives in 2002, where he served six terms for 12 years.

A practicing member of The Church of Jesus Christ of Latter-day Saints, Richardson received his bachelor and law degrees from Brigham Young University. He then set up a law practice in the Central Point, Oregon, where he worked for more than 30 years.

"Dennis was a steadfast man who loved family, his country, the State of Oregon, and the people he served," Wilson said.