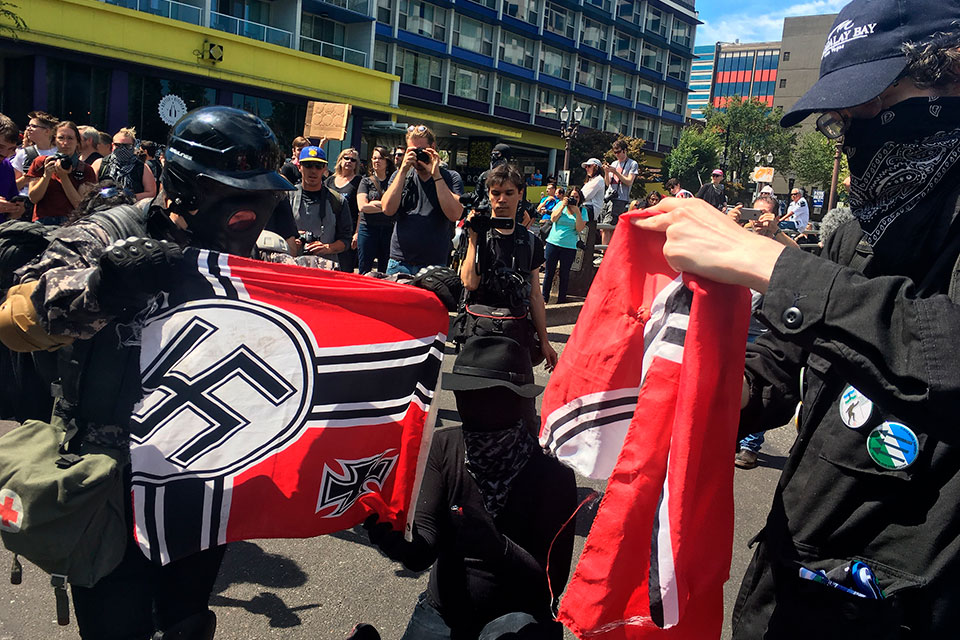 PORTLAND, Ore. (AP) — The city of Portland, often in the spotlight for its liberal leanings, has been roiled by the revelation that a police lieutenant in charge of containing protests texted repeatedly with the leader of a far-right group involved in those demonstrations.

The mayor asked the police chief Friday to investigate "disturbing" texts between Lt. Jeff Niiya, who is the head of the Police Bureau's rapid response team, and the leader of a Washington-based group called Patriot Prayer that has repeatedly crossed into Oregon to stage right-wing rallies and marches.

The events in Portland and other West Coast cities routinely draw crowds of self-described anti-fascists, who show up in force to try to shut down leader Joey Gibson and his followers.

Police have struggled to contain the violent clashes and residents have grown used to events that shut down streets for hours, leave downtown windows shattered and end in open brawls, fires, injuries and dozens of arrests.

The text messages , first obtained by the Willamette Week newspaper through a public records request, show Niiya communicating with Gibson before, during and after those clashes.

In texts spread over months, Niiya at times details the movement of a rival anti-fascist protest group, warns Gibson by text that a friend of Gibson who is a member of a documented hate group could risk arrest by showing up in Oregon and congratulates Gibson on his decision to run for an open U.S. Senate seat in Washington state.

"The hate against me will multiply because I am running for office, so when I come into Portland and Seattle the energy will be high. I know it's a pain in the ass for you guys, but I will do the best I can to work with you," Gibson texted Niiya on Jan. 22, 2018.

After learning Gibson was a candidate, Niiya responded: "I won't say anything. Thank you for trusting me and letting me know. I appreciate it."

It's not unusual for police to talk with those organizing protests in advance to work on planning, which makes it harder to say if these texts were out of line without hearing Niiya's account, said Heidi Beirich, director of the intelligence project at the Southern Poverty Law Center, an organization that tracks hate groups and extremist activity.

But the texts did seem "odd for their chattiness," she said, and warrant an investigation.

While Patriot Prayer is not considered a hate group, its members often align themselves with known hate groups and white supremacists, she added.

The Portland Police Commanding Officers Association said in a statement Friday that Niiya was following orders by establishing communication with Gibson. The Willamette Week reported that Niiya texted with an anti-fascist protester as well in 2017 — communications that led to that person being disowned by her fellow activists.

"Everything was about de-escalating and avoiding conflict. It was his job and he does that with several activists," Gibson said in a phone interview on Friday.

"There were several times when he was literally begging for me to leave Portland — and on numerous occasions, I would do it."

In a statement, Portland Mayor Ted Wheeler said police must remain objective and that the texts appear to "cross several boundaries."

"They also raise questions about whether warrants are being enforced consistently and what information is being shared with individuals who may be subject to arrest," he said.

In one text, Niiya tells Gibson he does not see a need to arrest Gibson's assistant, Tusitala "Tiny" Toese, who often brawls with anti-fascist protesters, even if he was the target of a warrant, unless Toese committed a new crime. Toese is a member of the Proud Boys, a documented hate group.

"Just make sure he doesn't do anything which may draw our attention," Niiya texted Gibson on Dec. 9, 2017. "If he still has the warrant in the system (I don't run you guys so I don't personally know) the officers could arrest him. I don't see a need to arrest on the warrant unless there is a reason."

Portland Police Chief Danielle Outlaw said in a statement that an internal review would be conducted to determine if policies were violated.

"If anything is identified that is deemed outside of our values and directives, it will be addressed," Outlaw said.

Niiya will no longer work with police department's rapid response team during the investigation, police said in a statement, and a community "listening session" was scheduled by the police for next week.
City Commissioner Jo Ann Hardesty said the "broken policing system in Portland" must be addressed.

A community listening session has been scheduled for Thursday, February 21, 2019, from 6:00 - 8:00 p.m. This event will be hosted at the Maranatha Church located at 4222 NE 12th Avenue. The goals of the listening session are to hear concerns and solutions from the public. There is nearby parking and the use of public transportation is encouraged. "It is imperative that we come together to hear people's concerns and ideas," said Chief Danielle Outlaw. "2019 is a year for solutions. We would like for the public to have the opportunity to share with the Portland Police Bureau their ideas for how to move forward." Chief Outlaw and Mayor Wheeler will be in attendance.