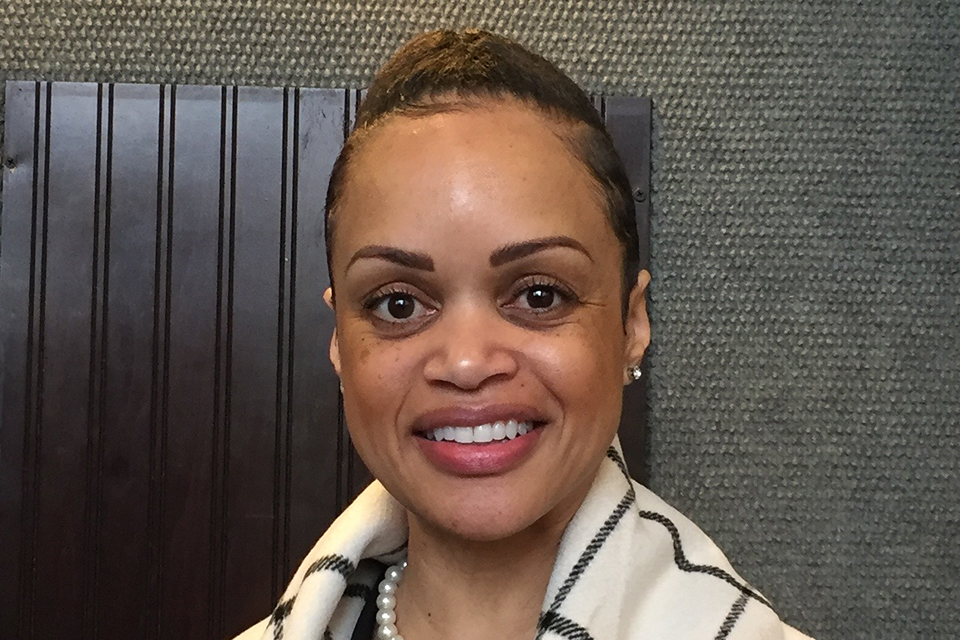 At this week’s Martin Luther King Breakfast, The Skanner News spoke with Portland Chief of Police Danielle Outlaw about her work, her vision and issues impacting the bureau.

The Skanner News: How is officer recruitment going, and what are you looking for in your police recruits?

Portland Police Chief Danielle Outlaw: We are looking for the nontraditional officer. Historically, we would do a lot of recruiting directly from the military, which we still do. But the nature of policing has changed so much that we are looking for those maybe with liberal arts backgrounds. We want creative problem solvers with fresh ideas, that represent not only the diversity of our community but the diversity in this country and internationally. Because they bring new ways of doing things than how we address our issues currently.

TSN: Do you support the creation of a non-police response to people in mental health crisis?

CO: I most certainly do. I said it as soon as I got here: Every call to which we’re dispatched goes to does not necessarily require a police officer. The problem is that we don’t always know what we have until we get there. So there might be a time when someone is in crisis, but there might be an escalated level of threat that does require our care.

Now with that said, I do believe that there are many of those who are in crisis that don’t need police services. They need to either speak with a clinician or they need other social services provided.

We just started a pilot program in early November by placing a police sergeant in the communications dispatch center at BOEC (Bureau of Emergency Communications). That sergeant is placed there to help triage some of the calls that we receive, to not only make sure that police officers are only being sent to calls were a police officer needs to go -- but if a call goes into BOEC and it is determined that this does not need to be responded to by a police officer, that sergeant has the authority to say “No, this needs to be reserved to another agency or social service provider.”

So the answer to that is: It depends. We are researching a lot of options. Where I came from, before I moved up here, we had clinicians that worked for the county that were actually dispatched to the calls, and then if they determined that they needed a police officer there, then we came after that. So there are other ways to ensure that we are not always the first responders to those who need services outside of police response.

TSN: Many people are concerned about the increase in White supremacist street actions in Portland. Does the Portland Police Bureau have a plan on that? Or is it something that you’re discussing behind the scenes?

CO: This is something that concerns everyone. But again, I want to say, I want to remind people what our roles are. Our roles are not only to be strong partners with our local law-enforcement agencies and state agencies but also federal agencies. We rely very heavily on information that we receive, for example, from federal agencies, if there are heightened threats that we need to pay attention to.

With all of that said, there are still laws that we enforce. I think it’s important for us to educate the community on the differences between hate crimes and hate speech, and I think it’s important for people to know what our roles are in protecting everyone’s right. Regardless of how egregious or hateful some person‘s speech might be, we have to focus on behavior. It’s a very slippery slope when there’s an expectation of our police officers to protect -- literally protect -- the speech of others, but not everyone’s.

So I really want to reiterate the fact that we provide services to everyone, and we don’t pick or choose sides. But at the same time when it comes to increased threats or behavior or harm to individuals or property, absolutely we are concerned about that.

TSN: Are there what are the main reforms that you would care to make in Portland? What is your main vision for what you would like to see differently here?

CO: There are a lot of things that we do really well here, but there are a lot of things we need to improve. Obviously, in the bureau, there’s a huge trust factor. There’s a widening chasm of trust between the public and the police bureau and that’s just based on the history of what’s going on in the city and the state in general, and the role we represent as law-enforcement officers.

The only way I think to do that is through stability and presence, and relationship building -- and our actions, obviously. I’ve been here for a little over 14 months, maybe 15 months, and it’s been quite busy. And there’s been something major happening almost all the time and the feeling could be that at times were taking 20 steps forward, and then we take 10 steps back.

But I think it’s important for us to be transparent in how we respond to the critical incidents or the things that are happening in the community. And it’s important for me as the police chief to manage expectations and, again, let people know what our role is here in this community.

So again, trust building is huge. We’re obviously under a settlement agreement. We’ve achieved a lot of compliance, actually. We’ve gained a lot of compliance in the short time that I’ve been here. We’re focusing on effective crime strategies and how we deploy our resources. But ultimately, it’s about making sure that we really reach out, we maintain and we establish trust with our communities.

So there’s a lot going on out in the country. I spend a lot of time speaking with my colleagues, benchmarking against other police departments to make sure that we’re not reinventing the wheel -- utilizing case studies, and also learning from our past and our own mistakes and also learning from what we really do well and sharing that nationally and internationally.

So yes -- the answer is yes, there’s a lot of good work going on out there. You just have to pick and choose. And we have to tailor any strategy we implement according to the culture here in Portland. Portland is very, very unique and you cannot pick up something that works somewhere else and think we can just plop it here in Portland and it will work in the same way.

TSN: Do you have any legislative priorities or anything that you hope will happen in the legislature?

CO: That’s a question for the mayor’s office. I’ll leave the politics to the politicians.

TSN: As an African American woman working in the Police Bureau, you must be facing obstacles, such as institutional racism. Is there any kind of solution that you have that you employ as a woman of color in this institution that helps you maintain empowered or that you would recommend to anybody else?

So I find that when I call people out on it, when I recognize it happening I speak to it. And it might not be in a very confrontational way, but I do what I can to educate but also to let people know, one, I recognize that this is what’s happening, I’ve acknowledged your biases, I expect you to check them and here’s what we need to do to work through that -- because otherwise we’re not moving towards the same goals.

TSN: That’s like something I heard Angela Davis say once – when you encounter racism, mark it, call it out.

And that comes with time, obviously, and we are in power in numbers. I really appreciate even having a question asked, because it gives me the opportunity to speak about it more, as opposed to it being the elephant in the room that no one is ever addressed

TSN: What’s your take on the difference between where you’re from -- Oakland, Calif., -- and Portland? Do you feel a little bit of culture shock or anything like that?

CO: You know, in the Bay Area we are very direct, what you see is what you get. And we say what needs to be said and then we moved on. No love lost. It’s a little bit different here. That doesn’t mean that I’m not open to learning new ways of being. I’m still going to remain true and authentic to who I am.

It’s just like every relationship that needs to be built when there’s a community and institution organization you have to get the time to know each other -- first learn to recognize cues, and so on and so forth. Yes, it’s different, but it’s not necessarily a shock.

CO: I originally said when I got here -- and I still hold true to this -- if nothing else hopefully I bring people to the table that otherwise would not have. Today is symbolic not only because it’s Martin Luther King‘s 90th birthday, but he really emphasized unity in community. He emphasized recognizing differences, but he also recognized that in order to get there and achieve equality of opportunity, that we had to do it together, regardless of our background or our beliefs, that we could dissent but we could do it creatively, we could do it respectfully, we can do it peacefully -- and that’s what’s important here.

So from day one when people criticize me or they criticize the actions of the bureau, those are the first people I wanna speak to. Now, they don’t always wanna speak to me, but I think it’s important, because everyone brings a different place or a moment of truth to the table, and how do I know these things if I don’t get a chance to hear directly from them what their perspectives are?

So I don’t take it personally if they say things against us or our actions, but I want to sit down and engage our critics. That’s important. That’s the only way we get to where we need to be and that’s what I will continue to do while I’m here.

TSN: Is there a question that you wish people ask would ask you but they don’t?

But you don’t hear it publicly. Why is that? I would love to hear and have that same level of vocal support, whether it’s at council meetings or the folks that are interviewed on the news -- I don’t know how to phrase that into a question.

But my officers hear what is not liked about them more prominently – how do we bring that to the forefront? That the very people who literally drive past me and they stop their car to say -- we support you, we support you, thank you for everything you do – how do the officers hear that? How do I put that in a bottle and go to their roll calls and show them that this is the score that they get?

Because it could be a lot to hear day in and day out what they’re not doing well or what is perceive not to be done well – there’s no balance of what’s being done right.

I had someone came up to me yesterday and wanted to share with me how an officer responded and handled her call, and was very caring -- very empathetic, very respectful, very professional -- and the officers need to hear that. So I guess my question Is how do we get that positive feedback at the forefront in the same way we get the negative feedback?