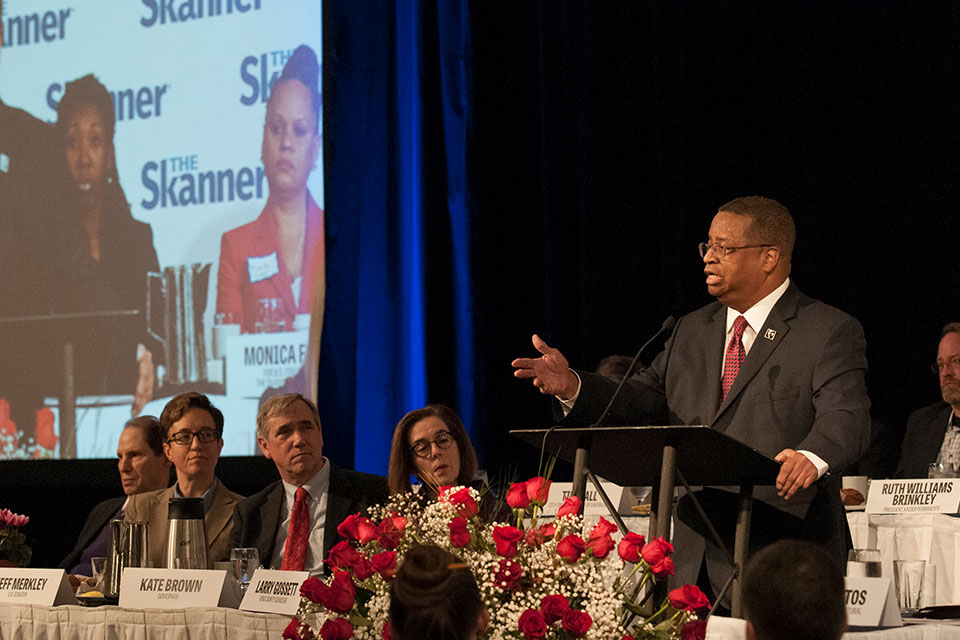 Rather than legal, separate-but-equal facilities, in every neighborhood in Seattle houses were sold with restrictive covenants in their deeds, saying they could not be sold to a person of color.

“We were a highly segregated community,” Gossett told the crowd of about 1,000 individuals who gathered at the Red Lion Hotel on the River on Hayden Island for the event, where 29 students were honored with scholarships from The Skanner Foundation.

Gossett, who co-founded the Black Student Union at the University of Washington and later helped organize Black Student Unions at high schools and middle schools around the Seattle area, was instrumental in changing the logo of King County to honor Martin Luther King. Originally, the county was named for William R. King, a 19th-century politician and diplomat who represented North Carolina and Alabama in Congress and served as the 13th vice president of the U.S. for six weeks before his death.

William King was also a member of one of the largest slaveholding families in Alabama, owning as many as 500 slaves at one point. Neither the county logo – an imperial crown – nor William King’s history seemed like an appropriate legacy, Gossett said, so he pushed for a change that would better reflect the area’s values.

Gossett stressed the “deeper meaning” of King’s life and vision. The most popular King quotes and remembrances focus on the idea of people of different races getting along – multiracial groups of children holding hands.

“For some reason, many, many Whites in our country believe that is the essence of King’s dream,” Gossett said.

But King’s concerns were not just interpersonal. They were structural. Segregated public facilities reinforced the notion of African Americans’ inferiority and they were the law of the land.

Gossett said he’s also pushed back against the idea that young people shouldn’t take risks with direct action. Historical evidence – notably, the Birmingham Children’s Crusade of 1963, during which thousands of children walked out of school and were arrested – suggests otherwise, he said.

“It is said by most historians that it is not likely that the back of segregation would have been broken in Birmingham if not for thousands of children, ages seven to 17,” Gossett said. More than 3,000 were put in jail or incarcerated in other public facilities, but they kept chanting King’s mantra of love.

Gossett said if King were alive today he would say, “I want to build bridges, not walls.”

He also said many of the goals of King’s Poor People’s Campaign, including a jobs guarantee, and that King would likely support nationalized health care.

In earlier speeches, elected officials stressed the importance of keeping King’s dream alive, particularly in the form of improved voting access. Governor Kate Brown noted that since Oregon’s landmark Motor Voter law took effect in 2016, voter turnout among people of color has increased by 9 percent. The bill registers individuals to vote once they’ve made contact with the Oregon Department of Motor Vehicles to get a driver’s license or identification card with an Oregon license. Brown wants to expand the law to ensure access via more government agencies, and to include postage paid ballots.

Oregon Senator Ron Wyden, like Brown, decried the rise in voting restrictions in other states, and along with his colleague in the Senate, Jeff Merkley, called for an end to the partial shutdown of the federal government.

Merkley, who in recent months has hinted at a presidential run in 2020, said that if Martin Luther King were alive in 2019, he would tell Donald Trump, “You have held 800,000 Americans hostage to build a racist wall.” Alluding to an MLK quote about changing the Jericho Road – rather than merely being Good Samaritans, King said, “we must come to see that the whole Jericho road must be transformed so that men and women will not be constantly beaten and robbed as they make their journey on life's highway” – Merkley said it was time to change the Jericho Road, end the shutdown and stop incarcerating children at the border.

View photos from the Breakfast here.