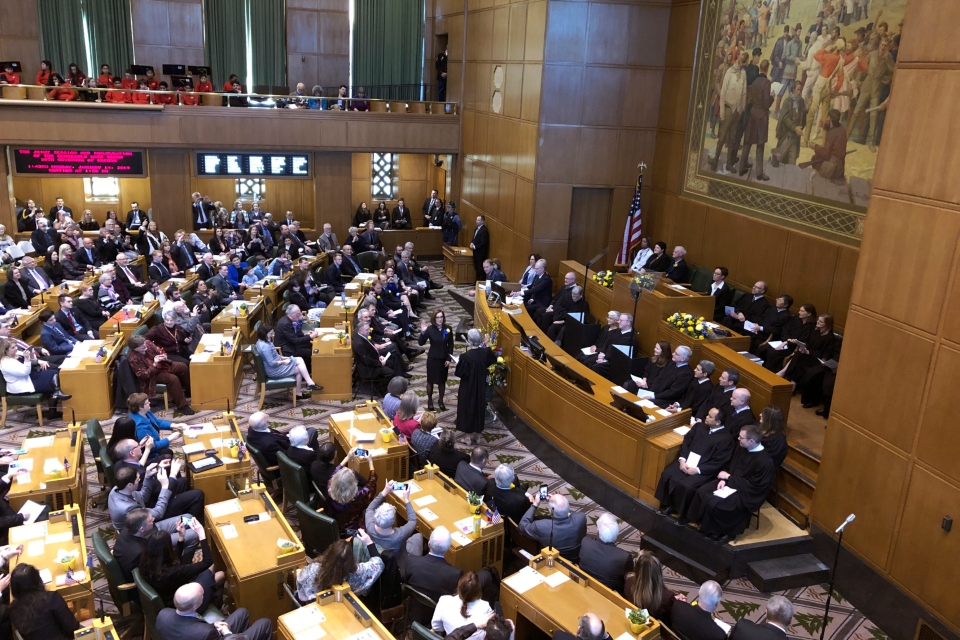 Speaking in the House of Representatives after she was sworn in, Brown said Oregon's unemployment rate is the lowest on record and has one of the fastest job growth rates in the country.

"With growth comes a lot of really good things. More jobs. More ideas. And hopefully, more opportunities," the Democrat said. "At the same time, not everyone is experiencing this prosperity."

Homelessness and spiraling rents must be tackled, Brown said, noting her proposed budget makes a historic $400 million investment in housing. She also said a bill sponsored by House Speaker Tina Kotek and Senate Majority Leader Ginny Burdick, both Portland Democrats, is "innovative" and will give renters some peace of mind.

The bill prohibits landlord from terminating month-to-month tenancy without cause after 12 months of occupancy, allows a landlord to terminate tenancy with 90 days' written notice and payment of one month's rent under certain conditions, and limits annual rent increase to 7 percent above annual changes in the consumer price index.

House Republicans said they are "poised to resist harmful legislation, vigorously safeguard Oregonians' tax dollars, and protect their rights" during the 80th Oregon Legislative Assembly, which starts next week.

Democrats control the Legislature, with a three-fifths super majority in the House and Senate, giving them greater power to impose taxes.

In her address Brown also repeated her intent to end what she called the "wild, wild west" of campaign finance.

She was re-elected in November after the most expensive gubernatorial race in Oregon history. In the run-up to the finish, her campaign committee had received almost $10.3 million in cash contributions while Republican candidate Knute Buehler's received $13.2 million.

"No one should be able to buy a megaphone so loud that it drowns out all the other voices," Brown said.

At one point, a couple of people opposed to a proposed deep-water marine terminal on the Oregon coast where ships could load liquefied natural gas from a planned pipeline interrupted Brown's speech to shout a few words before departing.

At another point, Brown thanked state employees and volunteers, including "first gentleman" Dan Little, who are working to keep federal facilities accessible during the partial federal government shutdown. Brown tweeted photos on Saturday of her husband, Little, after he cleaned toilets at Mt. Hood National Forest. Little sent the $28 bill for disposing of the trash to President Donald Trump.

Brown's $23.6 billion budget proposal for the next biennium aims to stabilize funding for the Oregon Health Plan, a free health coverage offered by the state for people who meet income and other requirements.

"Health care is a fundamental right," she declared.

Last year, a bill that would have asked Oregon voters asking if they want to enshrine health care as a right in the state Constitution died in a Senate committee.

"Let's work together to make sure every Oregonian has the health care they need," Brown said.

Noting that Oregon is experiencing drought and that last year was the warmest year in Oregon since 1895, with wildfires increasing, she said Oregon must reduce harmful emissions that contribute to global warming while building a clean energy economy.

After years of underinvestment in education, Oregon will need additional funding to bring its schools back to a strong level, she said.

Brown has added a $2 billion education investment package that's in addition to her base budget. Property tax limitations adopted in the early 1990s have resulted in decreased funding per student. The governor said in November when she presented her budget proposal that she expects the Legislature to reform Oregon's revenue system to adequately fund education.

"Our education system is in desperate need of repair, reform, and reinvestment," she said Monday. She pledged to work with lawmakers, the business community and others to properly fund public schools.