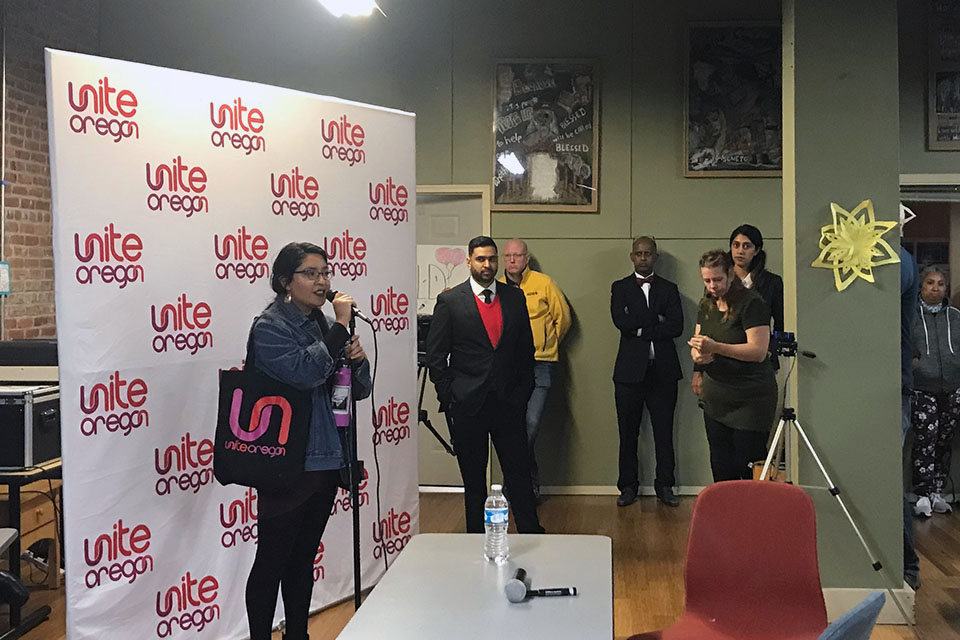 The state attorney general’s office is planning to introduce a bill in the upcoming legislative session that would strengthen the Oregon’s hate crime laws.

Citing reports from the Southern Poverty Law Center on hate-motivated incidents in the aftermath of Donald Trump’s election showing Oregon had more incidents than anywhere else, attorney general Ellen Rosenblum said the available data all point to a growing problem that’s especially bad in Oregon. FBI statistics show a 40 percent increase in hate crimes between 2016 and 2017.

“Oregon has consistently exceeded the national average,” Rosenblum said Monday at the first of a series of listening sessions held around the state this week.

But – for a variety of reasons – numbers don’t tell the whole story, she added.

“Despite the numbers I just shared, we know hate is more complex than the numbers reflect,” Rosenblum said. She noted that many hate crimes go unreported due to distrust between vulnerable communities and the police. Some incidents that are reported are not investigated or categorized as hate crimes.

According to Aaron Knott, Rosenblum’s legislative director and the chair of a state task force on hate crimes, the attorney general’s office is still taking feedback from the public before releasing draft legislation.  It would add services for victims, force prosecutors to focus on the content of a crime rather than perceived intent and improve data collection, which has been spotty in the 30 years since Oregon’s first intimidation laws were introduced.

“In my stay in the US I have never seen as much hatred and racism as Oregon,” said Samuel Van Dyke, a wildland firefighter and film writer and actor who relocated to Portland recently after living in Corvallis, to members of Rosenblum’s hate crime task force at Unite Oregon in Northeast Portland Monday. Roughly 100 people attended the event.

Originally from Swaziland, Van Dyke said he has also lived in Haiti and Columbus, Ohio. He described a recent incident walking in Sellwood with three other men – one Latino, two White – where a woman followed them to a park and accused them of having been in her backyard staring in her windows. She told them they had scared her, he said, making him wonder why – if she was so afraid – she was following them rather than calling for help.

Van Dyke also said a White friend was once pulled over and the officer approached the passenger side of the car – where Van Dyke was sitting – rather than approaching his friend in the driver’s seat.

Van Dyke was not alone in describing adverse interactions with police as well as with civilians. Several other individuals who spoke at the event talked about experiencing discrimination while shopping, including a Mexican American woman and her daughter who were accused of stealing and escorted out of a store where they had gone to pay a utility bill and Lisa Fay, a Muslim woman whose boss told her to remove her hijab, calling it a “doo-rag.”

In one of the final comments of the night, Sam Sachs, founder of the No Hate Zone, praised the attorney general’s office for convening the task force, but suggested they hold more listening sessions or engage in other forms of outreach. (Those wishing to report a hate crime to the DOJ can do so through its website. The Skanner has compiled an additional list of hate-crime reporting resources here.)

The task force also held listening sessions in Eugene and Medford this week.