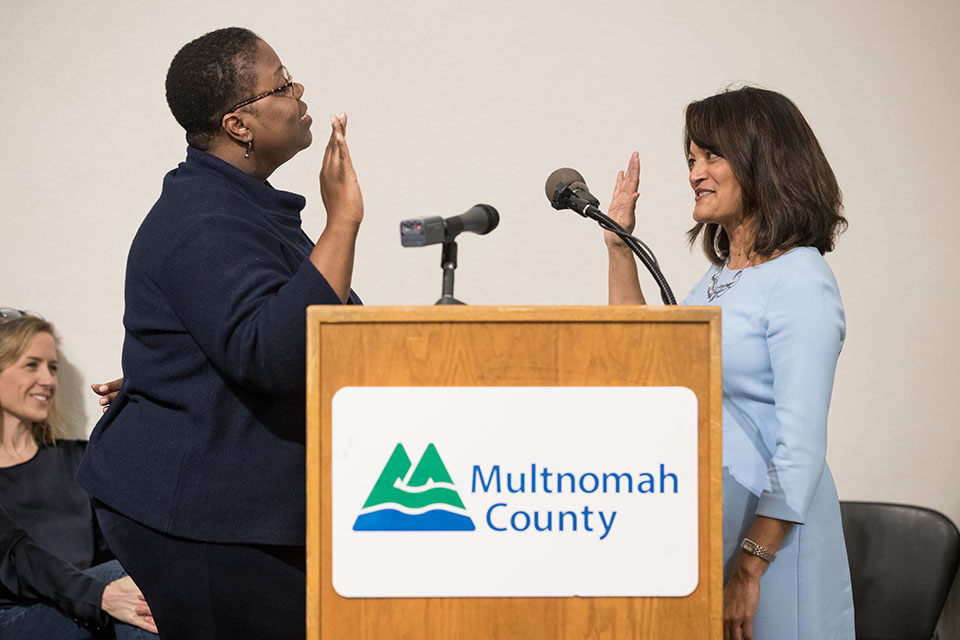 Susheela Jayapal pivoted from a legal career to the nonprofit sector nearly 20 years ago. Now she’s pivoted from nonprofits to politics.

Last week Jayapal was sworn in as Multnomah County’s Dist. 2 commissioner, becoming the first South Asian to hold county office in Oregon and the second to hold public office in the state. Born in India, Jayapal came to the United States at 16 to attend school at Swarthmore College in Pennsylvania. After graduating from law school at the University of Chicago, Jayapal moved to the West Coast to work at law firms in San Francisco and Portland, then went to work as legal counsel for Adidas.

Then her career took an unusual turn: she decided to go into the world of nonprofits and philanthropy. She worked with Planned Parenthood of the Columbia-Willamette, Portland Schools Foundation, All Hands Raised, Literary Arts, Metropolitan Family Service and the Regional Arts & Culture Council. She’s also served as a court appointed special advocate for children in foster care.

Jayapal’s sister, Pramila, represents Washington’s seventh district in the U.S. House of Representatives. But the newly sworn in Multnomah County Commissioner said running for office never crossed her mind until quite recently.

“I became increasingly concerned about what I saw in Multnomah County,” Jayapal told The Skanner.

Too many people were not finding a place in the county’s economy and being displaced – and they were disproportionately Black and brown. Jayapal’s district, which includes Northeast and East Portland, is the most diverse in the county.

“Part of my background is that I see myself in those folks in some ways,” Jayapal said.

Jayapal told The Skanner she got interested in serving the county in particular because of the mix of social services the county provides – which tie in with her background in the nonprofit sector.

“People often don’t have a clear sense of what the county does,” Jayapal said. From health services to bridges to pet services, she said, “the purpose of all of those programs is to give people what they need to thrive in this community.”

“Homelessness was the number-one issue that people brought up in the eight months I was campaigning,” Jayapal told The Skanner. “I heard about homelessness and I heard about mental health.”

Most didn’t propose specific solutions, though a few mentioned the idea of using the never-used Wapato jail as a homeless shelter. Jayapal opposes the plan, setting her apart from her predecessor Loretta Smith, who ran an unsuccessful bid for city council last year as her county commission term came to an end. (As of November, Wapato was marked for demolition.) But for the most part, she said, people just urged her to do something to address the problem.

“If we don’t have some visible change, we’re going to drive more and more solutions that aren’t good solutions, like a Wapato,” Jayapal said.

Jayapal supports solutions to help keep people in housing they already have, including vouchers and long-term rent assistance for vulnerable renters including seniors.

She also intends to prioritize job training programs and workforce development, and to ensure diverse staffing for county projects.

Jayapal’s parents live in India and she tries to get home to visit them once a year. She has two grown children, ages 23 and 26, who are graduates of Grant High School. When she’s not at work,  she reads, plays the piano, hikes, and is “sort of a fierce tennis player.”

“I try to force myself to do yoga because I hear it’s good for you,” she said, laughing.