A World of Construction Beckons 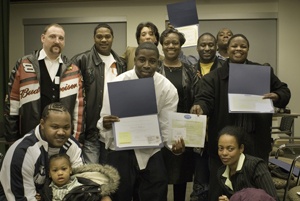 Climbing all the stairs on a half-built building is the most difficult part of Dashia Fontleroy's job. The carpenter's apprentice isn't bothered by the math, or cutting wood with high-powered saws, or working in a male-dominated field. She does hate lugging a 60-pound tool belt to the job site. Working outside has even become somewhat welcoming.
"The first winter was difficult," she said. "But now I'm used to it."
Fontleroy is a fairly recent graduate of the Portland Housing Authority's ETAP program or Evening Trade Apprenticeship Preparation. The program celebrated the graduation of 32 students on Thursday night – students who spent the last 10 weeks preparing for a number of careers in the construction trades.
ETAP, like many other pre-apprenticeship programs provided to low-income individuals, provides a base of education for a formal apprenticeship. The program's director, Deborah Williams, says the program is paving the way for the "new construction industry."
"We're changing the face of the traditional construction industry," she says. "And building a reputation that is changing the mindset of organizations and companies."
The construction industry isn't always known for its inclusiveness. And Williams wants to help change that and add more minority and female faces to construction sites. While she hesitates to say the industry was racist, she definitely sees an industry that is different than in decades past.
"You have a new breed of people out there who are trying to do better," she said.
Recruitment is also changing. Demand for workers is more than an inclusive, family-business oriented training system can handle. ETAP graduates are given help finding and retaining jobs. Program representatives establish face-to-face relationships with construction company foreman to make sure graduates are meeting expectations.
Ronnie Crawford is one of those who knows the old system and is using that to help find jobs for the graduates. A son of a union carpenter, Crawford followed the same career path for 44 years. He says if a relative hadn't told him how to join a union apprenticeship, he would've picked a different career. Getting the knowledge about construction-related careers to a workforce not accustomed to the trades is important for Crawford.
"You can take those skills anywhere in the world and apply them," he said.
He says a having a skill in the construction trades provides a more solid foundation than other industrial work. Before joining ETAP, Crawford deviated from a life in carpentry with a position at Freightliner. He was laid off, but unlike many of his co-workers, had a skill to fall back on – even if that skill is used in a much different way today.
Crawford is now a retention specialist for ETAP and works with company owners to ensure the program's graduates are the right fit for the job. By building relationships with contractors and workers, he says he's better able to discover problems with in the worker/foreman relationship before someone gets fired.
Jerry Crain Jr. is one graduate who hopes to find a steady career in carpentry after years of dead end jobs.
"This is an opportunity to get a career," he said.
Matthew Thierry, who graduated last year from the program, is well on his way to his dream job. Thierry wants to be a lineman for PGE. Not exactly a 9 to 5, linemen go from job to job, site to site to fix and install power lines and equipment. Thierry is currently a groundman for PGE and has been working overtime to help with storm damage repair.
The program is also doing its part to assist recent immigrants transition into the country. Part of the graduating class was made up of a Vocational English as a Second Language Program, in partnership with the Hispanic Chamber of Commerce. One graduate, Indalacio Aguilar, who moved to the United States 20 years ago from Mexico, plans on getting into the sheet metal trade. That industry, he says, offers a wide variety of opportunities that his previous profession did not.
Giving graduates options is key for success, says Williams. Whether its carpentry or plumbing, union or open shop, its all about what works best for the student.
"My concern is that I want them to have the best fit," says Williams.
While most graduates end up going into carpentry – training is held at the Willamette Carpenters Training Center – others fill a variety of other trade areas. And while many program participants are living in public housing, it's no longer a requirement to take part in the program. A majority served by ETAP are African American (55 percent) and more than 30 percent of graduates are female.
This line of work isn't for everyone, says Williams. Many times, you have to be ready for long days of physical work, and much of it is outside. But  the 32 smiling faces at Thursday's graduation, are all  thinking about a brighter future.
The next classes start on Feb. 23, 2008. Please call 503-943-5664 for more information.