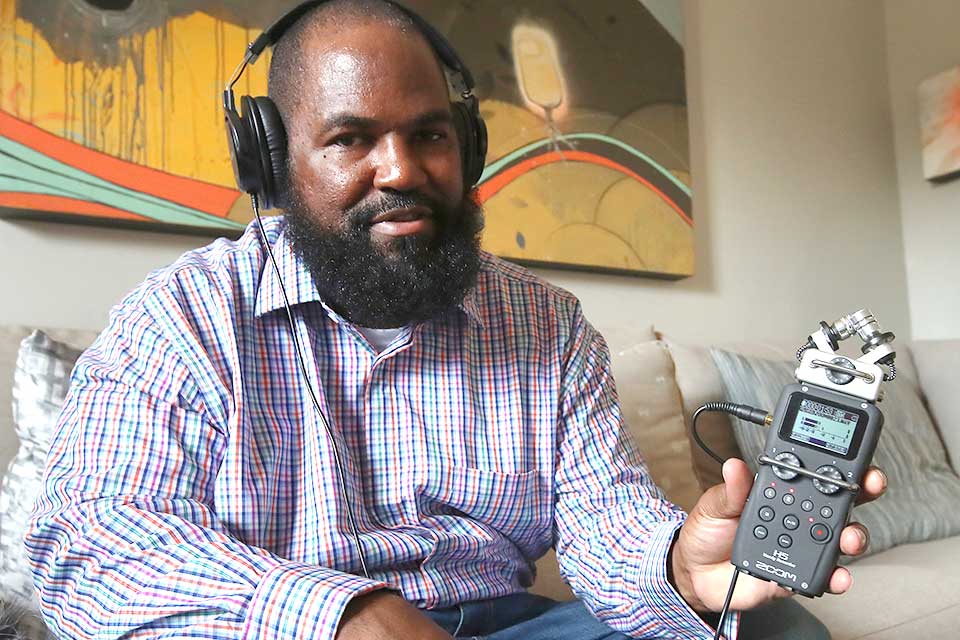 OAKLAND, Calif. — In California, inmates typically are granted parole by doing good deeds or showing they have been rehabilitated by becoming pastors, drug counselors or youth advocates. For Walter "Earlonne" Woods, the path to freedom was podcasting.

Woods, 47, was recently released from San Quentin State Prison after California Gov. Jerry Brown commuted his 31-years-to-life sentence for attempted armed robbery. Brown cited Woods' leadership in helping other inmates and his work at "Ear Hustle," a podcast he co-hosts and co-produces that documents everyday life inside the prison.

Woods has since been hired as a full-time producer for the often funny and at times heart-wrenching podcast, which has been a smashing success since its launch in 2017. The show's roughly 30 episodes have been downloaded 20 million times by fans all over the world.

Listeners have praised "Ear Hustle" online as "eye-opening" and "incredibly humanizing." But for Woods, one of the most meaningful reviews came from the governor's office when they called with the good news.

"The one thing that the lady said, you know, she told me, 'We love the podcast in this office,' " Woods told The Associated Press of the commutation call from Brown's office. "I don't know if the governor listens, but people in his office listen. People really like what we do."

A Peek into the Hardships and Small Joys of Prisonlife

During their podcast, Woods and fellow creator and outside co-host, prison volunteer Nigel Poor, give listeners a peek into the hardships and small joys of men incarcerated at the medium-security facility.

In interviews with the hosts, inmates discuss struggles such as finding a compatible cellmate to share a 5- by 10-foot (1.5- by 3-meter) cell, share why they take care of frogs or black widow spiders as if they were pets, or describe the impact of solitary confinement or being on death row.

Woods, an affable man with a quick smile and a sharp sense of humor, helps listeners understand prison life, while Poor brings an outsider's perspective, asking insightful questions that at times push inmates to reflect on what put them behind bars.

The podcast offers listeners an intimate look into lives society doesn't spend much time thinking about, said Woods, who spent 21 years behind bars.

"We've been able to really humanize people, and people realize that those in prison are just people who made dumb decisions."

Brown agreed, and in his commutation letter, issued the day before Thanksgiving, the governor said Woods "has clearly shown that he is no longer the man he was when he committed this crime."

"He has set a positive example for his peers and, through his podcast, has shared meaningful stories from those inside prison," Brown wrote.

It Began With a Contest

The podcast project started after Poor, a San Francisco Bay Area artist who has volunteered at San Quentin since 2011, approached Woods.

In 2016, Poor saw Public Radio Exchange's Radiotopia network was sponsoring a podcast talent contest, and she asked Lt. Sam Robinson, San Quentin's spokesman, for permission to enter. Another co-creator, Antwan Williams, who is serving 15 years for armed robbery, came on board to do its sound design.

Their pitch beat more than 1,500 contestants from 53 countries, and they received the backing of a group of radio professionals, Poor said.

"Everyone was shocked when we won, especially the prison. Lt. Robinson told me he let us enter because he never thought we would win," she said, laughing.

"Ear Hustle," — eavesdropping, in prison slang — has found international success, with fans sending cards and letters from as far as New Zealand, Qatar in the Middle East, and Mauritius in East Africa. The free show also can be accessed in prisons throughout California and the United Kingdom. New episodes are posted every couple of weeks.

Julie Shapiro, Radiotopia executive producer, describes the podcast as a "roller coaster of emotions" that challenges what people understand about life in prison.

"People don't expect to have something in common with those telling their stories from prison, but the details of their lives resonate with listeners because they hear these men encounter daily life in some of the same ways that we do," Shapiro said.

The outpouring of love and appreciation for the show has grown since Woods announced on a Nov. 24 episode that Brown commuted his sentence.

The first thing Woods did after walking through the prison gates on Nov. 30 was take in the view of the San Francisco Bay and of the ocean "as far as the eye can see." An episode featured his first moments as a free man.

Since then, he's been noticing new styles, like women everywhere in yoga pants, and people walking through the streets with their heads bowed. He quickly realized they were looking at their smartphones, which didn't exist when he started his sentence in 1997.

Woods has also spent time people-watching at a high-end department store, visited Disneyland and recently made eggs for the first time in two decades.

The fourth season of "Ear Hustle," which will be released this summer, will feature stories of his re-entry to society and interviews with other inmates released after long sentences. He and Poor also plan to visit maximum-security prisons and tell the stories of prisoners there.

"There's a lot of people that's in there that should be out," Woods said. "I created a podcast, but I'm not the exception."