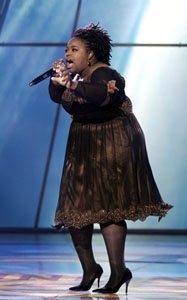 It's official. Crystal Aikin is the best of the best in amateur gospel singing, according to Black Entertainment Television.
The 33-year-old from Tacoma, Wash., sung her way into first place in BET's Sunday's Best Gospel competition. Her dynamic voice earned her the keys to a 2008 Toyota Camry and a  national recording contract with Zomba Records.
And that's before we get to the $300,000 in prize money.
Aikin shed a few tears when her win was announced but said she felt enormous gratitude. Of all of the national and local singing competitions she participated in, this is the first competition she's actually won.
"The word of appreciation goes to God because it's been a long journey. Not for just Sunday's best, but life," Aikin said. "He made me first on a national television show. It's amazing. With Mary Mary, Kirk Franklin and Yolanda Adams on stage…so when he does things, He does them big."
In defeat, rival Shari Addison showed class and sincere graciousness. The two women even joined the stage together to sing Mary Mary's hit gospel tune, Yesterday. Addison said she feels just as much a winner as Aikin is.
Addison lost her job earlier this year, but said she is expecting bigger and greater things to come her way as a result of singing note after incredible note alongside Aikin.
"I am a winner, because I trust God with me," Addison said. "Whatever he has for me-it's greater than the confines of Sunday's Best. He used this medium by which I should be seen where he needs me; positioned to be where he wanted me to be. That's the thing that God chose to use to catapult (me). I feel like I beat all the odds."
Beth Payne, a backstage correspondent on the show, said kudos should go to both women.
"This is the best thing to happen to BET. You've never seen anything thing like this— where people talk about God, sing about God and being showcased like this. It's such an awesome opportunity. That's because of people like Crystal Aikin and Shari Addison. These are phenomenal women. They're very different. They're very unique. They are very anointed. And they're going to do great things."
Several years ago, Aikin said she had lost the desire to sing altogether. But somehow, after talking to a caring stranger, Aikin found herself standing in line with the other contestants. Today, the registered nurse is glad she didn't give up her dream.
"I lost my passion to sing," Aikin said. "I had lost my desire to sing. I didn't feel like I really had anything to say, and that I wasn't really worthy. I felt I wasn't even worthy to even get on a microphone. I felt like I was at the Grand Canyon, stepping on the edge of a cliff … I was hoping to take that leap of faith and know that God would carry me."