Seahawks Seal Postseason Return with Win Over the Chiefs 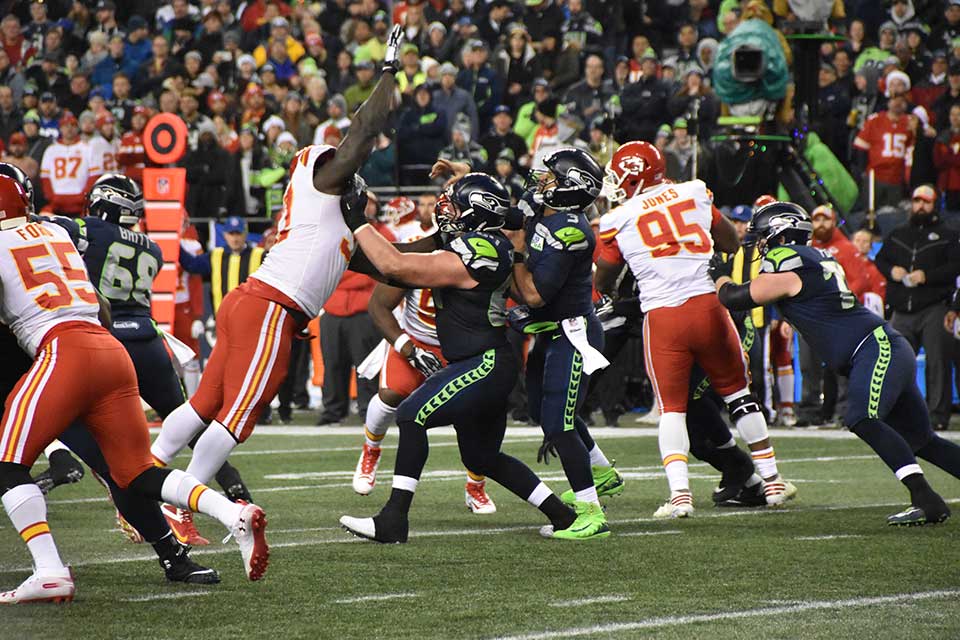 The Seattle Seahawks are now 9-6 and will head into the postseason after clinching an NFC wild-card berth with a 38-31 hard fought win over the Kansas City Chiefs (11-4) Sunday night on national television at CenturyLink Field. After missing the playoffs last year, the Seahawks have made the playoffs in seven of nine seasons under coach Pete Carroll and six of seven with Russell Wilson at quarterback.

“There weren’t many people that thought we could do this,” Carroll said after the win. “This is a really gratifying, a big accomplishment, a special accomplishment. It’s a magnificent feeling that we can go play anybody anywhere.”

The anticipated quarterback dual between Seahawks Wilson and Chiefs quarterback Patrick Mahomes panned out as both quarterbacks finished the game with three touchdowns each. Wilson completed 18 of 29 for 271 yards and Mahomes was 23 of 40 for 273 yards including a 2-yard touchdown pass to tight end Ed Dickson with 7:31 left for his third touchdown proving that the Seahawks weren’t gonna back down especially in their home stadium in front of a national televised game with the roar of the 12s behind them on a cold night in Seattle.

Coach Pete Carroll. The Seattle Seahawks won (11-4) against the Kansas City Chiefs on Sunday, Dec. 23, 2018. Photo by The Skanner.

United States National Guard at the opening ceremony. The Seattle Seahawks won (11-4) against the Kansas City Chiefs on Sunday, Dec. 23, 2018. Photo by The Skanner.

Players take a knee in prayer before the game. The Seattle Seahawks won (11-4) against the Kansas City Chiefs on Sunday, Dec. 23, 2018. Photo by The Skanner.

“We’ve been to to the playoffs before but this year was special, everyone was counting us out early on and we had no fear, I think there a lot more we want to do. We have great leaders,” Wilson said. “We’re not stopping here, we have a big game next week even. We look at it that way and then fortunately we have the playoffs.”

The Seahawks defense dug in and forced the Chiefs to punt after just three plays and limited Mahomes to just 82 passing yards in the first half while the offense clicked with wide receiver Doug Baldwin finishing seven catches for 126 yards and a spectacular one-handed 27-yard touchdown catch in the third quarter.

“When it’s our time to make plays and were given opportunities to make plays, we are going to make them. We have shown that.” Baldwin said.

The Seahawks pass rush disrupted the Chiefs passing attack sacking Mahomes just once but he was hit 11 times during the game and kept the Chiefs receivers at bay.

“Doug to come back after being hurt, just valor,” Carroll said.

“Most everybody thought we didn’t have a chance and to hang together, hang through it, we got it done before the season is even over.”

Leading 31-28 in the fourth quarter, Wilson connected on a 45-yard pass to Tyler Lockett down to the 1-yard line which set up running back Chris Carson to score on the next play.

“I think we’ve already had confidence and every team we’ve played, we just build off that confidence. “Playing the Chargers and playing the Rams, that took our confidence to a whole ‘ other level. We knew we should have won those games.” Lockett said.

Carson finished the game with a pair of touchdown runs including 116 rushing yards on 27 carries, his fifth 100-yard game this season which brings his season total to 1,029; the first time a Seahawk has rushed for over 1000 yards since Marshawn Lynch in the 2014 season.

The Seahawks can wrap up the No. 5 seed and a matchup with Dallas by beating the Arizona Cardinals Sunday afternoon at CenturyLink Field to close out the regular season.