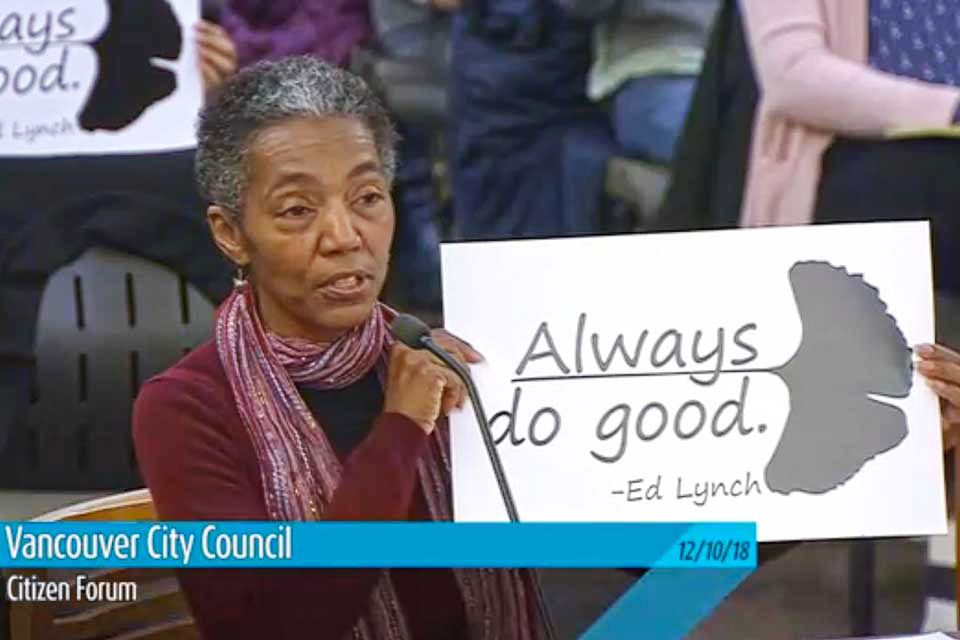 Ed and Dollie Lynch are remembered as titans of philanthropy in Clark County, Washington. At a Vancouver City Council meeting this week, former Vancouver Mayor Royce Pollard said the couple had given more than $130 million to charitable causes in the area over the years.

That included the transfer of nine acres of land to the Community Foundation of Southwest Washington, which sold the land to the city in 2002 with the intention of developing it as a public park.

The fate of that land – and the secondary connotation of the Lynches’ surname – brought out more than a dozen members of the public to testify about what the park should be called.

Near the end of the meeting, city manager Eric Holmes said city officials had for years referred to the park simply as Lynch Park and that it’s a common practice in the city to refer to an undeveloped parcel of land simply by the last name of its donors.

The name Lynch Park then appeared on promotional materials for the Stronger Vancouver public investment initiative, sparking an outcry from activists asking the city to reconsider the name – as well as from longtime Vancouver residents saying the council should stick with its plan to honor the philanthropic family when the park is developed.

When we promised Ed and Dollie that the park would be named for them, Ed kind of teared up. He really did.”

“We have enough parks named after White people, frankly,” said Cecelia Towner, head of the Vancouver chapter of Black Lives Matter. After receiving a letter from a high school student who thought the park should be named after an African American woman, she suggested the city reach out to schools during Black History Month and ask children for the name of the Black woman who had most inspired them, in order to generate a short list of names to then put to the community to vote on.

Several individuals who testified suggested finding other ways to honor the Lynches while attaching a different name to the park itself.

“I am perfectly in favor of honoring this family. I think it is important that we honor their name in this park somehow – a bench with a placard, a statue, something that tells the complete story of who they are and how this piece of land came to be part of this community,” said Clark County English professor Christina Smith, who is African American and said she moved to Vancouver a few years ago from Portland. “But I think that the name that goes on record in Google Maps and in all of the literature should be something that is more inclusionary.”

In her testimony, Towner also expressed concern about correspondence that stated the policy of attaching the donor’s name to a park, saying that policy is not applicable since the land was donated to a foundation and purchased by the city, not donated directly to the city.

In an emailed statement from Holmes to activists obtained by The Skanner, and in his comments at the meeting, Holmes used the word “practice” to describe the city’s habit of attaching donors’ names as placeholders to refer to undeveloped parcels of land. He clarified at the meeting that it’s not codified anywhere. In fact city code lays out a process requiring community engagement, and Holmes said the city will reach beyond city council meetings to get constituents’ input.

Preliminary materials have already been changed to refer to the park at Ed and Dollie Lynch Park, and the Lynches’ surviving family members would prefer that be the name of the final property. Holmes also said the transaction documents relating to the land sale do not specify what the final park should be named, and Holmes said his office will have to review city records from the period to confirm claims that the city promised the Lynches the park would be named for them.

“We have, at least based on what I’ve heard so far, two truths,” Holmes said.

“One is the presence and stature of Ed and Dollie Lynch and the extraordinary – truly extraordinary – contributions that they have made to this community and their quiet and consistent generosity that has changed Vancouver and Clark County in ways that are almost innumerable  -- and that many of which those of us in this room will never fully appreciate. And the truth that our community is becoming more diverse and we’ve heard from different perspectives this evening that present a different viewpoint on the name and the word ‘lynch.’”

During her testimony Towner, along with several other activists who attended the meeting, held up a sign reading, “Always do good” – Ed Lynch’s last words.

Ed Lynch died in 2015 at the age of 94, Dollie died in 2010 at the age of 84. A Stanford-educated engineer, Ed Lynch retired in 1985 as president of Kiewit Pacific, a Vancouver-based subsidiary of a large construction contractor. The causes they funded include a therapy garden at PeaceHealth Medical Center that bears Dollie’s name, as well as the Boys and Girls Club and the I Have a Dream foundation.

“The Lynches were part of a generation of local residents who made fortunes in business, then spent their retirement spending their money for the betterment of the community,” said The Columbian’s obituary of Ed Lynch.