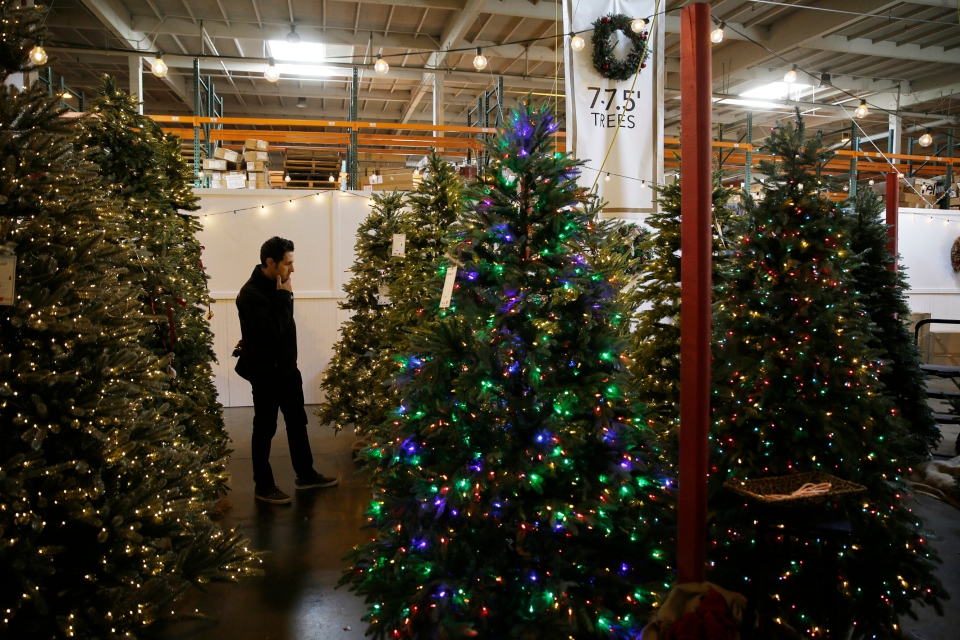 Rosa Villarreal's three young sons jumped and ran around the field of Christmas trees like jackrabbits, their excitement palpable as they raced from evergreen to evergreen. The boys, ages 2, 4 and 6, were picking out a real tree this year — a new tradition their young parents hope will create lasting memories.

"I saw this video where the big tree, the mom decorates it, and the little tree, the kids get to decorate it," she said, as her husband, Jason Jimenez, snapped a photo of their toddler posing with a tiny tree just his size.

Christmas tree farmers across the U.S. worry families like Villarreal's are slowly dwindling. Artificial trees, once crude imitations of an evergreen, are now so realistic that it's hard to tell they are fakes even though many are conveniently pre-strung with lights and can fold up for storage at the push of a button.

Between 75 and 80 percent of Americans who have a Christmas tree now have an artificial one, and the $1 billion market for fake trees is growing at about 4 percent a year — even though they can be reused again and again.

To combat this trend, Christmas tree farmers have joined forces as the Christmas Tree Promotion Board and are running a social media ad campaign this holiday season to tout the benefits of a real evergreen. The campaign, called "It's Christmas. Keep It Real!," is funded by a 15-cent fee that tree farmers pay for each tree they harvest.

It's a modern-day attempt at such famous agricultural ad campaigns as "Got Milk?" and "Beef. It's What's For Dinner."

A series of short movies on Instagram and Facebook follow real families as they hunt for the perfect tree, cut it down and decorate it. The target audience is the "millennial mom" because tree farmers are increasingly worried that young adults starting their own family traditions will opt for an artificial tree, costing farmers a generation of customers, said Marsha Gray, executive director of the Christmas Tree Promotion Board, based in Michigan.

She added that the videos show families cutting their own trees and buying pre-cut trees from lots.

"We realize they may have never done this before. And we need to help them discover it and figure out how to include it in their holiday."

It's impossible to know exactly how many real Christmas trees are sold each year because there is no central clearinghouse or agency collecting that information. But the National Christmas Tree Association estimates about 25 million evergreens are harvested each year — and presumably, most of those are sold.

Americans buy about 10 million artificial trees each year, said Thomas "Mac" Harman, CEO of Balsam Hill, the leading retailer of artificial Christmas trees. Harman is also the president of the American Christmas Tree Association, which does not disclose its membership but raised $70,000 in donations in 2016 for its work, which includes touting artificial trees.

"We're seeing a trend where consumers want to set their tree up over Thanksgiving weekend and leave it up all the way until after New Year's." That's safer with an artificial tree, Harman said.

Denise Shackleton got a real tree each season before switching to an artificial one. On a recent day, she was at an artificial tree outlet store in Burlingame, California, shopping for a new tree for herself and one for her daughter.

"No one got as excited about a real tree as me, but it was just too much work to put the real tree on my car, get it into the house — all of that," she said.

"It's totally for convenience."

Harman says Christmas tree farmers are overestimating the threat to their industry from artificial trees.

Many families now have both a real tree and an artificial tree, and small mom-and-pop tree farms that allow families to cut their own evergreen remain extremely popular, Harman said.

"I think it's the farms in the middle that are really seeing their business shrink because more people are either getting their tree from Home Depot — which is supporting the big farms — or they're going out to these small farms," he said. "I think a lot of the angst about 'artificial trees are taking over' is coming from these mid-sized farms."

To fourth-generation tree farmer Casey Grogan, that angst is as real as the towering noble and Nordmann firs he grows at Silver Bells Tree Farm in Silverton, Oregon. Oregon is the nation's No. 1 producer of Christmas trees, yet Grogan says he has watched about half the fellow tree farmers around him go out of business in the past decade.

A seedling takes eight to 10 years to grow to maturity, and it's difficult to predict demand years out, he said. He harvested about half as many trees this year as he did a decade ago, and with every new seedling he plants this season, he knows he's taking a gamble that the demand will still be there in 2028.

"We're an industry that would like to remain here and be around — and if everybody buys an artificial tree, we're not going to be here," said Grogan, who is also president of the Pacific Northwest Christmas Tree Association.

"It may be a little difficult, but not everything is easy," he added of buying a real tree. "It's worth the extra effort."