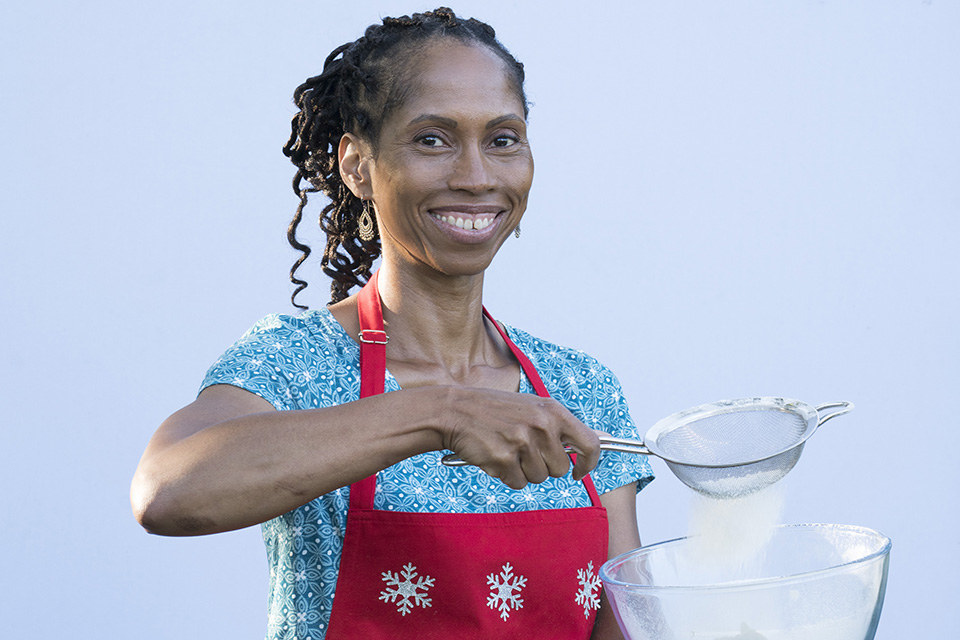 Cheryl Norris began learning to bake when she was six or seven years old, helping her mother make chocolate chip cookies in the kitchen. She moved on to cakes, pies and breads – and this winter she’ll be featured as one of the contestants on the fourth season of “The Great American Baking Show,” which premieres this week on ABC.

Norris, a Portland native, had previously applied to be part of the show, an American counterpart to the hugely popular “The Great British Bake Off.” She didn’t make the cut, but learned from the experience and applied again, this time being interviewed via Skype and then flying to an audition with a cake, a Danish pastry and a loaf of bread on the plane.

“I had this beautiful cake, walking through the airport. I was telling security, ‘Don’t tilt it!’” Norris said. At the audition, she and other hopefuls did more baking – this time in a commercial kitchen – and two weeks later, Norris learned she had the job.

Norris was on the road when she got the call: “I screamed so loud, they said, ‘We’re pretty sure you broke one of our ear drums.’ I had to pull over because I was so excited,” Norris said.

Norris, who works as a reliability engineer for Portland General Electric, took three weeks personal time off to fly to England to shoot the new season, which filmed in August.

“It was all fun. Days were long, but it was fun. I should say, most of it was fun,” Norris said, laughing.

Norris told The Skanner the experience made her a better baker, and despite the fact that contestants were her competitors, she had a sense of camaraderie with them and has remained friends since the show finished taping. They wouldn’t share baking secrets while competing directly, but would often give each other tips and hints after each phase of the competition was over.

The producers also didn’t do something reality-show producers are sometimes notorious for – intentionally creating or escalating interpersonal problems on set in order to create a more dramatic program. It’s that lack of ginned-up dramatic tension that fans and critics have reacted to when describing both “The Great American Baking Show” and its British counterpart.

Norris said she wants to encourage readers to seek out opportunities that may seem far-fetched or over-the-top to them – because one never knows what can happen.

“It was a once-in-a-lifetime opportunity,” she said of appearing on the show.

She’s been encouraging a friend she describes as “an amazing cook” to finish and submit an application to be on “Chopped,” something her friend has long considered but never followed up on.

When not in the kitchen, Norris is active in her church, Kingdom Nation, and volunteers with iUrbanTeen, a nonprofit that provides mentoring opportunities for teens underrepresented in STEM fields. She also loves to travel: in addition to traveling to England for the show, she was able to travel to Italy with her husband this year and is planning a trip to Japan next year. She also loves to read, and recently started a food blog, Bakes By Brown Sugar, with recipes including lemon bundt cake, apple cider donuts and chocolate chip cookies.

Baking is Norris’ primary culinary hobby, although she also enjoys cooking savory foods and is always trying to learn and improve.

“I’m always trying to get better, even if it’s something as simple as a steak,” Norris said.