How Oregon is Failing Black Students 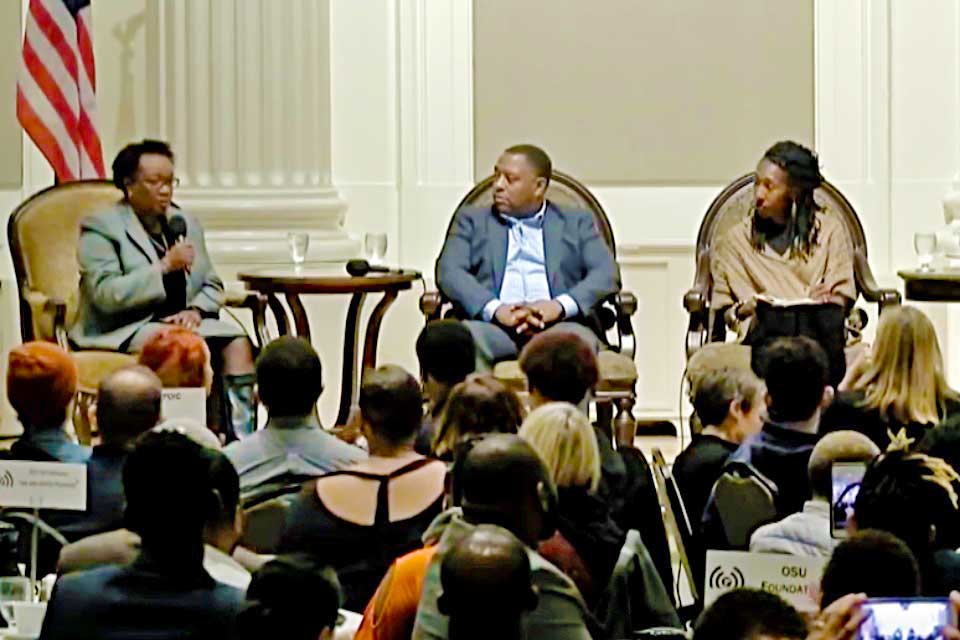 According to state testing standards, two-thirds of Portland’s Black students are failing their classes. Furthermore, that daunting statistic has been persisting over the last decade, says the EcoNorthwest report Black Student in Oregon, which was commissioned by local charter school KairosPDX and Chalkboard Project.

As a call to the community, KairosPDX co-founder Kali Ladd rallied students, educators and local organizations for a City Club of Portland Friday Forum on Nov. 30.

“Black children graduate at significantly lower rates than White students in Oregon and many other states,” said Oriana Magnera, member of City Club’s forum board, in her introduction.

“Given Oregon’s history of exclusion and creating systemic barriers for people of color, the state and community must do something.”

The subject of the forum was to how Oregon is failing its Black and African American students. And the proposed solution – community engagement.

Long-time education activist Ron Herndon opened Friday’s event by reading from the late William McClendon’s book “Straight Ahead,” a collection of essays on the struggle of Blacks in America. McClendon was a writer, journalist, jazz musician and a prominent member of Portland’s civil rights community until his death in 1996.

Herndon gave context to the current state of Black students by summarizing Portland’s failed integration policy of the 1960s into the early 1980s. In the name of desegregation, Portland Public Schools bussed Black children outside of their northeast communities to some 32 predominantly White schools around the metropolitan area. Schools in historic Black communities were ultimately shuttered.

“These policies and practices have created what we see today,” said Herndon.

“Currently the number of Black teachers and administrators is less than it was six years ago.”

To uproarious applause, Herndon closed by saying that changed lies with those who are willing to “fight like hell to ensure our children receive the education they deserve.”

Ladd began by explaining how using criminalizing language to describe young African American children is directly connected to suppressing student achievement. She mentioned examples where four-year-olds where being called “violent” by teachers and child care providers.

“It’s no wonder we have disproportionate discipline of Black children in pre-school,” said Ladd. “It’s because we’ve forgotten who they are. We’ve forgotten that they’re children.”

McFerrin drew parallels between rates of suspension and expulsion of Black students to what is referred to as the school-to-prison-pipeline.

“You’re two to three times more likely if you’re Black in Multnomah County to be suspended or disciplined,” he said. “What you’ll find in the data is that students who are disciplined at a higher level in school are likely to end up in the criminal justice system.”

Collins underlined the importance of having school districts and family members stand side-by-side to ignite difficult, but crucial, conversations.

“We know that there are teachers who are afraid of our kids and when our kids go to classes they have to deal with that,” said Lisa. “We have to talk about micro-aggressions otherwise there’s not going to be any engagement.”

Collins also discussed pathways beyond public school and raised pressing questions about students becoming college-ready. “How are we leading them to get the courses and counseling they need to prepare?” she asked.

For the panelists, partnership and community engagement was the top priority for improving Black student outcomes. McFerrin suggested that local businesses can help by partnering with African American-serving organizations, like POIC, through donations, internships or volunteer opportunities.

To the students in the crowd, McFerrin said, “I’m sitting up here calm and collected, but I’m pissed off about what I see.

"And I’m a little disappointed in myself, because I believe I can do better.”

Ladd added to the sentiment. “It’s only through partnerships that we really can begin to move the needle,” she said. “One thing we have in common is that we understand the relational way that we are – that’s a cultural thing. We have a relational taxonomy, so we build relationships.”

Towards its close, the panel opened to the audience. A handful of students approached the mic to comment on a lack of teachers of color in the district, as well as the importance of trauma-informed practices in the classroom.

“At this stage, we are discovering ourselves. And if we don’t have someone believing in us, it’s tough,” said Roosevelt High School senior Tosha Kitungano.

To end on a positive note, Ladd’s ultimate call to action was for everyone to start believing in Black students. “All the adults need to see our children and their brilliance, and live into that.”