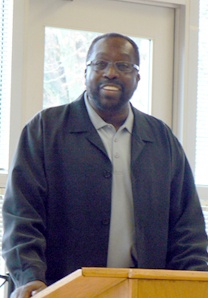 One of the NBA's greatest players of all time was recently in town. Basketball Hall of Fame legend, Earl "The Pearl" Monroe is hoping to raise awareness about a common urinary condition he suffered from, benign prostatic hyperplasia (BPH), or enlargement of the prostate.
Monroe talked to a group of men on Dec. 6, telling them about BPH and how they can recognize and manage the condition. The event, hosted by The Center for Multicultural Health, was held at Garfield Community Center.
Monroe, 61, is part of a national campaign called the "FLOMAX One Week Challenge," to educate men about BPH and encourage men age 50 and older to go online to www.oneweekchallenge.com and take a simple quiz to evaluate the severity of any unwanted urinary symptoms and to determine whether they should consult a doctor about diagnosis and treatment for BPH. Seattle is the final stop on Monroe's tour which began last month at Madison Square Garden in New York.
When he first started experiencing the symptoms of BPH, Monroe was hesitant to go to the doctor for a check up thinking it was just a part of getting older.
"I was getting up several times a night to go to the bathroom," he said.
After two years of suffering, he finally was encouraged to consult a doctor at the urging of his wife. "As men, we're hesitant to go to the doctor," Monroe said "we're so macho and yet at the same time were chicken." "Going to the doctor and talking to him brought about a healthy dialogue between us which is vitally important."
BPH, a common urinary condition that affects nearly 15 million men in the U.S., includes urinary symptoms such as frequent urination — particularly at night; recurrent urgent need to urinate; feeling that the bladder is not empty after urination; straining or pushing to begin urination; and hesitant, interrupted or weak urine stream caused by decrease force. As the prostate enlarges, it may compress the urethra which can lead to a gradual impairment of the normal bladder function.
These symptoms can also be caused be more serious conditions, such as prostate cancer, so it's important to see a doctor for proper diagnosis.
Easily managed with treatment, BPH symptoms can be improved in as little as one week. Treatment options include drug therapy and in some cases surgery. Alpha-blockers, the most common drug treatment, works by relaxing the prostate muscles to improve urine flow and reduce bladder outlet obstruction.
The main risk factor for BPH is aging. According to the American Urological Association, (AUA), nearly 50 percent of men age 50 and older have BPH and as many as 90 percent of men age 80 and older have some symptoms of BPH. Men with a family history of the condition may also have an increased risk of developing BPH.
"The older we get the more problems we have so that's why it's important to go to the doctor," Monroe said. "The doctor is the only one who can really tell you what's wrong, you can't diagnosis yourself so I'm challenging you to get checked out and get in control of your own life."
Before treatment, Monroe said he would miss parts of concerts, boxing matches and other events due to frequently running to use the restroom and what an inconvience it was. "It was just a hassle," he said. "I was doing the Knicks games and I would always have to run upstairs to use the restroom and hurry back."
Since treatment, Monroe said his life has been much better.
"It's improved my lifestyle dramatically cause now I don't have to stop at every rest stop or every tree," Monroe laughed.
"The most important thing that I've done with myself was being able to start to control my own destiny in terms of what I have and how to deal with it and that's what's important for you to do."
"There's a difference between living a good life, living a better life and not," he added.
The former New York Knicks star urges men to go to the doctor every six months for a check up and also encourages a proper diet and exercise routine.
Monroe said he understands that some men may be afraid of going to the doctor but added that that mindset has got to turn around and men can't hesitant to go to the doctor if they suspect something is wrong with them because the problem may get worse.
"If something's not right you've got to see what's wrong," Monroe added. "Anything that's not normal you should get checked out right away."
"Being in control of your own body is the most important thing for you cause when you're in control of yourself, you're in control of everything around you," Monroe said.
Born Vernon Earl Monroe in 1944, Monroe grew up in a tough inner-city neighborhood in Philadelphia. He attended Bartram High School in Philly and then went on to attend college at Winston-Salem State University, a small, historically Black college in North Carolina where as a senior, he lead his team to an NCAA Division II title while averaging 41.5 points.
Monroe began his NBA career in 1967 when his was the second pick in the NBA draft and was selected by the Baltimore Bullets. He was named NBA Rookie of the Year after averaging 24.3 points, finishing fourth in the league in scoring.
In 1971, Monroe was traded to the New York Knicks and was instrumental in the 1973 NBA Championships when they defeated the Los Angeles Lakers. After 13 years in the NBA, Monroe retired in 1980. During his career, Monroe amassed 17,454 points, 2,796 rebounds and 3,594 assists in 926 games.
A four-time NBA All-Star, Monroe has been named one of the NBA's 50 Greatest Players of All Time. In 1990, he was inducted into the Basketball Hall of Fame and he has also been nominated to be inducted in the Philadelphia Sports Hall of Fame.
Currently an entrepreneur, Monroe lives in New York and owns a restaurant and jazz club, The Pearl, located in Harlem, which opened in October 2005.