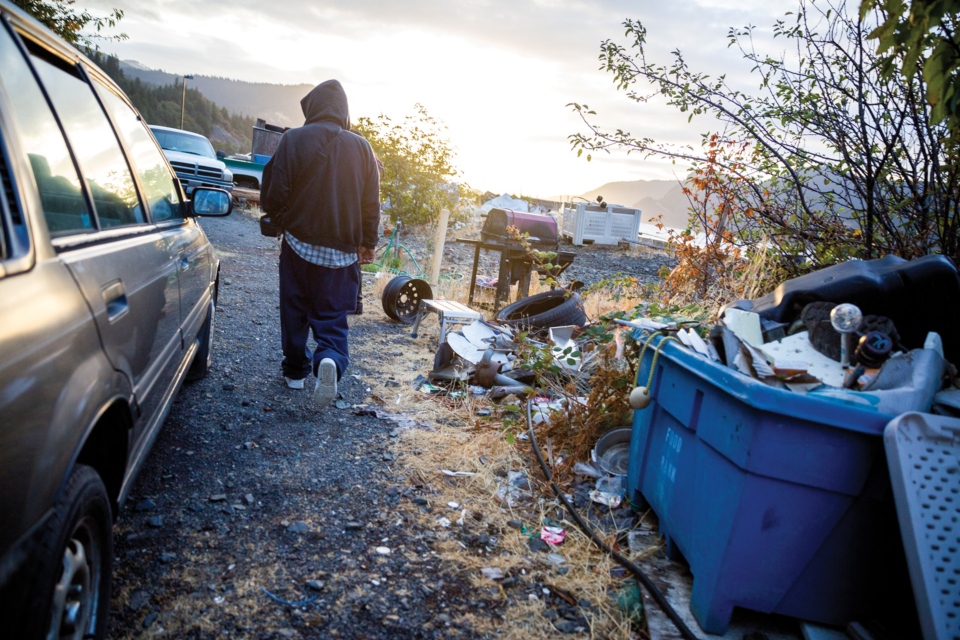 After more a year of obstacles, the federal government will resume a project to fulfill an 80-year-old promise. The Trump administration halted work in October 2017 on a plan to build a village for tribal members who fished the Columbia River for millennia, but last week, money reappeared in the budget.

"We're so delighted by the White House's decision to restore and direct funds to the Columbia River tribal housing initiative," said Charles Hudson, intergovernmental affairs director for the Columbia River Inter-Tribal Fish Commission. "We did a lot of scratching and clawing to keep this project active after a year of lapsed funding."

Leaders from the Warm Springs, Yakama, Umatilla and Nez Perce tribes have lobbied along with Congressional officials from Oregon and Washington to find a way to circumvent the barriers the Trump administration put in the way, The Oregonian/OregonLive reported .

A year ago, tribal members who live along the Columbia River were cautiously optimistic that the federal government was making good on one of its promises. Starting with the Bonneville Dam in the 1930s, the federal government flooded villages where tribal members lived. Many of those villages were centers of economic, social and religious importance.

The federal government said it would replace the flooded homes, but never did.

Now, many people live six months to year-round at fishing sites built by the government that are decrepit, unsafe and unsanitary.

The Oregonian/OregonLive documented the conditions and how the federal government's unmet obligation to the tribes forced them into these conditions even while a town of predominantly white people was relocated.

Oregon Sen. Jeff Merkley and Rep. Earl Blumenauer, both Democrats, spearheaded the effort to prod the government to replace the housing. They devised a plan with the Army Corps to pay for the work in two funding cycles. The first went forward in 2016.

But a second infusion of cash was blocked by Mick Mulvaney, head of the federal Office of Management and Budget, last year. He claimed that he wasn't required to approve the money and he didn't like the way it would be moved around the Corps' budget.

Tribal representatives and Washington and Oregon lawmakers pleaded with Mulvaney and his staff to reconsider.

But eventually, they found a way around the office. In a bill that dictates Army Corps priorities, they added language compelling the federal government to plan and build the villages.

Merkley and Washington Sen. Patty Murray, a Democrat, sit on the Senate Appropriations Committee and added more than $1.8 million to a separate funding bill without any dictates of how it must be used. A bipartisan and bi-state group of lawmakers wrote a letter to R.D. James, assistant secretary of the Army, and Mulvaney to suggest the $1.8 million be used to finish the village planning.

The Army Corps, which had signaled willingness to start the work since 2016, added The Dalles Dam village plan to its project list of 2019 with the $1.8 million.

"Now that the latest investment is in place, we will continue holding federal agency officials accountable to ensure that the plan is not only completed, but also carried out so tribal members get the facilities and river access they were promised more than 65 years ago," Murray said.

Merkley said Monday that he wants The Dalles village to move forward first, but it is not the last of his efforts. He and other lawmakers want to start the same momentum for villages at the Bonneville and John Day dams.

"It was an unnecessary delay and I'm really pleased to see we've been able to get the legislation in place to push it forward," Merkley said.

The money is needed to figure out where a village could be located near The Dalles Dam and how it would look. The Army Corps and a committee of tribal members had identified three Washington sites in 2016, but now need to figure out if they will still work. The site could end up on the Oregon side of the river.

The locations would need to be assessed for feasibility and environmental concerns. Tribal members are supposed to be involved at every step of the process, such as deciding whether the housing will be individual homes with covered garages, like at Celilo Village, or multi-family units.

Celilo Village, where 15 permanent homes take the place of one of oldest continually inhabited tribal centers in the world, took decades to build, but is considered a sign of success that could be replicated in this new effort.

But, it took 50 years and several iterations to get housing there right.

After the decisions are made, the plans would be subject to public input. The Army Corps would also perform preliminary engineering, according to Corps spokeswoman Sarah Bennett.

All that work was expected to be done in 2016 -- or shortly after. But now, the delay could add years to the project planning.

The Corps will have to ask for more money to actually build the village once all the planning is completed. There is no estimate of the cost yet.

At the same time, a stand-alone bill is in its final stages to fix up the existing 31 fishing sites. The sites are maintained and operated by the Columbia River Inter-Tribal Fish Commission, which took on the task because no one else was doing it. The fish commission largely focuses on salmon restoration and managing tribal fishing on the Columbia River.

The money to maintain the sites is quickly running out because it was created with estimates that undercounted how many people would use the sites. The Columbia River In-Lieu and Treaty Fishing Access Sites Improvement Act would allow the U.S. Bureau of Indian Affairs to evaluate what improvements are needed at the sites and how much money it would take to bring them up to a safe, sanitary standard.

The bill has already passed out of the Senate and is on the House floor awaiting a vote. From there, it would go straight to the president's desk to be signed into law.

"The Trump Administration has been putting up barriers to this project for too long and I'm glad they've finally decided to allow progress," said Blumenauer. "While this process moves forward, they should also work with Congress to rebuild faith with the tribes and pass my legislation to improve conditions at the current in-lieu and treaty fishing access sites for those without housing."