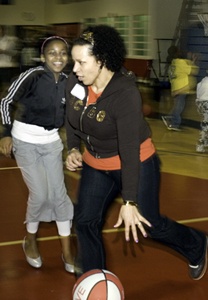 Donn Spight could have said he just doesn't have the time. The unmarried African American laparoscopic surgeon says he sometimes works 80 hours a week. He could have been the poster child for men who claim to have no time to spare.
But Spight admits that he also wastes a lot of the free time he does have. So instead of hiding behind his busy schedule, he made a yearlong commitment to mentor an African American boy who needs a solid male in his life.
"A lot of people feel they don't have enough time," Spight said. "But to see the impact you can have on someone's life (is very rewarding)."
Spight was one of about 50 mentors who gathered for the Big Brothers Big Sisters' kickoff of the new African American Mentoring Program Saturday at the Salvation Army center on Williams Avenue. Although Spight already is a committed volunteer, many others turned out to test drive being a mentor for the day.
Getting African American adults to become mentors for African American Little Brothers and Sisters – the majority of whom are classified as "at-risk" – is especially important, says Pamela Weatherspoon, the program manager. About 400 African American children are currently on a waiting list and the Big Brothers Big Sisters organization has identified thousands of others as being in the position to need a mentor. And Weatherspoon says it's particularly important to get African American males to mentor.
"A lot of boys have been on the waiting list for a while," she said. "We've found a lot of African American kids, but not a lot of African American male mentors."
Men like Spight are scarce in the Big Brothers Big Sisters organization. More than 70 percent of the organization's volunteers are women. So why are so few men stepping up to the plate?
It may just not come naturally to some men, says Daryl Dixon, a father of five and first-time mentor. Dixon serves on the organization's board of directors and the mentoring program's council.
"It's simply spending time with someone," he said. "Men just need a bit more education (about mentoring)."
Meeting since October, the African American Mentor Program Council reached out to the community the old-fashioned way – word of mouth. The Big Brothers Big Sisters organization realized there is a need to pair children with adults who look like them. Modeled after the organization's Latino program, the African American program is receiving funding from a $22,800 grant from the United Way. The grant has enabled Big Brothers Big Sisters to assign one person – Weatherspoon – to devote energy to the project. Weatherspoon says this is a formula for success. It's given her time to nurture the fledgling program and reach out to some of the movers and shakers in Portland's African American community.
But holding regular events that allow people to try mentoring for a day might be the best way to recruit. It also didn't hurt having a few local celebrities show up, including several Trailblazers. Brandon Roy and several teammates were there to shoot hoops with the children, and Jammin' 95.5 Radio came to provide the soundtrack.
Many adults and children at the event were instantly talking and learning from one another.
Weatherspoon says they prefer to have Big Brothers and Sisters commit to being a mentor for either one year or half a year, usually coinciding with the school year (half year commitments are generally taken at the New Year). It helps create a more fluid relationship with a child.
Rahel Yared said she wanted to make sure she had enough time to devote to the program, but if three hours every other week was all it took, she might be able to squeeze it in to her busy schedule. Yared, an educator, wants to make sure she doesn't deprive a potential Little Sister of the emotional connection.
But Spight says he isn't worried about finding the few hours it takes every other week. He's looking forward to the next time he and his Little Brother can hang out. He says someone considering mentoring should not let expectations stand in the way. Oftentimes, his expectations are greater than their's.
For more information about volunteering, or  mentorship, contact 503-249-4859 or visit their Web site at www.bbbsnorthwest.org.