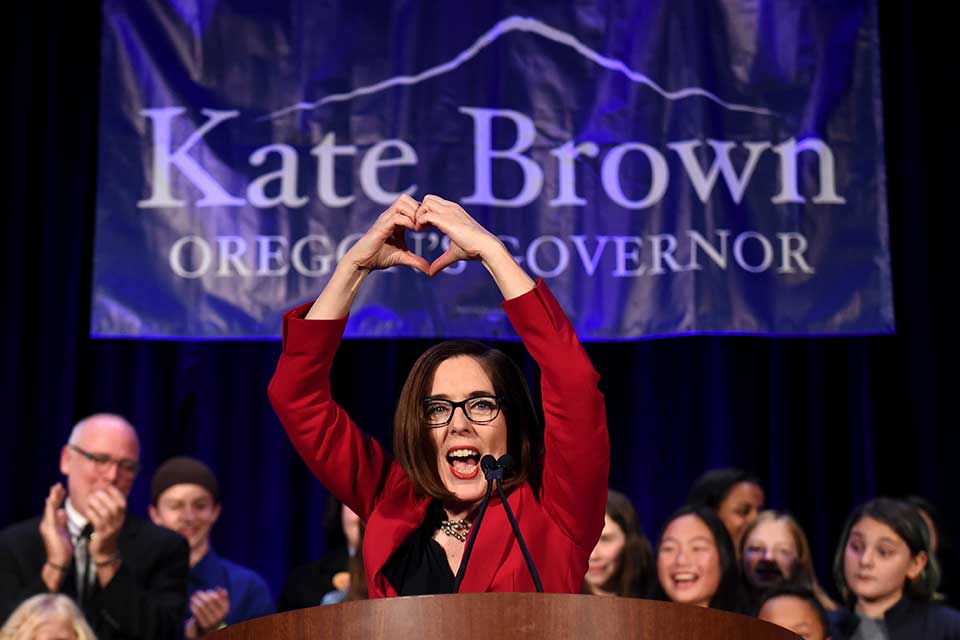 Tonight, I invite you all to help celebrate the things that make Oregon great. And tomorrow we will work together to build a better Oregon for everyone. Thank you all, from the bottom of my heart. #TeamKate #orpol

Brown noted that several female candidates had won governorships in the Tuesday elections, and that Oregon voters had rejected a ballot measure to repeal the state's sanctuary status for immigrants.

"With this election cycle we tripled the number of Democratic women governors serving in this country," Brown told a cheering crowd at a Portland hotel. "Tonight, we can say we fought to keep Oregon a welcoming and inclusive place for all."

Brown said she would work on behalf of campaign finance reform, repeating a pledge she made to Patrick Starnes, the candidate of the Independent Party, when he withdrew from the race on Oct. 30 and supported Brown.

"No one should be able to buy the governor's office," Brown said.

In the run-up to the finish, the Kate Brown Committee had received almost $10.3 million in cash contributions; the Knute for Governor Committee $13.2 million, according to the Secretary of State's office.

Buehler, a Republican member of the Oregon House whose term expires around the end of the year, conceded defeat before a group of dejected supporters at a different Portland hotel.

"Tonight I lost an election, but I do think this competitive governor's race has made all of us better, that democracy has won," he said. "Competition is good for all of us - and we offered voters a choice."

The orthopedic surgeon said he'd go on vacation while he figures out what to do next.

Brown was first appointed governor in February 2015 after Gov. John Kitzhaber resigned. She easily was elected in her own right in 2016 to finish out the term of Kitzhaber, who resigned amid accusations of influence peddling involving his fiancee.

The 58-year-old Brown was a long-time state lawmaker before becoming secretary of state in 2009.

The last Republican elected governor in Oregon was Victor Atiyeh, who served from 1979 to 1987.

Buehler sought middle ground on issues like immigration and criticized the Trump administration for pursuing rule changes that could hurt health care for immigrants.

Buehler had been criticized by immigration advocates upset at his support for Measure 105. That initiative would repeal Oregon's three-decade old sanctuary law, which limits state and local police cooperation with federal immigration authorities.

Brown used the immigration issue to try to tie Buehler to the right wing of his party and criticized Buehler for supporting the measure, which she argues could lead to racial profiling and discourage immigrants from reporting crimes to the police.

During debates and the campaign, the candidates also returned repeatedly to the state's public pension crisis, the state's biggest fiscal issue. Buehler said he wants to transition state employees to a private-sector style, 401(k) retirement plan and accused the governor of "pandering" to public employee unions by raising pay before instituting broad pension reform.

Brown said public employees "need to have some skin in the game," and pay some of their own pension costs, but didn't offer specifics.

The governor resisted the notion of wholesale cuts, attacking Buehler at one debate directly: "I think it's easy for a millionaire to say he's going to cut the retirements of hard-working Oregonians. I'm not willing to do that."

Grayson Dempsey, executive director of NARAL Pro-Choice Oregon, said of Brown's win: "I will say that the stakes right now in America are too high to have anything less than a true champion (of abortion rights) in the governor's office. Having Gov. Brown is a huge relief."