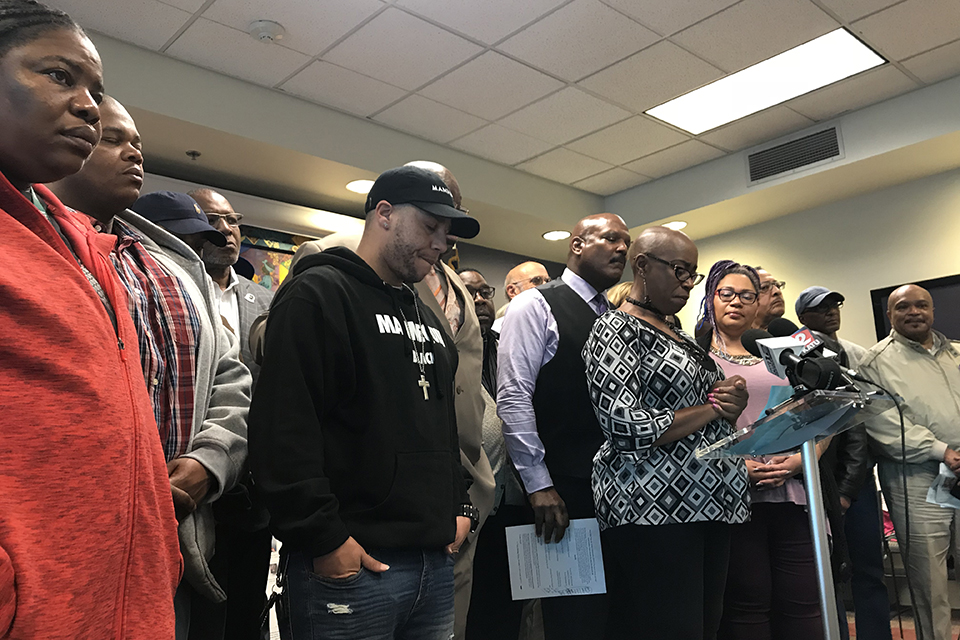 On Friday morning community and faith leaders gathered at the North Precinct building of the Portland Police Bureau to call for an end to gun violence and to offer support and healing for those who have survived trauma.

The precinct building’s Kevin Modica Community Room, was decorated with years’ worth of posters commemorating people who had died from gang violence. The press conference came on the heels of the Interfaith Peace and Action Collaborative meeting and reporting that between Sept. 30 and Oct. 25 police responded to gunfire 20 times across the city, and that six people had died due to gun violence. That count includes two fatal officer-involved shootings as well as gun deaths and reports of gunfire from civilians.

“On behalf of representatives of faith communities, the first thing I want to say is I’m sorry if we have not done our job in helping you feel like you have a place to go,” said the Rev. Matt Hennessee, pastor of the Vancouver Avenue First Baptist Church, who described the recent uptick in shootings as “a public health issue.” He talked about being at the hospital and talking to a family that arrived thinking their child was still alive, and having to deliver the news that that was not the case.

“Everyone of us has an opportunity to be a peacekeeper,” Hennessee said.

“It is no secret that our community is often first affected and last left unharmed,” said the Rev. E.D. Mondaine, pastor of Celebration Tabernacle Church and the president of the NAACP Portland Branch. “I’m appealing to all of you to be a solution because we are people that truly can.”

“Portland is too small for most of us not to be related or know somebody,” said the Rev. Herman Greene, who is senior pastor at Abundant Life Church, but said he was at the event as a father, uncle and community member. “Please, on behalf of somebody standing here, hear our hearts and please stop.”

Erika Preuitt, director of the Department of Community Justice’s Adult Services Division, said community members should be aware they can contact her department for help connecting with services, including mental health and housing.

And community member Joe Bean Keller, who began volunteering in gang outreach in 1986 and whose son, Deontae, was killed by Portland police in 1996, announced he would hold the first of a series of talk sessions at his home Oct. 27. He told The Skanner he intends to make the talks a recurring monthly event and that all members of the community are welcome.

Antoinette Edwards, director of the Office of Youth Violence Prevention, said families seeking assistance or information should call her office, (503) 823-8263 or the Gang Impacted Family Team at (503) 823-4438.

Kimberely Dixon, who talked about her son, Andreas, who was murdered in 2013, and the lifelong impact of grief, also implored those present to turn their ballots in.

“If it costs about $30,000 a year to keep someone in jail, we don’t have a budget issue, we have a prioritization issue,” Dixon said.

“Nine times out of 10, by the time a young person has picked up a gun, there are several systems that have failed,” Robbins said.