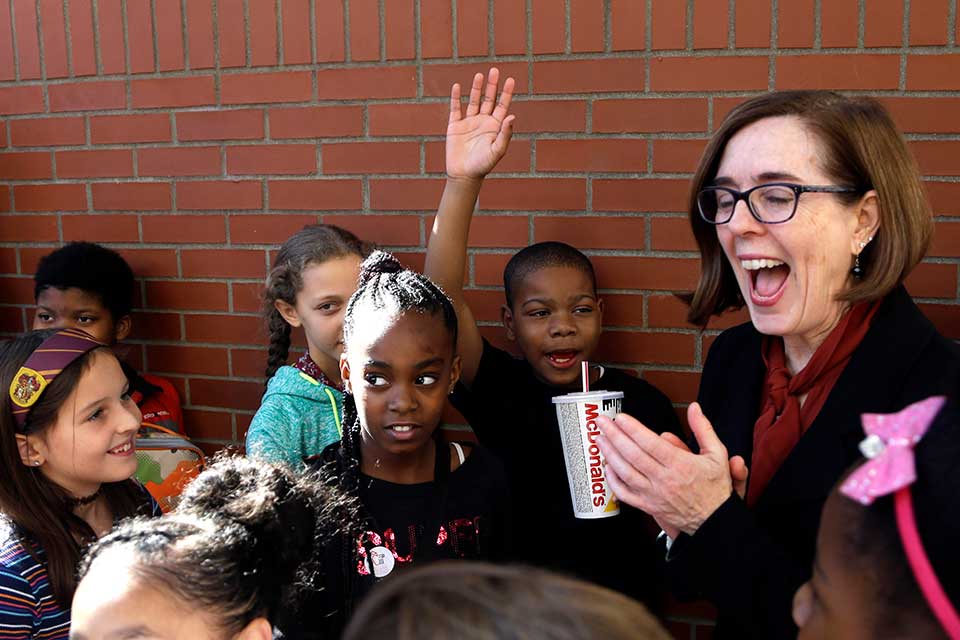 PORTLAND, Ore. (AP) — On a warm fall day, Oregon Gov. Kate Brown stood in a public square known as Portland's living room, surrounded by excited children on their way back from a field trip to a local courthouse.

Brown used the pronoun 'she' as she explained what a governor does — until one child reminded her that a boy can be governor too. "Or 'him,' yes. Well ... right now, it's a 'her,'" Brown said, moving on quickly to the next question.

It was an unscripted moment in a closely fought gubernatorial campaign, but it was also a telling one.

Brown, an incumbent and one of just two female Democratic governors nationwide, has struggled to create distance between herself and her GOP rival, a state lawmaker who has fashioned himself as a moderate Republican who appeals to independents and centrist Democrats alike with his anti-Trump and pro-choice platform.

The tight contest has drawn national attention to this unabashedly blue state where a Republican governor has not been elected to office in more than 35 years. Democrats have won 29 out of the last 32 statewide races here, but the Cook Political Report, a nonpartisan organization that tracks gubernatorial races, just labeled this election a "toss up."

"I'm shocked that this is even close. This is a race I thought we weren't going to need to work on — and it turns out this is the one I'm spending the most time on," said Ali King, co-founder of a Democratic activist group called Nasty Women Get Shit Done. "I didn't think it was going to be a battle like this."

Oregon is a vote-by-mail state and Oregonians have had their ballots in hand since last week, making the final push for Brown's campaign even more critical.

Those who follow Oregon politics closely point out that Brown's race with Rep. Knute Buehler isn't much tighter than previous ones and that outside of the biggest cities and college towns, the state has plenty of GOP voters.

But in such a partisan moment nationwide, Democratic poll-watchers are feeling a sense of urgency about Oregon.

A recent nonpartisan survey put the number of undecided voters at 17 percent. Many of those voters are independents or moderate Democrats who could be swayed by Buehler's GOP lite strategy.

Brown said in a recent interview her polling numbers are consistent with other Oregon gubernatorial races and she's confident a large Democratic turnout will lead her to victory.

"I've been watching these governor's races for a couple of decades now," Brown said, adding that "horrible attack ads" over the summer took a toll.

"There's a lot of money being spent to try and defeat me.

"That money is being spent specifically because I have been successful in leading on a progressive policy agenda."

The eldest of four, Brown trained as a lawyer before being appointed to the Oregon House in 1991 and then staying in state politics for almost 30 years. She was elevated to Oregon's first female Senate Majority Leader before running successfully for Secretary of State in 2008.

When Gov. John Kitzhaber resigned amid scandal in 2015, she automatically filled the top job under Oregon's constitution. Brown then easily won a special election in 2016, trouncing the Republican candidate by 8 percentage points.

As governor, Brown tends to work quietly behind the scenes and is fond of saying she's GSD — "Getting Stuff Done" — rather than engaging in flashy politics. She is skilled at "retail politics" and often accomplishes her goals without burning bridges, said Chris Shortell, an associate professor of political science at Portland State University.

That style resulted in several victories for Brown, first as secretary of state, and then as governor.

In 2015, Brown signed into law Oregon's so-called "motor voter" law that she helped craft as secretary of state. The law requires the state to register to vote anyone who applies for or renews a driver's license or ID card and it has boosted the rolls of eligible voters by roughly 15 percent.

Brown also worked across the aisle to pass the largest transportation bill in state history, oversaw the expansion of health care coverage (94 percent of Oregonians are insured) and has pushed back against the erosion of environmental protections under President Donald Trump.

Brown, who is the only openly bisexual governor, is also pro-choice — a key quality for Democrats because Oregonians are also voting on a ballot measure to ban state funding for abortions.

But some feel Brown has fallen short on two other issues that plague Oregon, secondary education and the pension system. The state's pension system has an unfunded liability of $22 million, while the state's graduation rate is third-worst in the nation and student absenteeism is a big problem.

"When you talk to insiders, they'll talk a lot about her leadership and her leadership style. I don't hear voters say that about her, directly, but I do hear that there are problems in the state," Horvick said.

This week, Brown took another hit when The Oregonian/OregonLive reported that her hand-picked chief of state education delayed the release of statistical school rankings three weeks, until after the Nov. 6 election.

Brown says the state's troubled education and pension systems are problems she inherited and she has taken important steps to address them that aren't quick fixes, but will yield long-term results.

"Women's styles of leadership aren't considered leadership by a lot of people. I am not strolling into a room and pounding on the podium," she said.

"You can get a lot of stuff done when you don't care who gets the credit."

Matt Hanson is a registered independent. He leans toward Democratic candidates and voted for Brown in 2016. Now, he's undecided and may vote for Buehler because of concerns about education and unfunded pensions.

"I'm kind of right in the middle on politics usually, but there's been some stuff that needs to improve in the state with education big time," he said, as he watched Brown's recent political rally from afar while enjoying a food cart lunch in the sun.

"I've got little kids coming into middle school now and the graduation rates are so low, it's kind of embarrassin."

But for others, having a Republican governor in a blue state would be the biggest embarrassment of all.

"She kind of inherited a bit of a mess and she's been working on it as best as she can," she said.