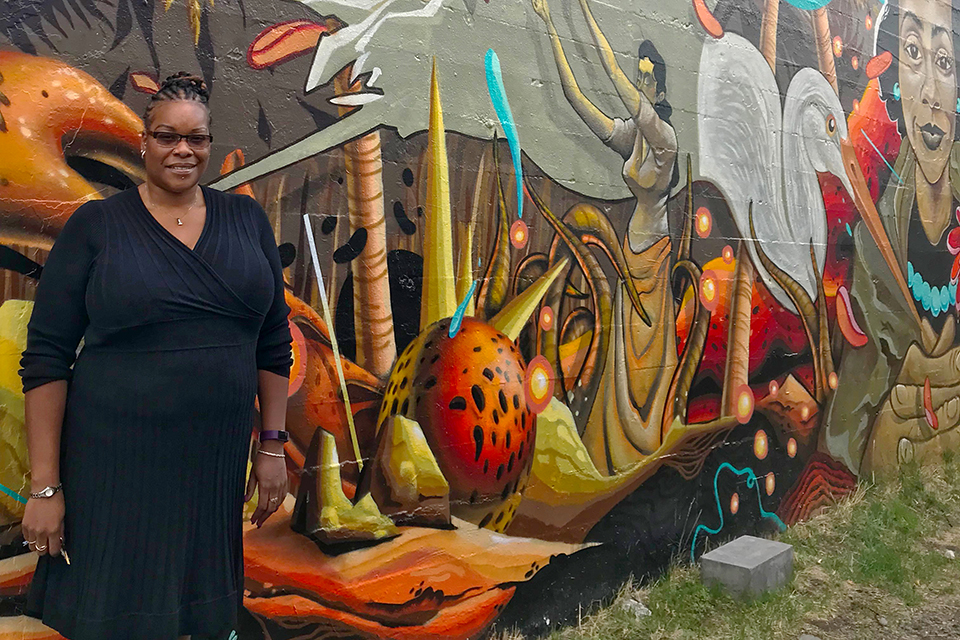 It’s a quick way to recharge and take care of herself in what can be consuming work.

“I’ve been in education and social services my whole career. It’s consuming work. It’s passion work,” Foster said, and learning to strike an appropriate work-life balance and care for herself has been a major project.

Foster moved back to Portland at the end of September to step into her new role as executive director of the Black United Fund of Oregon.

A Portland native and Benson High School graduate, Foster holds two bachelor’s degrees from Portland State, two master’s degrees – one in education, from PSU, and one from Capella University in nonprofit management – and a doctorate in leadership and development from Lewis & Clark College. That adds up to more than 20 years in postsecondary education, during which Foster also worked full-time in education and social services.

Most recently, she worked as a remote consultant and program officer for the Portland-based Black Educational Achievement Movement while living near family in Texas for two years. She started her job Oct. 1 and is still getting re-acclimated to life in her hometown.

“It was one of those right time for the organization and right time for me things,” Foster said of her role at BUF, which was created in 1983 by Black leaders in North and Northeast Portland to address a lack of local philanthropic support for communities of color. Foster said the organization will continue building on that legacy, offering scholarship application assistance, mentoring for Black youth and continuing to rent office space in its Northeast Alberta building to small nonprofits for below-market rent.

Black United Fund of Oregon reported $331,660 in revenue in 2016, according to its tax filings. The organization awards scholarships to local colleges and universities starting at $8,000 per year, as well as scholarships named for community members starting at $1,500. For more information on scholarships, applications and deadlines, visit https://www.bufor.org/empower-scholarships/.

She also said she’s hoping to increase the organization’s volunteer corps and is mulling ways the organization can make use of its building, which is one of the few remaining Black-owned structures on Northeast Alberta.

Foster also said she’s stepped into BUF at a time when it’s in a growth period, as opposed to a crisis-management period, so there’s room to envision BUF’s future as opposed to focusing on trying to keep it alive.

“Alaiyo brings with her to BUF an in-depth understanding of the Black Community in Oregon, and the issues that exists for students of color and low-income students within our learning system,” wrote outgoing executive director Kimberlee Sheng in an email announcing her departure and Foster’s hiring to BUF supporters. (In June the American Leadership Forum announced Sheng had been hired as its executive director.)

Symone Sparrow, education programs specialist for BUF, said BUF hired a consultant to recruit a new executive director, but that the team was able to sit in on interviews. It was ultimately Foster’s presence and passion that made her stand out, Sparrow said.

When she’s not working, Foster said, she participates in Crossfit and loves to travel and read and visit spas, as well as connect with family. Her commitment to her work is driven in part by a desire for her son, who is almost 16, to see his community as a place where he can grow and thrive.

“Stay tuned. Definitely stay tuned,” Foster said of BUF’s near future. “I’m looking forward to the next couple of years.”