‘Cop Out’ Takes a Different Look at Policing 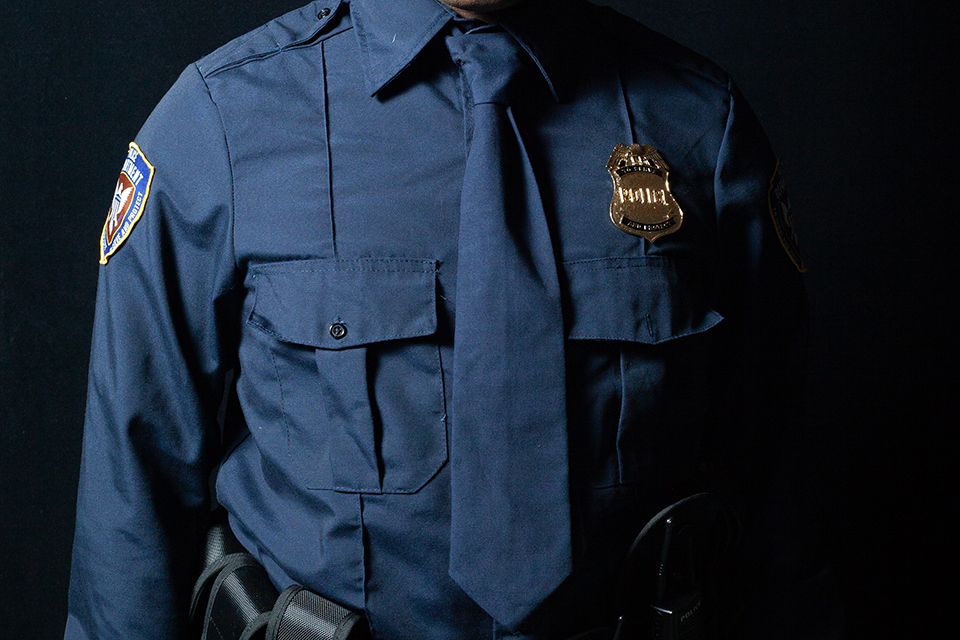 Two years ago, the August Wilson Red Door Project presented “Hands Up,” a series of monologues from the perspective of Black people who had experienced police profiling or brutality.

The Portland-based organization didn’t do much to market the production and did not solicit reviews, instead letting word of mouth build. That strategy was a success: 25 people showed up for the first presentation and at more recent productions, people have been turned away at the door. Over the next two-and-a-half years, the show toured around the Northwest, and the production continues (the next performance will be at Wayfinding Academy in North Portland).

“It continues to be quite a phenomenon,” said Kevin Jones, executive director and cofounder of the Red Door Project.

But Jones also describes “Hands Up” as “one-sided,” and that one-sidedness became more apparent at discussions following the show, as law enforcement officers began to show up and participate.
Jones made contact with Bob Day, now deputy chief of the Portland Police Bureau, then captain of the bureau’s training division, and began to build a relationship with the police. The organization staged a production for police officers only and held a discussion afterward.

“It was not an easy conversation,” Jones said, but later Day told him it was the first time he’d heard police stay in a room together and talk about how they felt.

Out of that relationship-building comes “Cop Out: Beyond Black, White and Blue,” a series of seven monologues from the perspective of law enforcement officers, focusing on the experiences of Black and brown officers.

To create a followup production, the Red Door Project hired writers all over the country, most of them African American, to create a series of monologues from the perspective of police officers, based on real stories drawn from interviews. Officers could choose not to be identified by name in the series, though some allowed their names to be used. Ultimately playwrights submitted 19 monologues, seven of which will be produced

Shepsu Aakhu, a Chicago-based writer who contributed three monologues to “Cop Out” and also acted as the show’s dramaturge, helping shape the submitted works into a cohesive production, said the project interested him because it offered the opportunity for a more candid conversation about race and policing.

“I think the whole thing is terribly important. The whole thing is just a little bit scary. Most of the conversation around this particular topic, I find to be incredibly tepid,” Aakhu told The Skanner. “Everybody is concerned about being PC and about hurting people’s feelings. Once I heard the chance to have a candid conversation, I got interested.”

Aakhu’s monologues include one called “Locked and Loaded,” based on an interview with a childhood friend of Aakhu’s who is now a police officer in Detroit. The friend described looking in the mirror after dressing in riot gear: “How can anyone actually think of you as anything other than a machine when they see you in this paramilitary gear?”

The second, “PSA,” describes an officer’s frustration at being sent to calls that waste officers’ time, the nature of which have made headlines recently: Black men waiting in a Starbucks, Black families barbecuing in a public park and Black children selling water from their stoop – all of which he called examples of the public “weaponizing their insecurities,” including their racial biases.

“You have to be mindful of the fact that not everything that makes you uncomfortable deserves an armed response,” Aakhu said.

The production previews at Portland’5 Centers for the Arts this weekend and is set to premiere at SEI later this fall.

Jones said the concept for the new show has rubbed some the wrong way, and he’s been accused of having Stockholm syndrome: “A lot of folks say, ‘I don’t want to hear anything cops have to say. I don’t care.’”

The idea is not to equivocate between officers’ experiences and the experiences of Black civilians, Jones said. The struggles are not equivalent. He also doesn’t have any illusions the production itself will change policing in Portland or the United States (he does hope the production will eventually tour nationally).

But the stories “Cop Out” presents are complex and challenging, presenting a more nuanced picture of policing than presented in TV cop shows or video clips of shootings or beatings, Jones said. And he argues that being human requires participation in difficult conversations.

“Sitting in a room listening to a person you disagree with is good for the soul,” Jones said.