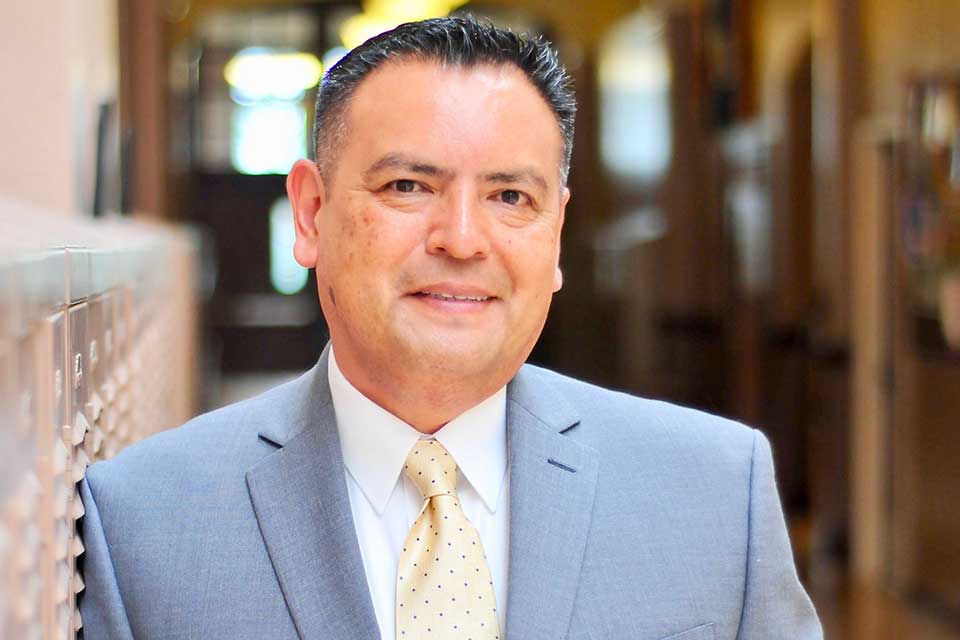 Oscar Leong has been president of De La Salle North Catholic High School for two months, but he’s already proud of the youths in his new Portland community.

A native of Los Angeles, Leong has been a Catholic educator in the Lasallian tradition his whole life, working with families of color and immigrant communities to prepare their kids for college and rewarding careers.

With the Fall Benefit Dinner and Auction coming up at the school Oct. 24 (it’s themed like a first-class airplane trip with a VIP boarding pass), The Skanner sat down with Leong last week to chat about his experience, his vision and his academic focus for De La Salle North.

The Skanner News: Can you give us give us some background on yourself?

Oscar Leong: Sure. I am an immigrant, I was born right across the border in Tijuana, Mexico. I’m half Mexican and half Chinese. My father immigrated from China when I was nine years old and ended up in Baja, California, and through the blessings and love ended up meeting my mom. They ended up getting married. And then we immigrated when I was seven years old, to Los Angeles, California.

I ended up there for 43 years, and many, many, many good people impacted me at my old high school, Cathedral High School right in downtown Los Angeles. It is very similar to De La Salle in many ways, both schools are operated by the Christian Lasallian brothers, and the Christian brothers mission is the La Salle mission -- regardless of religion, we teach to the heart. My mentors saw more in me than I ever thought. Their impact on me when I was in high school was phenomenal, and I see that impact happen here at De La Salle.

OL: From my point of view, our strength is really trying to make sure that we understand the child’s path in life. It’s also what we can do to reinforce that child’s level of confidence, open doors, invite the parents into the conversation. So the parent component is super important because they’re looking for something more, I think that’s really important here. What we do is offer opportunities to students who may not otherwise be able to go to a private school.

We also offer important opportunities through what is called the corporate work-study program. And that program I think is really the stepping stone of huge things. That’s the part here that is truly special, it is truly a game changer. Because the opportunity to have every one of these kids walk into these ivory towers – and they’re not understanding what kind of person works there and their journey there – but once they’re in the office and are considered an employee of the company, they start to create relationships with these mentors.

The kids have conversations with their professional coworkers about their college degrees and jobs. I think our kids have an opportunity to see the path, where before the path was blocked by different factors. I think having our students in there, understanding the fabric of corporate America, really makes them think outside the box. That’s really the difference at school like De La Salle. We really think De La Salle kids are a true reflection of Portland.

TSN: How does it work?

OL: For every student that we accept, the agreement is that the corporate work-study Program is embedded into their weekly schedule (reporter’s note: the wage the student earns from it also pays almost all of that student’s annual De La Salle school tuition.

During the first week that I was here I wanted to see what it was like for students to travel to their work, so I actually job-shadowed two freshmen students who went downtown on TriMet. For me it seemed exciting -- also I could see daunting -- for a freshman. For both of the students I was shadowing, it was their first time traveling to downtown on the TriMet.

And now as I meet that girl and boy on the campus they’re so different. Their confidence levels -- the way they shake my hand, the way they look me in the eye -- is so different. I ask them, “How’s work?” And they are talking to me like they are adults. They’re talking about things that did or didn’t work, things they really enjoy, things they do not enjoy. But also the smile on their faces tells me that they are enjoying the work.

It doesn’t always go perfectly but for the most part kids come back satisfied with learning. And that’s part of school. Yes, learning can happen in a science classroom, in the math classroom, in the English class, but there’s also world learning, and I think that’s a very important part of our partnerships.

TSN: Looking at a list of your community partners it seems mostly white-collar companies like accountants, attorneys and designers. There are also medical companies and some local manufacturers, plus the US Forest Service. How do you recruit them?

OL: We’re always looking for new partnerships, we’re always in constant communication with our current partners but also looking for new opportunities. We’re offering our partners a chance for two worlds to come together that normally would not. I think that having our kids start their career paths at the ninth grade level when these kids are 14 years old – that’s a four year leap that doesn’t happen to most kids. Especially to most kids that we serve, who normally would not have an opportunity.

What is really impressive about our school is that we are considered the most diverse school all of Oregon. We have kids who are Caucasian and blue-eyed walking on campus along with students who are Latino and African-American; we have students from the Ethiopian community. You don’t find that diversity in many areas – and I’m not even talking about Portland, Oregon. I’m talking across the nation.

We now have graduates who started at our school who are working for a company, went to college, got their degree, and are now actually managing our own De La Salle kids at that company. That’s the best scenario for us. Because it worked, it’s working. So in the future we know we’re going to have attorneys working at Stoel Rives, accountants at Deloitte, I know it’s going to happen.

TSN: Academically speaking, what is your vision for the future?

OL: We really want to push the bar in terms of what we offer in terms of science resources. We are a great partner in the science field, we are partnering now with both Portland Community College and the University of Portland. The University of Portland project is very exciting, it’s an engineering program where bout 15 or 16 students actually spend the semester learning engineering amongst the university student body. And that was done through a partnership with some very generous and very engaged donors who thought these kids would be awesome.

But I think also universities are saying -- look, there’s talent there. A growing number of our kids are studying in university science programs -- not only locally. A good number are going to PSU, the University of Oregon, Oregon State, the UP. But in last year‘s class we had two boys, one going to Swarthmore, and another young man who’s going to a school in Troy, New York called Rensselaer to study engineering. And we have kids who now are getting their Master’s degree at Harvard – it’s an amazing journey. And I’m really proud to be here.