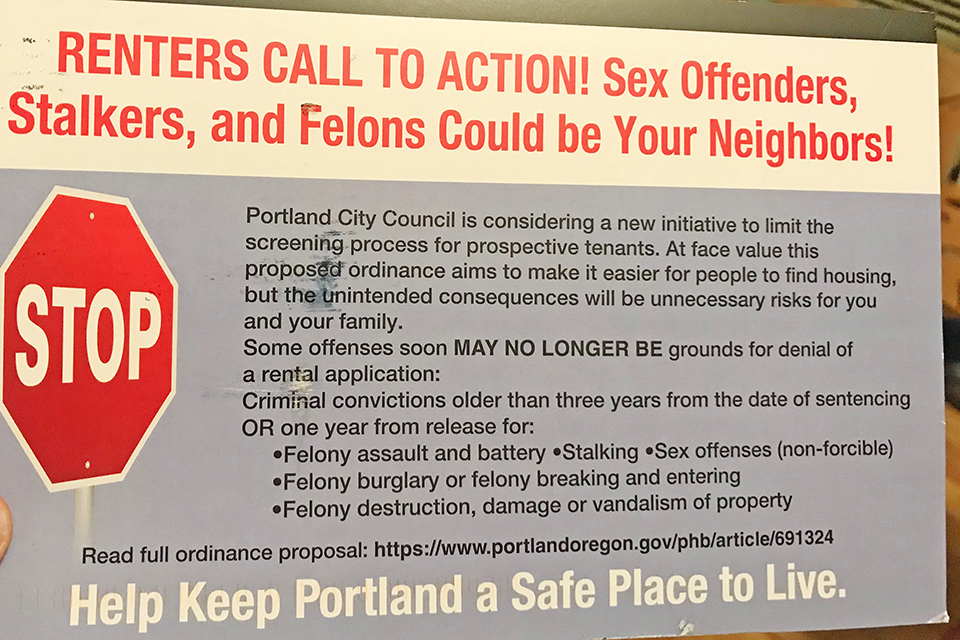 The City of Portland is considering an ordinance that would more clearly define screening criteria for renters, and a Portland-based landlords’ group is making a public case against it.

That’s not out of the ordinary. Multifamily Northwest regularly engages in political advocacy on its website and its political action committee, Equitable Housing PAC, is a notable political spender, shelling out more than $300,000 in 2016 and $25,000 this year – most recently contributing $10,000 to the Committee to Elect Loretta Smith in August.

This time, though, the organization has sought the attention not of landlords or candidates but of renters themselves.

Last week a reporter for The Skanner received an oversized postcard reading, “RENTERS CALL TO ACTION! Sex Offenders, Stalkers, and Felons Could be Your Neighbors!” 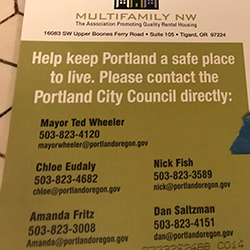 The postcard goes on to state some offenses “soon MAY NO LONGER BE grounds for denial of a rental application,” listing among them criminal convictions older than three years from the date of sentencing or one year release for felony assault and battery, stalking and non-forcible sex offenses. It includes a URL for the ordinance proposal -- https://www.portlandoregon.gov/phb/article/691324 -- and office contact information for all five city commissioners. Sophia June, a spokesperson for Mayor Ted Wheeler’s office, said the mayor’s office has received eight emails mentioning the mailer and that feedback had been mixed in terms of support for the ordinance.

“I would say that we received a handful of comments -- it wasn’t a lot, and for both sides,” said Jamey Duhamel, director of policy for commissioner Chloe Eudaly, whose office developed the ordinance. “I can think of maybe three or four comments, that say ‘Don’t do this.’ They’re mostly from landlords, though -- not so much from renters. I think that’s interesting.”

In its current form, the ordinance states that a landlord “may consider only income and certain credit, rental and criminal history of an applicant as set out in this ordinance, and may only consider that information that is relevant to the applicant’s likely performance as a tenant.”

It doesn’t actually say that a landlord can’t reject a tenant based on criminal convictions – but a landlord who does reject a potential tenant based on certain criteria, including certain criminal convictions, has to provide an individual assessment explaining why the applicant was rejected. Even then, the ordinance specifies that the violent offenses included on the “low-risk criteria” list are only in consideration if it’s been more than three years since sentencing or one year since the applicant was released.

Under current state law, a prospective tenant has the right to ask for a written explanation after being denied a housing application. Oregon landlords also have the right to deny rental applications based on criminal convictions and to terminate, with 24 hours’ notice, the tenancy of those who commit acts of physical violence against another tenant on their property.

In some ways the individual assessment is analogous to the form rejection credit card companies must provide if rejecting a credit-card applicant or customer for a line of credit or an increase in credit limit. But because the proposed ordinance doesn’t require a rejected applicant to ask for a reason they were rejected, it could create more paperwork and red tape for landlords.

“You can still deny housing for [adverse criminal backgrounds], you have to provide an analysis. It’s guidance for an individualized assessment,” Duhamel said. “The real issue isn’t around those criminal histories. The real issue is landlords use online platforms to get denials or approval within minutes. What we’re requiring them to do is a more manual process. It’s a more humanizing process that requires them to take more time.”

To say it will have the consequences the postcard states is a stretch, said Katrina Holland, executive director of the Community Alliance of Tenants – and one that plays to fears and prejudicial tendencies. Holland also said she hasn’t seen anything like the mailer in 11 years of renting in Portland.

“From our perspective, this was disappointing to say the least,” said Katrina Holland, executive director of the Community Alliance of Tenants. “This is despicable.”

“[The ordinance] calls for a new “individualized assessment” which is far more administratively burdensome than the HUD requirements. Effective, fair and objective resident evaluation systems are already used by property management professionals,” the post reads. “Multifamily NW has expressed grave concerns on behalf of all of us to city leaders regarding the screening criteria proposal; however, they have not listened to the industry they’re so keen to reform.”

“We represent a diverse group of rental housing providers. Educating our members and Portlanders about proposed changes in the housing ordinance is part of our work. Many of our members are concerned about the impact of these proposed changes, and we hope all residents will engage with the City on this issue,” wrote Multifamily Northwest executive director Deborah Imse in an emailed statement to The Skanner Wednesday morning. Imse did not respond to messages asking how many mailers were sent and how recipients’ addresses were obtained.

Imse sits on the Rental Services Commission, which has been working on the ordinance since this spring. The commission met Sept. 7 and Holland, who had just received an email with photos of the postcard, brought it up as the meeting ended. (On an audio recording posted to the city of Portland’s website, the conversation begins at the two-hour, 14-minute mark.)

“I would just ask that as members of the commission we take on the responsibility to inform the public of the truth and of the intent of these policies so that we don’t end up creating fearmongering tactics,” Holland said.

“That postcard was reviewed by a lot of folks and it is not fearmongering, it is statement of fact,” Imse replied. “If you go look at it, you’ll find that it’s statement of fact. It’s factual to the T and in fact, was deliberately not a call out to, you know, the whole world’s going to come apart if this happens. Other residents have the right to weigh in and we have the right to communicate with our residents, ‘Look, you might want to weigh in on this and you might want to see if this is something that you as a resident feel comfortable with.’”

Imse pointed out that other commission members also engage in advocacy and that she has tolerated “bad behavior” from them. She did not name names but mentioned protests at Multifamily Northwest events and seeing her own face on posters, but still comes to the table and participates. Whether she in fact acted with integrity, Imse said, is for the commission to decide.

“I fully stand behind the postcard, the policy, the decision, and that’s why our logo is on it. We could have easily sent something out that did not have our logo on it,” Imse said. “And it’s because I operate with integrity as much as I can all the time, I would not let something go on without our logo on it.”