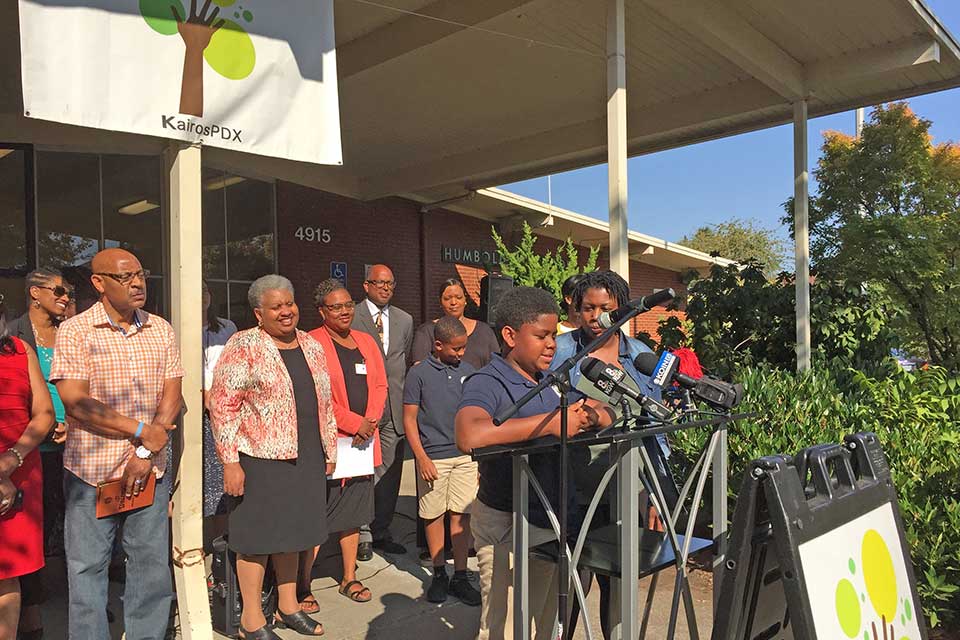 The Portland Public Schools District is in the middle of a significant school scramble, but it looks like the KairosPDX charter school might make it through intact.

Hundreds of supporters of KairosPDX who packed the school board meeting Tuesday night -- wearing “Black Students Matter” T-shirts and chanting “5 More Years!” -- looked on as Superintendent Guadalupe Guerrero read an announcement that he will re-commit his support to the African American-focused charter school which is again facing displacement by the district.

Kairos staff and families have been in an uproar since asking the district for a five-year lease on the old Humboldt Elementary school building, but instead getting a 30-percent rent hike and the promise of just one more year in the space.

Meanwhile, Portland Public Schools has a lot on its plate. The district is this fall trying to finish the job of pulling apart K-8 schools and sorting them back into elementary and middle schools; the district is also re-opening the mothballed Harriet Tubman Middle School; and has tried and failed three times in the past year to find a place for just one program -- the ACCESS Academy, a program for talented and gifted kids which will be split into two separate locations. At the same time PPS is only offering one-year leases to the private work-study high school De La Salle North Catholic and -- so far officially -- KairosPDX.

Two dozen letters of support were issued to Portland Public Schools from local leaders and organizations including Oregon Department of Education Director Colt Gill and the NAACP of Portland.

“When you begin to communicate with various communities but they don’t see anyone who looks like them, and you’re telling them what you’re going to do to help them, they have a lot of hesitation about your sincerity,” he said. “So I would suggest that as you go forward, the things you can control -- you do control.”

After Kairos supporters addressed the school board -- which has no African American members -- Guerrero read the statement committing district officials to return to the bargaining table with Kairos leadership “to accelerate this important work.”

“Here in Portland, like in so many urban school districts across the country, we have failed to effectively serve Black students. This is unacceptable to me,” Guerrero said.

“Families and community members are right to raise attention to this serious and urgent matter.”

Earlier on Tuesday, KairosPDX held a press conference to highlight the impact losing its facility would have on its students and families, calling out the district for damaging its only proven program serving African American kids.

“PPS has a sad history of neglecting Black children in the past, but the past does not have to define the future,” said KairosPDX Executive Director Kali Thorne Ladd.

Speakers at the press conference and at the school board meeting included Herndon and Self Enhancement Inc. founder Tony Hopson Sr., who detailed the long history of grassroots efforts to improve Portland schools for Black children.

“This district has a history of uprooting and displacing Black students,” Hopson said, starting with the Portland busing program that scattered Black students to mostly-white schools across the city during the 1960s and 70s.

“You’ve got to do your own thing -- we have always been creative because of what’s been happening at the district,” Hopson said at the press conference before the board meeting.

“Self Enhancement was created because it wasn’t happening for Black kids in the district, so we really don’t have any reason to believe that the Portland Public Schools will provide an education for Black kids,” Hopson said.

“We will work actively towards resolving the facility question, and are confident we can come to an acceptable agreement,” he said.

“I have charged my Special Advisor on Equity and Social Justice to work with Black students and families, KairosPDX leadership, and our broader community to create a path forward and to accelerate this important work.”