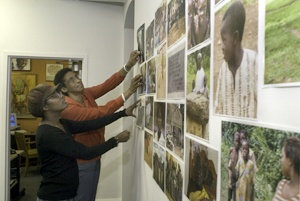 If you have ever celebrated Kwanzaa – or have wondered whether it would be right for you and your family, Interstate Firehouse Cultural Center has an exhibit aimed at you. This month the arts and culture center will honor the only American holiday that celebrates African American origins and values with two exhibits, a Kwanzaa marketplace and an evening celebration.
Adrienne Flagg, the center's creative director, said the events will have plenty to offer for those new to Kwanzaa.
"Our Kwanzaa events are all very open and welcoming and educational," she said. "IFCC is a place where a lot of first-timers come as well as a lot of families with mixed traditions and some people who are very experienced with Kwanzaa traditions.
An art exhibit, curated by fiber artist Adriene Cruz, will include seven altars, created by seven African American artists, including Cruz. Each altar will represent one of the seven principles of Kwanzaa: Umoja, which means unity; Kujichagulia, self-determination; Ujima, collective work and responsibility; Ujamaa, cooperative economics; Nia, purpose; Kuumba, creativity; and Imani, which means faith.
"The principles are very beautiful and universal, and the exhibit is a way to tie them back to a country of origin, one of the countries of origin for African Americans," Flagg said. "I think you need to have a personal experience of Kwanzaa to really appreciate it."
Each altar will be unique, in everything from its materials to its form and meaning, said exhibition curator, Adriene Cruz. Wanda Wright will illustrate the principle of Nia with an acrylic painting, for example, while Raymond Alexander will use a mixed media collage in his Umoja altar, and Mo Jones has created a three-dimensional sculpture as her Kujichagulia altar.
"It's a gathering of artists from the community," Cruz said. "They each have a principle of Kwanzaa that they are approaching from many different levels. So the focus here, rather than being just a general Kwanzaa celebration, is some real mindfulness about what that particular principle means to each artist and on sharing that vision with the community."
A photo exhibit on display in the entrance gallery will feature photographs from Ghana, taken by Oregon Sen. Avel Gordly, Pastor W.G. Hardy Jr., for the African American Chamber of Commerce, and Dalton Miller Jones, Ph.D., chair of the Black Studies department at Portland State University. The trip was organized through PSU's Black Studies department as a cultural and educational exchange, but also to explore forming a trade partnership between the state of Oregon and the African country, Sen. Gordly said.
During the trip, the group — which included 12 students from PSU's Black Studies program — visited three former "slave castles," prisons where people were shackled before being shipped to the Americas as slaves.
"Two of the Kwanzaa principles in particular come to mind when I look at the photos of the slave castles," Sen. Gordly said. "The principle of Kujichagulia, which means self-determination: the meaning is to define ourselves, to name ourselves, to create for ourselves and to speak for ourselves. The other is Imani — or faith — which means to believe with all our heart in our parents, our leaders, our teachers and the righteousness of our struggle. It is those two principles which stand out for me."
Sen. Gordly said the experience of visiting the slave castles and understanding what the ancestors of African Americans had endured, made everyday life more precious and valueable.
"The practice of the seven principles is a way to honor our ancestors," she said. Alongside the art exhibits, the center will host a Kwanzaa marketplace featuring work by local African American artists. Visitors will be able to buy artwork such as handmade cards, notebooks, jewelry, candles, pillowcases, handbags, Kinaras and libation cups.
First celebrated in 1967, Kwanzaa is one of the newest holiday traditions. Yet, all of our national holiday traditions started somewhere. Thanksgiving was not proclaimed a national holiday until 1789. The Times Square ball first dropped in 1907. Independence Day could just as easily have been celebrated on July 2, the day Congress voted for Independence. And Christmas was first celebrated as a feast day in the fourth century. 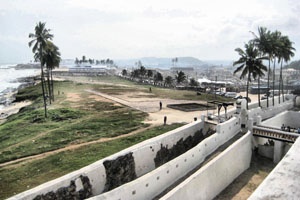 Flagg said Kwanzaa's strong appeal across cultures should ensure its survival.
"All of these holidays were created at some point," she said. "The holidays that survive are the ones with a lot of authenticity and that are very human.
"I have a lot of hopes for Kwanzaa. I think it could be a very long lasting holiday and I hope it just continues to grow."
The holiday was reated by African American author and Black studies professor Ron Karenga. Karenga says, "Kwanzaa was not created to give people an alternative to their own religion or religious holiday. And it is not an alternative to people's religion or faith but a common ground of African culture."
Interstate Firehouse Cultural Center Kwanzaa Celebration: The opening reception is set from 5:30 to 7:30 on Nov. 29. It is free. The Kujichagulia celebration will be held at 5 p.m. on Dec. 27. The marketplace will be open weekends until Dec. 27. The exhibit will run from Nov. 29 to Jan.1. Hours are 11 a.m. to 6 p.m. Tuesday to Friday, and 11 a.m. to 4 p.m. on weekends.