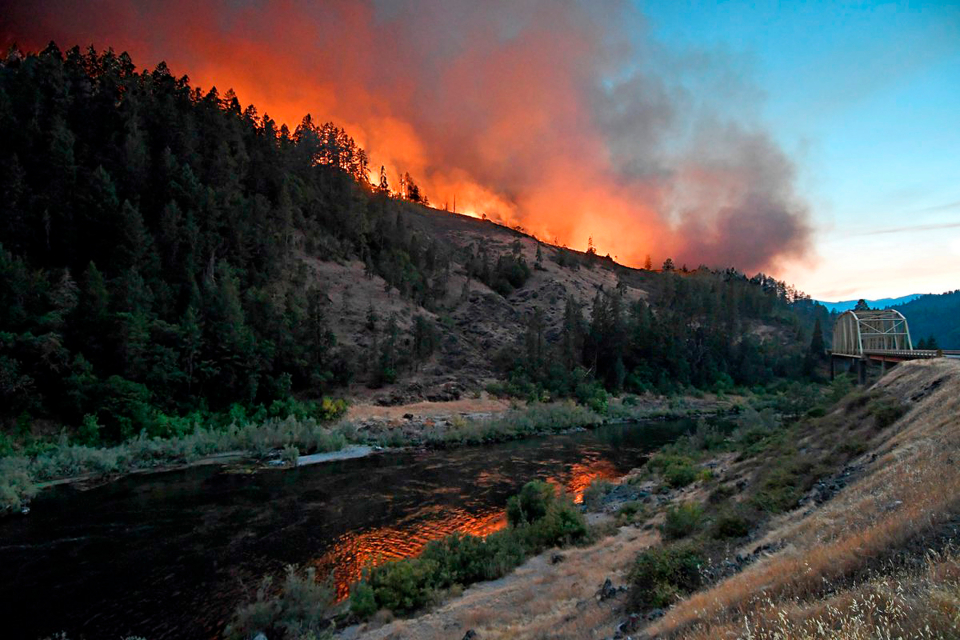 PORTLAND, Ore. (AP) — No one was home at a house deep in the woods of Josephine County, Oregon. The people who live here had evacuated days ago along with hundreds of their neighbors. As flames from the Taylor Creek Fire got closer and closer, the firefighters showed up.

They came to prepare for the worst so that if the wind picked up, they'd be ready to dash down the driveway and save this house, even if the forest burned around it.

The firefighters protecting this house were structure protection specialists from 100 miles away, called in by the Oregon State Fire Marshal.

The firefighters who normally cover this neighborhood work at private companies. That means the people who know these steep hollows and their microclimates best don't have a formalized role in this emergency operation.

"When it comes to recognition within the state level fire service, we don't exist," said Phil Turnbull, the local chief of Rural/Metro, a national company filling public safety gaps across the West.

In Josephine County, Rural/Metro is the largest of two for-profit fire departments serving a geographic area more than twice the size of Portland. When wildland fire threatens homes covered by private crews, they're out there risking their lives right alongside public agencies and the contractors they bring in.

But without recognition through state law, Turnbull said this cooperation happens informally, almost "on the sly."

"Nobody is arguing that we don't have a responsibility or a contractual obligation to our customers. But here we have a fire threatening hundreds of homes, and three out of every 10 homes up there have not been paying for fire protection, at least to us," Turnbull said.

Rural/Metro is subscription based. The average member pays a few hundred dollars a year. And no, the firefighters don't let houses burn down if the owners don't subscribe. Turnbull said first responders don't pay attention to the funding mechanisms when they're dispatched by 911.

"(The person) will, however, receive a bill," he said.

For non-members, that bill could easily exceed $10,000. This includes people who get help because of a car accident or medical emergency.

Turnbull described how he and some friends tried to start a public fire department in the early 1970s.

"We discovered very quickly that there was no real community support for that whatsoever," he said.

Raising local property taxes was a nonstarter. But they still wanted to professionalize firefighting. At the time, the only option for structure protection was a small, mom-and-pop operation doing what it could with outdated equipment.

"I remember a newspaper editorial saying, if trapped in a burning building in the county, say your prayers," he said.

Eventually, Turnbull and that first crew figured out how to convince people to pay for something new: by making home insurance rates drop if they supported a professional force. Just like taxes, the rates depend on property value.

It worked. He said they had a profitable company after a few years, and it was eventually acquired by a national chain. Now they maintain the same safety standards as public agencies.

But those standards are voluntary, Turnbull said. Therein lies one of the rubs, according to a guy who's spent his entire adult life firefighting in this community.

So does it work?

Faced with that question, he paused. He praised his crews and his company. They put out fires admirably, he said.

But in the long run?

"We're allowing it to work well enough," he said. "And we're trapped because you can't take a step backwards."

"I have received complaints from citizens who chose the company they felt was best for their needs and yet they get a bill from the alternate one who got dispatched by 911 and they didn't feel that was fair," Morgan said.

Officials can't force a public department on voters, who have resoundingly shot down the idea more than once over the years.

"It's not that we don't care about each other, or that we aren't grateful for the help," Morgan said. "It's a community that does not believe in big government. They don't want more involvement of government in their lives."

Taking care of things yourself can get expensive. Peter Sedlow pays every month for a fire subscription with Rural/Metro.

Sedlow pays state taxes for wildland firefighters, but he still doesn't feel like his home could actually be defended, because it's surrounded by a thicket of pine trees.

"We'd love to get rid of those trees, and that's going to take more money than we've got," he said.

Sedlow and his wife recently evacuated ahead of the Taylor Creek Fire. While they were at a shelter, their neighbor Jason Rambo stayed home, ignoring the evacuation order.

Recently he could be found manning a giant sprinkler, soaking the pasture around his house and farm. Why did he stay?

"Just feeling younger and able-bodied, to be able to make conscious decisions and calculated risks to remain and be safe," he said over the gush irrigation water.

He also said he didn't want to divert any firefighting resources from his neighbors, just in case they need the help more than he does.