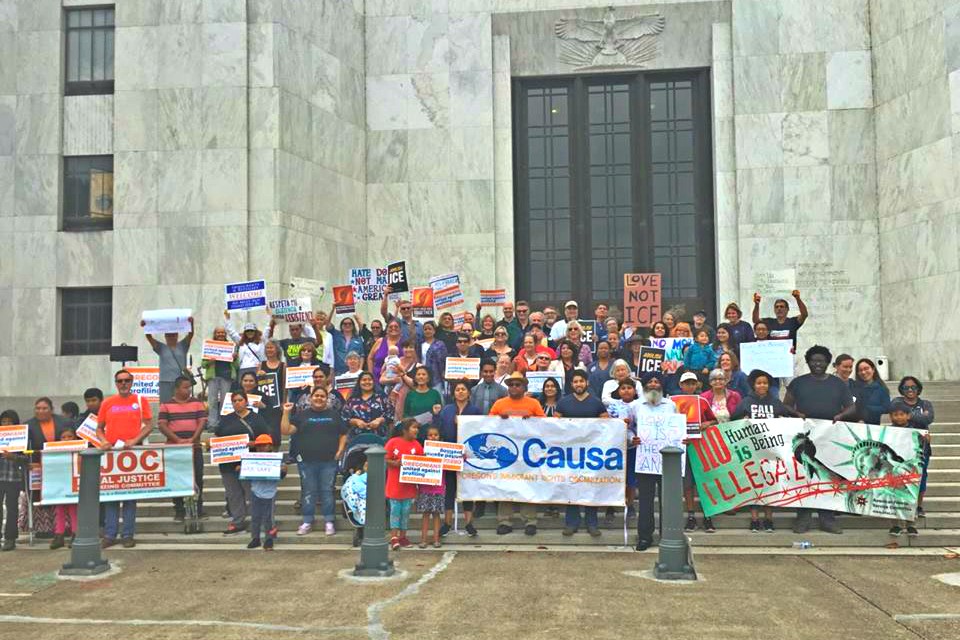 As mid-term elections approach, a coalition of over 200 businesses, organizations, law enforcement and labor leaders have banded together to stop a measure that could overturn a 31-year old Oregon law which has kept undocumented immigrants safe from profiling.

Called “Oregonians United Against Profiling,” the campaign launched last month to protect the state’s sanctuary status from being thrown out if Measure 105 is passed in November.

“The optimism is great, but we need to be cautious with that, because no election result is guaranteed,” Andrea Williams, executive director of Causa Oregon, told The Skanner. Her organization, which works to protect Latino immigrants’ rights, is behind the formation of the new campaign.

“We have to remain very involved because you never want to underestimate the power of your opponents,” she continued.

Those opponents include the Repeal Oregon Sanctuary Law Committee which, according to Ballotpedia, has received a total of $336,582 in contributions. Its top donor is the Federation for American Immigration Reform (FAIR), which pitched in $177,800.

FAIR, along with measure supporter Oregonians for Immigration Reform (OFIR), have both been identified as “extremist hate groups” by the Southern Poverty Law Center.

If they’re successful, Williams fears that Oregon could become a “show me your papers” state, where an individual can be stopped, detained or interrogated just because someone else thinks they might be an undocumented immigrant.

The Purpose of Oregon's "Sanctuary" Law

Oregon’s “sanctuary” law was originally passed in 1987 with the near unanimous support of state republicans and democrats. The sanctuary status delineates between the roles of local and federal law enforcement related to immigration. Moreover, it gives clear guidance to local police on how to handle complex immigration policy.

Simply put, Oregon police and personnel – as well as state funds, equipment and facilities – cannot be used for activities that are the responsibility of federal immigration agents.

The law was initially approved to cease unfair racial profiling of those presumed to be undocumented individuals residing in Oregon, a practice which put strain on local resources.

"Local police are already stretched too thin, 911 calls in rural communities are going unanswered, and budgets are tight. We shouldn’t divert Oregon taxpayer money to do the job of federal immigration enforcement,” stated mayor of Silverton Kyle Palmer on the campaign’s website.

Advocates maintain that the state’s “sanctuary status” does not mean, however, that Oregon law enforcement will turn a blind eye to crimes committed by individuals, including undocumented immigrants.

Instead, the sanctuary law mandates that police cannot arrest someone solely based on suspicions about their immigration status.

That distinction is an important one, says Williams. “Our opponents will continue to drive confusion into the minds of voters. But if you read the actual law that was passed… when somebody has actually committed a crime, then local police and federal immigration can work together.”

“That’s the clarity we’re trying to provide from our side, that this law is quite practical,” continued Williams.

“It both holds accountable people who harm our communities and it protects peoples’ basic civil rights. The more we can remind voters of that distinction, they more they can understand that this is a really important law.”

Preserving Oregon’s sanctuary status – and thereby protecting people from profiling – is a matter of human dignity, says State Senator James Manning (District 7). “We have people living in our great state that are afraid to do anything, from going grocery shopping to reporting a crime, because if they do so they may never see their family again.”

“As a matter of fact, immigrants are the ones who are least likely to commit a crime,” continued Manning. “I think Measure 105 is trying to roll America back to the Dark Ages and it’s the wrong way to go. I oppose it and I’ll fight hard to see that it’s stopped.”

“Oregonians United Against Profiling” took their fighting to the streets on July 28 in an official statewide campaign launch. Close to 500 volunteers turned out at events held in 10 cities across Oregon to show their opposition to Measure 105. The coalition collected over 150 small business endorsements in places such as Medford, Astoria, Bend and Redmond.

“We’re going to have to work really hard to defeat this measure, but there’s been a lot of excitement from the community,” said Williams. She added that the weeks-long occupation of the ICE facility in Portland – over which Mayor Ted Wheeler is facing scrutiny for not interfering – is a sign that people are not afraid to “get messy” over what they believe is unjust.

Said Williams, “In Oregon, I think it’s important that we continue to lift up our voices against family separations and detention camps for children, and also that we focus on defeating ballot Measure 105.”