Word of the year – or of the decade – for the construction industry is disparity.  In fact, Oregon Department of Transportation has just released its seven-year study of contracting disparities.
Their results – African American and Asian American businesses are largely left out of state road construction projects.
The study counted how many ODOT contracts go to small businesses owned at least 51 percent by women or minorities. Among the findings – participation by African American subcontractors is abysmally low; they have only been awarded three contracts during the study period of 2000 to 2007. 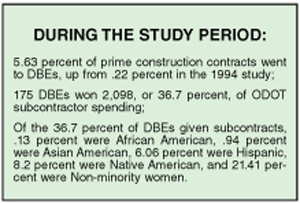 "ODOT is robbing our community," says James Posey, Oregon president of the National Association of Minority Contractors, about a problem that he says has been blatant for 25 years.
"If you were going to apply for a job and you got turned down … repeatedly … would you go back?"
One of the reasons for the low inclusion rate of African American subcontractors is their low level of availability to ODOT. In order to apply for ODOT projects, a company has to be certified in Heavy Highway Construction and be on a list of contractors available for ODOT project. After feeling discouraged, Posey said many small and minority companies – known technically as Disadvantaged Business Enterprises — drop off the availability list.
That is exactly what they shouldn't do, says Michael Cobb, director of the Office of Civil Rights for ODOT.
"If you're not on that list, you're not even eligible," Cobb said.
But Faye Burch, a construction industry consultant with F.M. Burch & Associates and Oregon vice president of the National Association of Minority Entrepreneurs, says the process of bidding on ODOT projects is time consuming and complicated. She says when African American contractors see other African American companies fail to receive contracts, they are discouraged from trying.
Cobb also said the evidence of disparity could lead to improvements. Courts have ruled that agencies must present evidence of a disparity before enacting narrowly tailored race-based contracting goals. Authors of the study say ODOT could reinstate some contracting goals to increase the numbers of Disadvantaged Business Enterprises (DBEs) because of the proven disparities.
Although African- and Asian-American contracts for ODOT are extremely low – or what one might call rare – all other DBEs received about 37 percent of ODOT spending on federally funded projects over the seven-year period. Those federally funded projects did not have DBE goals. But in fiscal year 2007, after ODOT had suspended DBE goals on state projects too, DBE companies received 30 percent fewer contracts than the year before.
And while Posey, who owns Workhorse Construction a heavy highway certified business, says ODOT's contract procurement practices are thinly veiled racism, Cobb says that's not the case with his agency.
"As an African American, I know (racism) is very prevalent on both coasts," said Cobb, who lived and worked on the East Coast for many years. "But I can only speak on my sphere of influence. I know (ODOT Director) Matt Garrett. I know where his head is at and I know where his heart is at."
Cobb is addressing the disparity by promoting programs that aim to help small business. And ODOT is unbundling large construction projects to make small projects available to DBEs. Many previous projects were simply too large for many small businesses to even bid on.
A partnership with Turner Construction also will provide classes and training to DBEs. The skills taught by a large prime contractor – bookkeeping, computers, applying for contracts – may seem simple, Cobb says, but it's sometimes the simplest things that keep a small minority business from winning contracts.
Cobb said he's also set aside money to provide to DBEs the $100 it costs to sign up for Bid Express, an electronic service that allows subcontractors to electronically view bids and securely send proposals to ODOT.
Posey and Burch point to one agency that has been very successful in including DBE contractors –TriMet. Bruce Watts, TriMet's director of diversity and transit equity, says it took work to make sure DBEs were contracted on both the Interstate MAX and Downtown/I-205 light rail projects, but the effort was more than worth it. Now, many of the subcontractors who worked on Interstate have been awarded contracts on the new light rail projects.

TriMet doesn't have hard goals or quotas, but agency project managers set clear expectations when it comes to hiring competent DBEs for subcontracting work. Prime contractors hire the subcontractors, not TriMet, Watts said, but because TriMet makes minority contracting a priority and offers technical assistance to both prime contractors and subcontractors, the agency is able to reduce the friction that could come with new business partnerships.
Like ODOT, TriMet has to deal with the same federal regulations dealing with DBE goals. Its projects and subcontracting opportunities also are similar to ODOT's. That's why Watts says, he hopes the TriMet experience will help ODOT be more inclusive of DBE contractors. Burch says she's less hopeful. A disparity study in 1994 showed similar problems for ODOT.
The state could benefit as well as the contractors. After all, Watts said, the Interstate MAX project finished ahead of schedule and under budget. And DBE inclusion was an integral part of that success.