Dr. Jacobs Is In 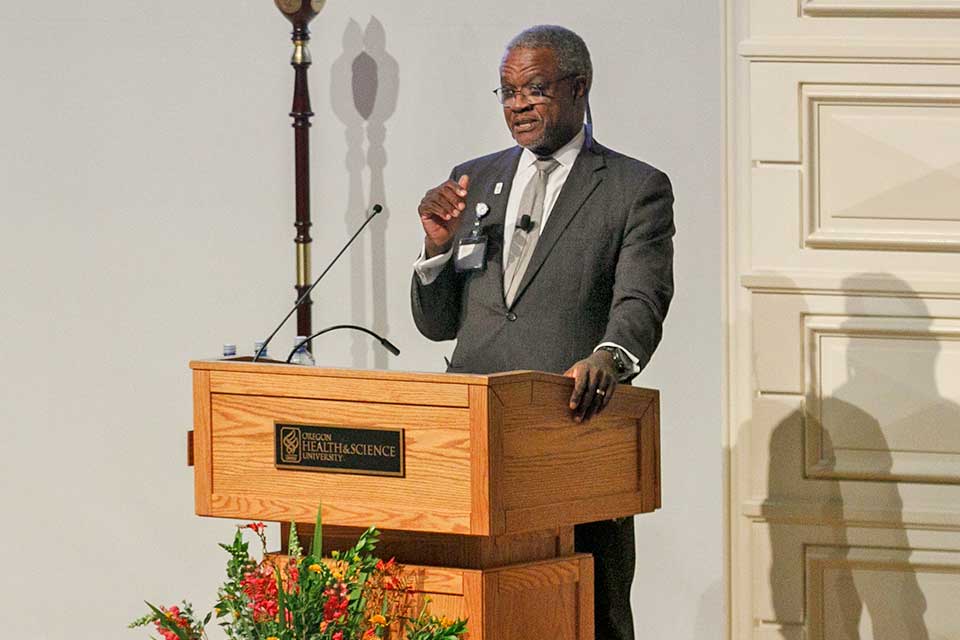 Jacobs, 63, was selected in May as the fifth president of Oregon Health & Sciences University – and its first African American president – and started on the first day of August.

Jacobs replaces Dr. Joe Robertson, who retired last fall. Jacobs comes to OHSU from the University of Texas, where he served as dean of medicine, and has held faculty appointments at University of Pennsylvania, Harvard, Creighton University and Duke. He received his M.D. from Washington University in St. Louis and his master’s in public health from Harvard.

On Aug. 2, Jacobs spoke briefly with The Skanner about his plans for his new role. This interview has been edited for space and clarity.

TSN: Can you talk a little bit about your background?

DJ: I was born in Arkansas, but over the years my career has taken me to a number of areas – Vermont, I went to college in Boston, medical school in St. Louis, additional training in Boston, I moved to Nebraska for a couple of years, lived in North Carolina for 10 years, I lived in Texas for six years and then I came here.

TSN: What attracted you to the Northwest?

DJ: Here’s the way it would work at our house. I would get a letter or an email that would say, "Dear Dr. Jacobs, would you like to look at X?" And then I would show them to my wife Nancy. And most of them, we would just look at and put in the trash. That sounds bad – it’s not because they weren’t great opportunities -- but we would say, “Well, that’s not for us.”

This one came about, and I was about to follow that same process, and my wife Nancy said, "Well, hold on a second." Nancy, my wife, finished at Oregon State University in Corvallis. She spent about four years here. She actually has relatives in Oregon but all of her siblings are in Northern California. So in terms of family pull, that was a big issue in her mind, in my mind, to say, “Well, we will look at this opportunity. It looks great on paper.” I knew about some of the accomplishments, some of the history, but that was a big pull.

Some folks have said to me, “Well it’s the promotion, the opportunity to be president. And of course that’s significant, highly significant. It is a promotion. But on my list of 10 things, most of it was about impact, the opportunity to do something different than my previous job, about fit, opportunity to work together to do wonderful things -- and then to be closer to Nancy’s family. She’s been a trooper and followed me around for two or three decades. I felt like if this worked out it would be a good opportunity to get close to her folks.

TSN: What are some of your plans and expectations for your time at OHSU?

DJ: We’re focusing on the next several months where the objective is to facilitate my onboarding and transition to the presidency, and to do that as quickly and as efficiently as possible. There’s been a lot of work, even before I started today, in terms of documents that have been requested for viewing. I started reviewing the materials four or five weeks ago. That is an instrumental and essential first step to strategic planning. Dr. Robertson emphasized the importance of strategic planning as he was coming on board. I’m also a believer in strategic planning, but the first step is trying to make sure I understand the current reality and that we, as members of this fine institution, understand the current reality.

Some folks describe that as looking in the mirror and making sure you understand exactly what’s looking back. Once we define our current reality then we can get to the revised or continuation of the strategic plan that Dr. Robertson introduced years ago. That means I’m going on listening tours. The whole point is to get out, ask clarifying questions. It is the wisdom of the crowd that is critically important, I think, for the success of the president at OHSU.

We will ask those questions, we will launch a new strategic planning process – and by “new,” I mean a continuation of the plan that was originally authored. I think it was scheduled to finish around 2020. Every good strategic plan is a living, breathing document that can be reviewed on a regular basis. You don’t just write it and put it on a shelf. There’s active engagement that’s required for all strategic planning.

TSN: What are some of the challenges that you anticipate encountering in this job?

DJ: I think the challenges are not necessarily unique to this particular academic health center. The list would include things like information technology and how should that be used, managing population health, disruptive technologies that our trainees might use. It’s absolutely essential to provide the highest quality to everyone that we serve.

We’re not alone in terms of needing to address this issue of the quality of the work environment. People have written about the importance of avoiding burnout, facilitating resiliency among everyone. The National Academy of Medicine has talked about that. What we’ve found out is that, at least in my opinion, this issue of how to improve resiliency is a local process. We have to ask ourselves, “What can we do locally, because one size doesn’t fit all?” I’d say patient care is job one in many respects, but we also have a duty, I think, to educate and train future health care providers, and if we could wave a magic wand and practice medicine perfectly right now, we still would not be satisfied because the outcomes are not what we would want them to be. That means there’s still things for us to learn, and that’s where the innovation piece comes in.

TSN: How can OHSU become a more diverse and inclusive campus?

DJ: I think it’s going to require that process I described earlier. I think we have to define our current reality. There’s been a great amount of work already done to poll the members and ask them their opinions about diversity and inclusion at OHSU. I will say that I’ve been impressed by OHSU’s dedication to diversity and inclusion because it was front and center. All the documents were given to me as I was interviewing for the job. And in fact the job description itself that was written for the president talked about the importance of promoting inclusion and diversity at OHSU.

As I said earlier, I looked at a bunch of other opportunities and other jobs with similar weight, and you wouldn’t necessarily see the loving attention and important attention being put on the importance of diversity and inclusion. The other thing is to look at some of the strategic planning documents. Dr. Robertson has talked during his tenure about the importance of a diverse and inclusive environment. I think there are people, fine people here that are focused on that as well. I think unconscious bias training is part of the strategic plan for OHSU, which is an important first step. I think that my opinion would be that if you look at the universe of academic health centers across the country, all are challenged with that particular issu-- of how to create a diverse and inclusive environment. OHSU is further along in that process [than other academic health centers]. So while we talk about diversity and inclusion, while we recognize that there are clearly opportunities to make it better, I think OHSU should applaud itself for its efforts to date.