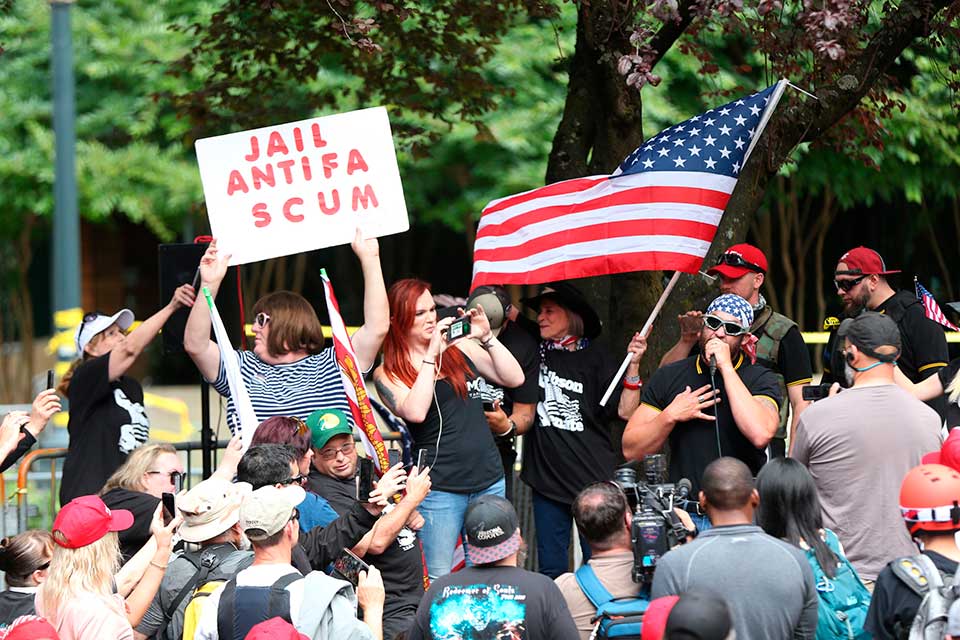 A White supremacist march through downtown Portland on Saturday resulted in four arrests, one journalist injured and countless images of violence beamed on news broadcasts across the nation.

Was just standing next to @Oregonian reporter @edercampuzano, he got hit with something and is bleeding. Medics helping him. Things are getting extremely intense, even for those of us standing back from the center of these groups pic.twitter.com/F4ID7Dj2Zp

At least one thousand counter-protestors in Waterfront Park faced off late Saturday morning against between 100 and 200 supporters of the far-right groups Patriot Prayer, based in Vancouver, Washington, and the Proud Boys, based in New York. (The Proud Boys' local leader, Joey Gibson, was in the final stages of a campaign to represent Washington in the Senate Saturday. He lost.)

Hundreds of images of the march show law enforcement in riot gear with backs to the White supremacist protesters, facing out with weapons pointing at the far bigger left-wing crowd that includes black-clad anarchists and clowns in full costume.

Video shows when @PortlandPolice unloaded munitions, apparently unprovoked, into the anti-racist protest march yesterday while they were protecting #PatriotPrayer and #ProudBoys.
In order of shots fired, shooters were Officers Flippo & Caler #AllOutPDXhttps://t.co/E1raAbOi60 pic.twitter.com/L0C3Jw5HGF

Community groups have sharply criticized the Portland Police Bureau’s response, and protesters stormed Portland City Hall Wednesday morning, scuffling with security guards and others. At least one person was arrested.

At Saturday’s march, police used flash-bang grenades, pepper balls and tear gas against demonstrators; a photograph circulated online of an unconscious protestor allegedly shot in the back of the head with a concussion grenade.

Another post showed video of two reporters being rushed by riot officers.

"The Portland Police Bureau’s response to protest is completely unacceptable in a free society,” said the ACLU of Oregon in a statement Sunday.

“The repeated use of excessive force, and the targeting of demonstrators based on political beliefs are a danger to the First Amendment rights of all people. We call on the Portland Police Bureau, Mayor Wheeler, and Chief Outlaw to immediately end the use of weapons, munitions, and explosives against protesters."

Eder Campuzano, a reporter for The Oregonian, was hit on the head with a glass bottle and bleeding profusely. Campuzano later wrote that he received four staples to the head but was not seriously hurt, and that he did not think he was targeted.

Patriot Prayer has already hosted a series of increasingly-violent public rallies in downtown Portland, and Saturday’s was expected to be the biggest so far.

Organizers at first called for marchers to “open carry” their weapons, and conservative talk show host Alex Jones of InfoWars was expected to fly in from the East Coast (in the end he sent in a replacement host).

On Monday morning, Portland Police Chief Danielle Outlaw said that allegations of injury due to police actions will be scrutinized and the information will be turned over to the Internal Police Review.

“I have directed the Professional Standards Division to begin the intake process regarding these allegations to determine if force was used and if so, was within our policy and training guidelines," she said.

When reporters who were on scene asked Outlaw why crowd control devices were not used against Patriot Prayer protesters who moved into the counter-demonstrator crowd against police orders, she said she could not answer that. Outlaw also said there is video footage of counter-protesters throwing projectiles immediately before crowd control measures were used that will be released. That claim runs counter to many accounts from reporters and activists at the scene, and as of Wednesday morning The Skanner staff had not seen or obtained footage that confirms that narrative.

It seems pretty clear that PPD's strategy of keeping the counter-protest out of the park backfired because of the size of the crowd (good job Portland) that showed up and overflowed into the street. They decided to clear the area and went after the CP unprovoked. #DefendPDX https://t.co/RT13MXsf4m

The Oregon chapter of the Council on American-Islamic Relations and the Portland chapter of the Democratic Socialists of America released a statement Wednesday morning criticizing Outlaw’s response and calling for an outside investigation and full funding of the Oregon Department of Justice’s civil rights division.

“We’re deeply disappointed by Chief Outlaw’s response to these troubling events. The Portland Police Bureau (PPB) has failed to protect Portlanders who have for years experienced the ramifications of violent alt-right behavior gone unchecked in the city,” the statement reads.

“This behavior has included racist groups openly admitting to spreading hate speech and violent threats, carrying weapons into public spaces, causing violence that provokes police attacks upon innocent protesters, and manipulating the police from conducting thorough and proper investigation of riot events they have organized.

On Tuesday, Portland Police Association president Daryl Turner praised Outlaw’s comments, saying police “prevented a potentially catastrophic outcome to a situation that grabbed media attention nationwide.” Turner recently drew criticism for calling Portland a “cesspool” as a defense against reporting that homeless people account for the majority of arrests made in 2017.

Officers have seized multiple items that can be used as weapons and are observing people in helmets and protective padding. pic.twitter.com/KNW0yoyhHb

The IPR last year investigated Portland Police response to a Patriot Prayer rally held in downtown Portland on June 4, 2017. The police review agency reported 27 complaints by members of the public and made a series of policy suggestions.

In a related development, the ACLU of Oregon’s federal class action lawsuit against the City of Portland based on police actions at the June 4 protest is moving forward. The lawsuit argues that hundreds of people were rounded up (“kettled”) by officers without probable cause and forced to show their identification to leave the site.