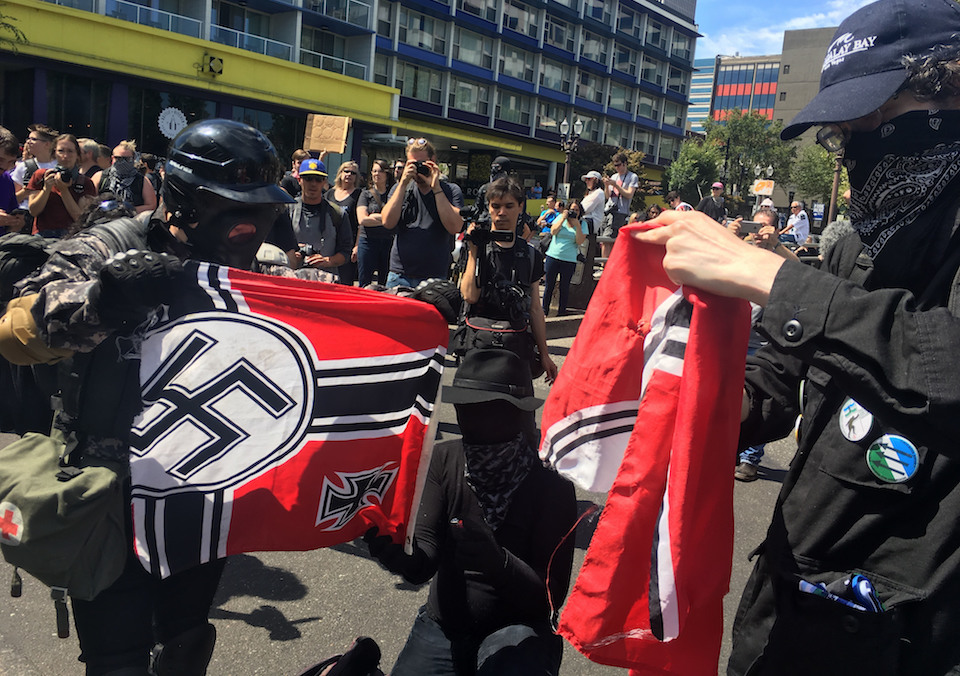 Small scuffles broke out as police deployed "flash bang" devices and other means to disperse hundreds of right-wing and self-described anti-fascist protesters.

A reporter for The Oregonian/OregonLive was bloodied when he was struck by a projectile. Eder Campuzano said later on Twitter he was "okay."

Demonstrators aligned with Patriot Prayer and an affiliated group, the Proud Boys, gathered around mid-day in a riverfront park.

Hundreds of demonstrators faced them from across the street, holding banners and signs with opposition messages such as "Alt right scum not welcome in Portland." Some chanted "Nazis go home."

Officers stood in the middle of the four-lane boulevard, essentially forming a wall to keep the two sides separated.

The counter-protesters were made up of a coalition of labor unions, immigrant rights advocates, democratic socialists and other groups. They included people dressed as clowns and a brass band blaring music.

The Patriot Prayer rally was the third to roil Portland this summer. Two previous events ended in bloody fistfights and riots, and one counter-protester was sent to the hospital with a skull fracture.

This time, Gibson changed the venue from a federal plaza outside U.S. District Court to a waterfront park so some of his Oregon supporters could carry concealed weapons as they demonstrated.

Gibson disputed the group's classification by some as a hate group.

"We're here to promote freedom and God. That's it," Gibson told Portland TV station KGW while walking with demonstrators. "Our country is getting soft." 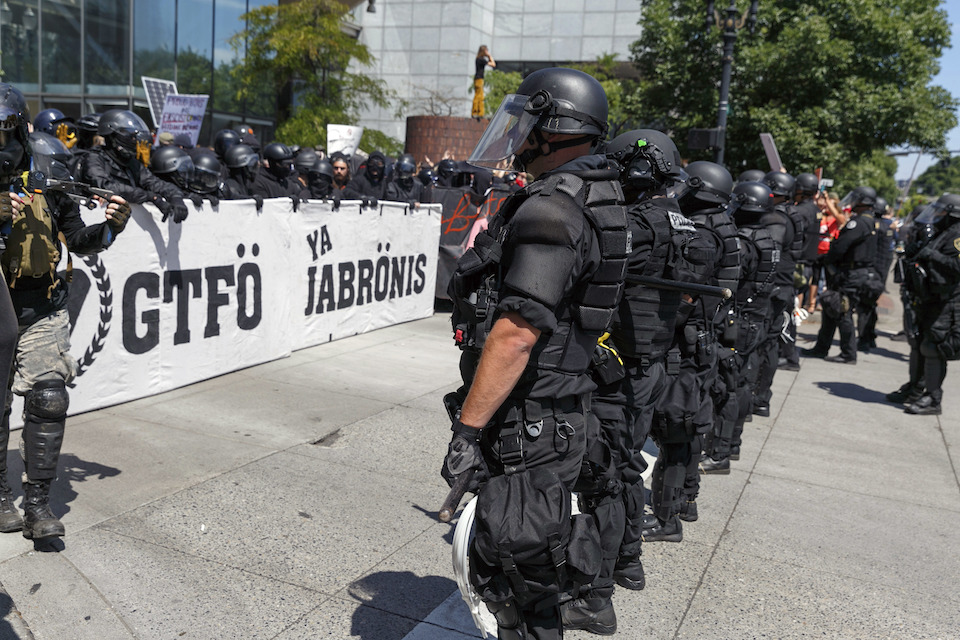 In a statement, police said weapons may be seized if there is a violation of law and added that it is illegal in Portland to carry a loaded firearm in public unless a person has a valid Oregon concealed handgun license.

Among the things police confiscated were long sticks and homemade shields.

Just before 2 p.m., police in riot gear ordered people to leave an area downtown, saying demonstrators had thrown rocks and bottles at officers.

"Get out of the street," police announced via loudspeaker.

Gibson's insistence on bringing his supporters repeatedly to this liberal city has crystallized a debate about the limits of free speech in an era of stark political division.

Patriot Prayer also has held rallies in many other cities around the U.S. West, including Berkeley, California, that have drawn violent reactions.

But the Portland events have taken on outsized significance after a Patriot Prayer sympathizer was charged with fatally stabbing two men who came to the defense of two young black women — one in a hijab — whom the attacker was accused of harassing on a light-rail train in May 2017.

A coalition of community organizations and a group representing more than 50 tribes warned of the potential for even greater violence than previous rallies if participants carry guns.

It called on officials to denounce what it called "the racist and sexist violence of Patriot Prayer and Proud Boys" and protect the city.

Gibson, who is running a long-shot campaign to unseat Democratic U.S. Sen. Maria Cantwell of Washington state, said in a live video on Facebook earlier this week that he won't stop bringing his followers to Portland until they can express their right-wing views without interference.

Self-described anti-fascists — or "antifa" — have been organizing anonymously online to confront Patriot Prayer and the Proud Boys in the streets.

"Patriot Prayer is continuing to commit violence in our city, and their events are becoming more and more violent," said Effie Baum of Pop Mob, a coalition of community groups organizing the counter-demonstration.

"Leaving them a small group to attack in the streets is only going to allow them to perpetuate their violence."

Eric Ward, executive director of civil rights organization Western States Center, told UK-based newspaper The Guardian that while he believed some counterprotesters made some “bad decisions” by bringing weapons, the police charge “punished every counterprotester for the actions of a few.

"This collective punishment, he said “doesn’t align with the treatment of the Proud Boys and Joey Gibson”.

Dueling protests a month ago ended with Portland police declaring a riot and arresting four people.

A similar Patriot Prayer event on June 4 devolved into fistfights and assaults by both sides as police struggled to keep the groups apart.