Black Portlanders Weigh In on Future of PPB 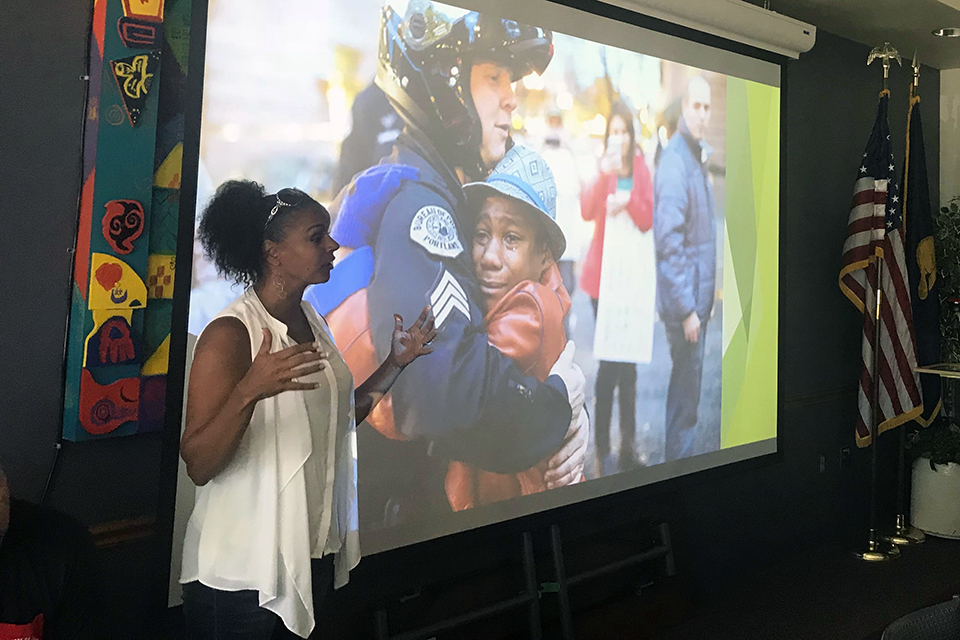 Portlanders of color want to see increased accountability, transparency and a push toward 21st-century policing, according to an informal survey conducted earlier this year by Nike and Herman Greene.

The Greenes created an online survey they publicized through word of mouth and social media this spring and presented earlier this month at a meeting of the Community Peace Collaborative in North Portland. Their methodology was informal – they capped the survey once 100 had been submitted, to make it easier to tally the results – but the intention was to bring the voices of Black Portlanders and other Portlanders of color to the fore. The majority of participants identified as being of color or as part of mixed-race marriages or families.

She began with a slide of a photo taken in Portland that became a famous image in 2014: that of Devonte Hart, then 12 years old, hugging a Portland police officer during a police brutality protest following the death of Mike Brown. (Hart is missing but presumed to have died along with his three siblings and adoptive mothers, all of whom died in April in an apparent murder-suicide, with Jennifer Hart behind the wheel of an SUV that plunged off a California cliff.)

When first published, the photo was touted and shared on social media as a moment of healing and hope between a Black child and a police officer during a painful national moment. Others were skeptical, saying he appears traumatized in the photo; after the family died reporters reviewing the Harts’ social media feeds revealed that Devonte was prodded by his parents to carry a “Free Hugs” sign to political events and concerts and evidently coerced to hug strangers against his will. Subsequent reporting also revealed one conviction, and a trail of abuse and neglect investigations followed Devonte’s adoptive mothers across several states.  Shortly before the family disappeared from their Washington home, neighbors had contacted authorities to say the children had told them they were being starved and abused.

“It wasn’t Devonte’s story,” Greene said. Too often, she said, Black individuals are tokenized – invited to the table, but not truly heard. So she and her husband, co-pastors at Abundant Life Church, decided to gather feedback from the community and present it.

The survey consisted of one question: “If you could have a representative in the police force that would work on your behalf to change the relationship between your community and the police force, what would they be working on?” The responses were open-ended, but the Greenes grouped them into three categories: accountability, transparency and 21st-century policing.

Thirty-four percent of respondents’ answers were grouped under transparency with participants suggesting police educate the community about the issues at hand, meeting with residents more often and finding ways to build bridges so the public has a better understanding of what it is to be a cop.

Finally, 56 percent – more than half – of respondents’ answers were categorized as a search for 21st century policing, or community policing. They included requests to get the police more infolved on the community level, hire more officers who look like the communities they serve and encouraging relationship building – and ending profiling.