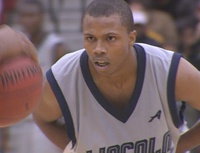 Portland's Hollywood Theatre will be the site of the world premiere theatrical release of Through the Fire, a documentary that follows Trail Blazers point guard Sebastian Telfair through his senior year in high school.


The award-winning film will open in theaters in Portland, New York, Los Angeles and Boston on Feb. 10; additional cities will follow.


Winner of the 2005 Audience Award at the American Film Institute Film Festival, Best Documentary Award at the ninth annual Urbanworld Film Festival and the Spotlight Film at the Tribeca International Film Festival, Through the Fire chronicles Telfair's personal journey as he takes his Coney Island team to the championship,decides whether to attend college or go pro, secures an endorsement deal and gets his family out of the projects.


"When we first started following Sebastian, we weren't planning on making a feature film," said director Jonathan Hock. "However, after spending time with him — seeing the challenges that were thrown his way, the pressure he faced by his family and the community — I realized that we were capturing on camera the classic cinematic hero's struggle and that this wasn't a basketball story at all. It was a family story and the very kind of story that people go to the movies to see."


The cousin of New York KnicksstarStephon Marbury and brother of former Providence College player Jamel Thomas, Telfair has been one of the best-known basketball players on the streets of New York since he was 9 years old. At the start of his senior year at Lincoln High School, while his friend LeBron James was making history with a $90 million sneaker deal and NBA contract straight out of high school, Telfair called a press conference to announce his decision to attend college at the end of the year.


But 18 years of poverty in the public housing projects of Coney Island created a hunger in Telfair. When two young men were gunned down in the hallway right outside his apartment, Sebastian began to feel that he wanted to get his family out as soon as possible, and — if possible — try to make the jump right from high school to the pros.
Under pressure that mounted with every game, Telfair continued to show his genius on the court. He ultimately decided to move toward the NBA and was drafted by the Trail Blazers in the first round, where he is now in his second year with the team.


Hip-hop star and Portland native Pete Miser created the film's original score. As front man for Portland's Five Fingers of Funk from 1992 to 1998, Miser shared the stage with hip-hop greats De La Soul, The Roots and Run-D.M.C. He has since moved to New York and become a solo artist.
For more information, visit www.throughthefire.com.