In Need of Support, Elks Lodge Carries On 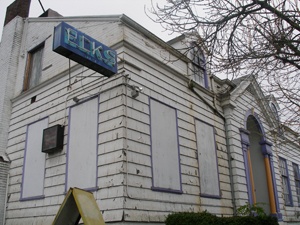 The way Wanda Broadous sees it, if the only remaining African American fraternal organization in the city is lost, yet another piece of Portland's Black heritage will be lost with it.
But unfortunately, the organization's home – which is open to the public – is rundown. Aging and weather-worn, most of its windows boarded-up for nearly two decades, the Billy Webb Elks Lodge building, 6 N. Tillamook off Williams Avenue, is in need of repair. It's also in need of community support, says Broadous, who has been commissioned to increase participation at the old community hall.
"It's a different generation coming up," says Broadous, who owns and operates Broadous Entertainment. "We're looking for a younger crowd in their 30s and 40s to help out."
The lodge, which has been a community gathering spot since its inception in the 1920s as a YWCA is certainly in need of a helping hand. Bar Manager Jennifer Dishman said the building needs a new roof, an electrical upgrade, improvements to make it more accessible to the disabled; and water damage repairs. Not to mention removing the window boards and repairing the neon sign.
After Broadous started hosting fund-raising shows at the lodge in September, enough money was raised to replace dilapidated floors in the kitchen and bar area. She and the Elks would like to get help from the community wherever they can – anything from donated construction materials to manpower to funding.
"We're getting it together to where people can feel safe," she said.
Broadous has brought in several rhythm and blues and jazz acts, including Michael Cooper and Michael Belcher's The Elite.
"Lots of local talent," Broadous said.
And while membership in the Elks Lodge hovers around 70 members, it could always be better, says Dishman. And community support for events welcome to all – members and nonmembers alike – was once much greater.
"This building used to really be jumping," Dishman said. 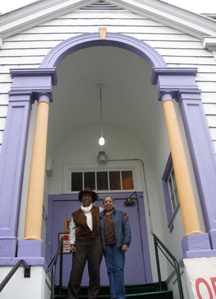 And Dishman and Broadous hope it can be jumping again, and look better than it has in recent memory. Broadous says she's never known a time when the neon sign on the outside of the building worked, and the windows have been boarded up since at least the 1980s. But it is a building with a rich history, they say. The YWCA was active from the 1920s until the 1940s, providing homes to many African American women. The USO utilized the hall during World War II to entertain troops, and after the war, many bands used the hall to entertain the community. Billy Webb – the hall's namesake and Elk's member – performed many times at the hall with his jazz quartet made up of other Elk's members. Dishman said they do not have a picture of Webb and are looking to older members of the community to try and find one.
But that's not the only way they're trying to record the Elk's history. Broadous is planning on holding a storytime on Saturdays – gathering older members of the Elks to tell stories to the community's younger members.
They're also trying to make new memories. Starting at 9:30 p.m. on Saturday, Nov. 24 DJ Amanda will be spinning "all of the R&B songs of the past." There will be at least two more shows in December.
"We're still alive, we're still not well, but we're very much alive," Broadous said.
The club's bar is open to the public Wednesday through Sunday form 1 to 11 p.m. and stays open until 2:30 a.m. on Fridays and Saturdays.