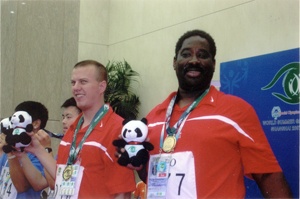 Tony Swan is not famous. He lives in a small apartment in North Portland. He takes public transport when he visits his friends. Yet the modest guy with a voice that any late night dj would envy, is the proud owner of not one, but two Olympic Gold medals.
In October, Tony Swan won a gold medal in the doubles bowling at the Special Olympic World Games in Shanghai, China. He also earned a gold medal for rollerskating at the 1991 Special Olympics games, held in Minneapolis. Next month, Swan will be honored with the Shriver Greatness Award at the Governor's Gold Awards dinner, along with six other Special Olympics Oregon athletes who competed in the Shanghai games and one unified partner, who are people who assist competitors.
The Gold Awards dinner will be hosted by Gov. Ted Kulongoski Dec. 7 at the Oregon Convention Center. Sponsored by Key Bank, the event honors people, businesses and organizations that "contribute to Oregon's greatness." It also is one of the biggest fundraisers for Special Olympics Oregon.
Swan is legally blind, but although he cannot see details, he can make out the pins at the end of a bowling lane well enough to rack up the strikes. In Portland, he bowls with a group of friends every Wednesday and Saturday at Cascade Lanes off 82nd Ave. In China, he had only two days to practice before the competition began.
"I had to get used to the lanes," Swan told The Skanner. "They were smaller than ours are."
Paul Harvey, Swan's coach, has volunteered for Special Olympics Oregon for 15 years. Since coaches are assigned alphabetically it was purely by chance that he was paired up with Swan and his doubles bowling partner, Bobby Snively.
"I got to meet Tony and we had the opportunity to go on this grand adventure together. We had the time of our lives," Harvey said. "This was my second World Games and the first gold medal. Of course coaches don't win medals, but it is very exciting when the athletes you are working with are successful. Tony was a pleasure to work with."
Traveling to China and seeing Shanghai showed Swan how different life can be in other countries. The city of 700 skyscrapers and more than a billion residents seemed very big, he said.
"They have more people riding bikes than in cars over there," he noted. "The people were cool. Now I have friends all over the world."
Swan's brother Steve and sister-in-law Bea traveled to Shanghai to watch him compete.
"It was awesome for us," Bea Swan said. "We were so proud of him. We were very proud he was picked and he did a fabulous job. Tony has such a positive personality."
More than 7,000 athletes from 150 different countries competed in the World Summer Games and about 85,000 people attended the events, which features sports such as power lifting, swimming, track and field and basketball.
Special Olympics Oregon works with children and adults with intellectual disabilities, offering training and athletic competitions in 15 Olympic-style sports. About 5000 athletes currently take part in Special Olympics Oregon's four state games events and 14 regional competitions.
"I coach year-round," Paul Harvey said. "I go from bowling to basketball to softball and back to bowling again."
At the World Games, Harvey said his role was to make sure the athletes had a good time. He and Snow crossed town to watch the powerlifting competition, for example. During competition, coaches are not allowed to approach the athletes, but they can come to the coach for support.
"My responsibility is to be there and to have a bottle of water in case they are thirsty. I can offer pointers, which usually is just to say, 'slow down a little bit and make sure you breathe.'"
The challenge of competition allows Special Olympics athletes to test their courage, skill and nerve. Confidence levels rise and friendships spring up between competitors and among family members, Harvey said. He encourages anyone interested in volunteering to sign up. And he said, the organization is always seeking new athletes.
"If you know someone with intellectual disabilities who is not doing anything, then the opportunities are here," he said. "It's really rewarding to see someone come out and try something and all of a sudden they make new friends.
"Next thing you know you see them on the bus with a new friend and they are having a great time.
"It's a great group of people. I'd like to think I have more fun than the athletes do. I've got as much out of working with them as they have out of working with me."