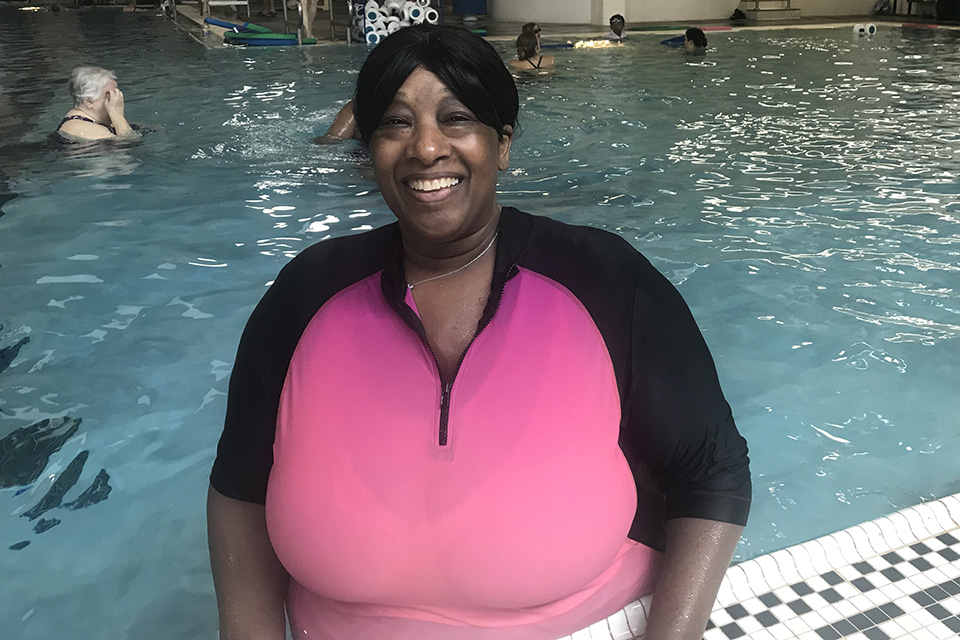 In April 2010, Margarita Taylor weighed 430 pounds, had high blood pressure and cholesterol and was pre-diabetic. She had a five-year-old child she struggled to keep up with and couldn’t join on a field trips, and an older child who went grocery shopping on her behalf.

A doctor warned her, “In just another year or two, you could be dead.”

Taylor found out the pool at Northeast Portland’s Matt Dishman Community Center offered water aerobics, decided to give it a try and ordered a swim suit.

“I’ve been in the pool ever since. I fell in love with it the first day I went to class,” Taylor told The Skanner. She lost weight and within a short period discovered she was no longer pre-diabetic and that her blood pressure and cholesterol had returned to healthy levels.

In 2013, Taylor’s instructor told her she was going to retire and suggested she take over the class. Taylor was reluctant at first, but eventually took the water fitness instructor’s class offered by Portland Parks & Recreation – a three- to four-week class offered twice a year and focused on anatomy, specific exercises and which moves can help or harm people with specific conditions – and started teaching classes at Dishman in May 2014. She received a national certification from the Aquatic Exercise Association shortly thereafter, and participates in additional continuing education, in-services and monthly instructors’ meetings.

The use of water therapy to treat injuries and arthritis dates back to ancient Rome; modern-day water aerobics was popularized in the 1950s by fitness guru Jack La Lane and has grown to include aqua Zumba and aqua yoga. According to the Centers for Disease Control, water-based exercise carries all the benefits of regular aerobic exercises as well as the benefits of resistance training, with a reduced risk of injury.

Taylor credits water aerobics not only in helping improve her health, but with enabling her to participate more actively in her own life. Before she started she was unable to walk fast enough to join her younger child, then five years old, on field trips; in fall of 2010 she joined her daughter on a trip to a pumpkin patch.

“It’s been a godsend for me. It’s given me my life back,” Taylor said. Taylor has worked night shifts as a pharmacy technician at Providence St. Vincent since 1994, and continues to do so while working three mornings a week at Dishman.

“I see firsthand at the hospital how much of [health conditions are] preventable,” Taylor.

In Taylor’s classes, she also sees individuals who are are recovering from injuries, going through cancer treatment or living with chronic conditions such as arthritis or multiple sclerosis. Water aerobics students do not need to know how to swim, though lessons – both for groups and individuals – are available.

Taylor also said there’s a misconception that aqua fitness classes are for senior citizens, but she sees students of all ages, from 30 through their 90s, and classes are open to everyone regardless of disability status, race or gender.

“We come from a place of being non-judgmental, comfortable and safe,” Taylor said. Instructors also receive training in accommodating class members so they’re never asked to do an exercise that’s unsafe for them, and individuals can receive assistance getting into the pool if they have mobility challenges that might pose a barrier. Taylor also noted that individuals who struggle to afford classes may be eligible for assistance through the Silver Sneakers program offered for seniors through some insurers, scholarships offered by Portland Parks & Recreation or discounted activity passes offered through The Miracles Club.

Students and fellow instructors coming out of a Monday-morning S.M.I.L.E. (Slower Movement Intensity Lowered Exercise) class – which ran parallel with a children’s summer swim class in the same pool – said Taylor has a particular knack for connecting with individual students and putting them at ease.

A student who asked to be referred to by her first name, Debbie, for this story said she began attending aqua aerobics classes in May 2016 after being diagnosed with cancer in her eyes.

“I feel like she saved my life,” Debbie told The Skanner. Another student said she was unsure she would ever walk with her right leg again until she started doing water aerobics regularly.

Eileen McGurn, who has taught water aerobics in Portland since 1993 but was also a participant in Taylor’s Monday class, said students return for the sense of community as much as for the exercise.

“One of the wonderful things about Dishman is there’s a lot of ladies who have moved out of the neighborhoods, with gentrification, but come back for the class and still have access to community,” McGurn said.

“Personally, I began class following a debilitating fall that left my short, round self in a world of hurt, immobility and social isolation,” wrote Becky Underhill, who exercises in Taylor’s classes three days a week (and gets “pretty crabby” when Taylor is unable to teach and a substitute has to take over the class), in an email to The Skanner News. “Rita teased me out of my isolation and helped me minimize the effects of my injuries, in short order. I’m not alone in that experience.”

Kim Giroux, the recreation leader for water fitness, said Taylor is “very motivated by love for her students” and actively pursued opportunities to grow her skills.

“This is about more than just exercise. It’s about community. It’s about love and mutual support of one another beyond fitness goals,” Giroux said.