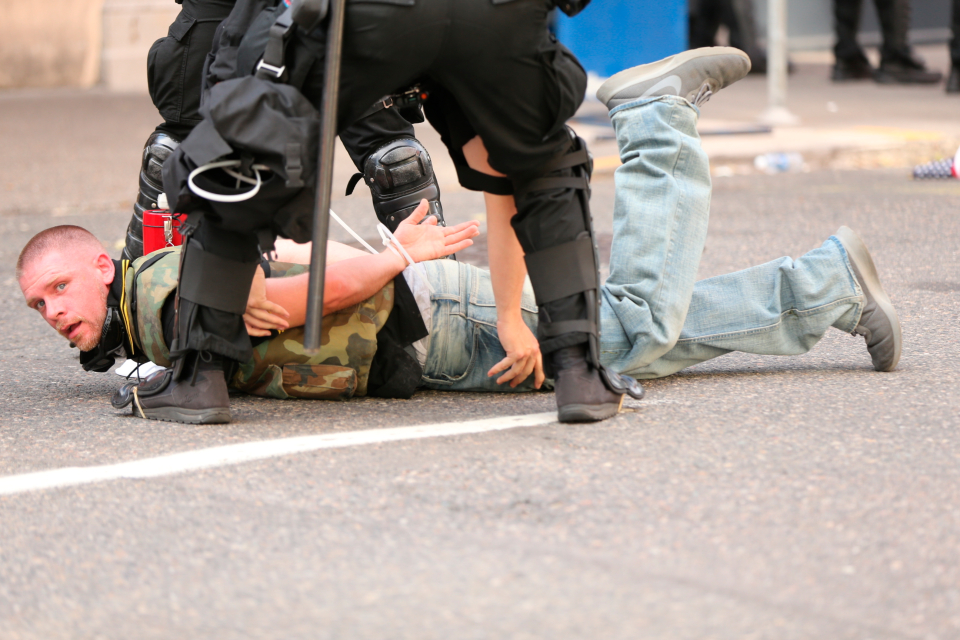 Violent skirmishes erupted in Portland, Oregon, between a right-wing group and anti-fascists who have previously clashed across the Pacific Northwest, leading to injuries and arrests.

Four people were taken to hospitals, including one who suffered serious injuries during what Portland Police declared a riot. One officer was also hurt after being struck by a projectile, police said.

The skirmishes that broke out Saturday afternoon were not related to peaceful rallies held earlier in the day as several thousand took part of a nationwide movement to protest President Donald Trump's immigration policies, KGW-TV reported.

The Patriot Prayer, a Vancouver, Washington-based group, had a permit for a march and a 4 p.m. rally in a downtown Portland park Saturday afternoon. Organizers said the event was to demonstrate for free speech and freedom.

The group has organized similar pro-President Donald Trump rallies in Seattle, Portland and other cities that have drawn demonstrators, counter-protesters and the so-called "antifa" movement aimed at stopping them. Police have struggled to keep the peace at these tense dueling encounters.

On Saturday afternoon, Portland police announced they were revoking the permit for the march after they said officers witnessed instances of assault and other criminal activity, The Oregonian/OregonLive reported. Police used flash-bang grenades and pepper-spray to disperse the crowds.

"We seized numerous weapons early on, and interceded and separated people when necessary. However, once projectiles, such as fireworks, eggs, rocks, bottles and construction equipment were thrown and people were injured, we ordered people to disperse," Portland Deputy Chief Bob Day said in a statement Saturday night.

Police arrested four people but said those arrests stemmed from criminal investigations that began before Saturday's protests and were not related to the day's events.

Police said more arrests could come as investigators follow up on reports of criminal activity Saturday.

Fist fights broke out and several people were arrested during dueling protests involving anti-facists and right-wing groups in downtown Portland on June 3.