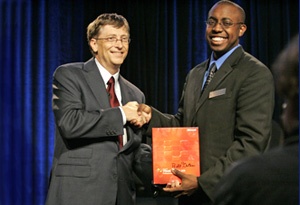 Microsoft Chairman Bill Gates presents a copy of Microsoft Visual Studio 2005 Professional Edition software to National Society of Black Engineers National Chairperson and CEO Darryl Dickerson as part of a software donation Microsoft made to all of the society's educational chapters nationwide.

If you are searching for a well-paid career in an exciting and growing field, you might want to take a look at information technology or engineering. The trouble is … African Americans seem to be looking the other way.
Just about seven out of every 100 information technology and engineering professionals are African American. And the numbers are falling.
That was one of the urgent issues under discussion at the National Society of Black Engineers regional conference held at the Microsoft Conference Center in Redmond from Nov. 16-18.
Keynote speaker at the conference was Microsoft founder and Chairman Bill Gates, who told an audience of about 400 his company needs men and women from a wide range of multicultural backgrounds, with a wide variety of ideas and innovations.
"Diversity is very critical, we want to get as many men and women engineers as possible, we want to get engineers from all over the world and of course we want Black engineers, Hispanic engineers, everyone that we can.
"To be frank, there's some success stories but there's clearly more to be done," Gates said. "We have some great examples of (diversity) of those who have come to work for us but clearly it would be a great benefit to us all if we had many more."
The conference theme was "Igniting the Torch: Engineering in Action" and the event included workshops, speakers, panel discussions, and a career fair.
Gates announced a Microsoft grant program that will donate developer software to all National Society of Black Engineers educational chapters throughout the country. The software will help train engineers and student engineers to develop software programs, design and execute technology projects. The grant will include a free three-year membership to the Microsoft Developer Network Academic Alliance for each chapter, so members will have access to more than 100 Microsoft software products.
"All the NSBE member students will get to build their skills and use these tools, and it's an investment in all of you to become future IT leaders," said Gates.
According to a 2002 study by the National Science Foundation, among the 310 million computer science graduates in the U.S., fewer than 23 million, or 7 percent, were Black.
Cedric T. Coco, General Manger of Engineering Excellence and Blacks at Microsoft president, said Black students need early mentoring, to stoke their interest in the field.
"We want to grab those students who express an interest in technology at high school and college levels and help encourage and support them," Coco said. "It's important that more African Americans get involved in engineering and computer science. That's why the partnership between NSBE and Microsoft is so important."
The largest student-run organization in the country, the National society of Black Engineers has more than 27,000 members, 700 of whom registered for the conference. Busloads of students traveled to Richmond from Los Angles and the San Francisco Bay area.
The society recently named Microsoft as its Most Preferred Employer, citing its career opportunities, work-life balance, job security, internships and opportunities to do interesting work.
Darryl Dickerson, the NSBE's national chairman and CEO, said the grant represented a real commitment to fostering diversity.
"As Mr. Gates said, there is wide disparity in the development of engineers in within this country, particularly among African Americans," Dickerson said. "So this is a bridge, a partnership that will allow us to ensure we're developing more technical talent, especially among African Americans."
In his keynote speech, Gates noted that the overall dropout rate is about 1 out of 3 from ninth grade to senior year, and for African Americans and Hispanics, that number rises to more than 50 percent.
Gates said he plans to encourage multicultural students to study computer science, through working with high schools, the Boys and Girls Clubs, the United Negro College Fund, the Thurgood Marshall College Fund, the Society of Women Engineers, the Society of Hispanic Professional Engineers, the National Center for Women and Information Technology and the National Urban League. The future is full of opportunity for computer scientists and software engineers, he said.
"We used to talk about a computer on every desk and now we talk about putting the computer in the desk," Gates said. "The overall picture of the hardware we have will be far better than what we have today and to take advantage of that we need better software."
Gates talked about how in the future computers will remember how you work and how you interact and software that is able to watch how you manage your calendar, see who you send emails and how you interact with your personal computer.
"We're in a period of very big change," Gates said.