Attorneys Say No Access to Asylum Seekers in Oregon Prison 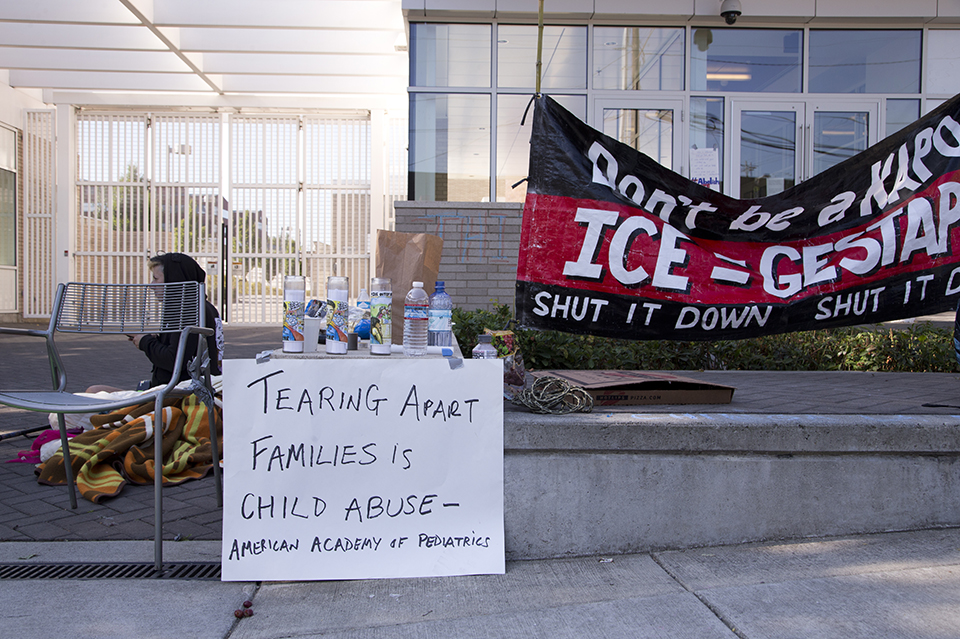 The U.S. Immigration and Customs Enforcement office in Portland has been closed for a second day because of a demonstration against Trump administration immigration policies.

Agency spokeswoman Carissa Cutrell says people who had appointments scheduled for Thursday will be contacted by deportation officers to have their meetings rescheduled. The appointments will not be reported as missed check-ins.

Cutrell declined to say how many people work at the Portland office, or if they have been working from home.

The round-the-clock protest began Sunday, with protesters calling for an end to the Trump administration's "zero tolerance" policy in which all unlawful border crossings are referred for prosecution.

Portland Mayor Ted Wheeler, a Trump critic, says he does not want city police involved in any effort to end the protest.

The U.S. Immigration and Customs Enforcement facility in Portland is closed as protests over President Trump's immigration policies continued.

Protesters told KATU-TV that shutting down ICE is one of their goals, so they considered Wednesday's closure a win.

The protest began Sunday, with demonstrators calling for an end to the Trump administration's "zero tolerance" policy in which all unlawful border crossings are referred for prosecution. The protesters also sought an immediate end to the practice of separating children from their families.

Though the facility was open Tuesday, police were called in to make sure employees could leave safely.

Immigration attorneys in Oregon said Tuesday they haven't been able to meet with more than 120 asylum seekers being held at a federal prison southwest of Portland as protests against the Trump administration's policy of separating families crossing the border illegally flared for a second day.

There are 123 men being held at the prison in Sheridan, at least six of whom have been separated from their children, attorneys from the American Civil Liberties Union and Innovation Law Lab said during a telephone briefing with reporters.

The men are from 16 countries including Mexico, Guatemala, El Salvador, Honduras, Peru and Nicaragua, according to information provided by Oregon Sen. Jeff Merkley's office.

An attorney who was able to enter the facility with a delegation from the Mexican consulate did speak briefly with two Mexican men who said they were separated from their children.

Carissa Cutrell, a spokeswoman for the U.S. Office of Immigration and Customs Enforcement, said generally immigrants apprehended crossing the border illegally are being housed in federal prisons because capacity at immigration detention centers was exhausted by the Trump administration's zero-tolerance policy.

Because the asylum seekers are in a prison, the Bureau of Prisons regulations apply for visits but "ICE is currently ... working to ensure that detainees have appropriate access to their legal representatives."

She could not immediately comment on the specific situation at the Sheridan facility.

President Donald Trump's immigration policies have drawn intense scrutiny following the forced separation of migrant children from their parents. Democrats and some Republicans are urging an end to the practice at the U.S.-Mexico border. Children split from their families at that border are being held in government-run facilities.

Meanwhile, a small group of protesters set up in Portland outside ICE headquarters and held a round-the-clock vigil. They vowed not to leave until the policy of separating children from their families was changed.

The protesters calling themselves Occupy ICE PDX are preventing ICE vehicles from entering or leaving the facility.

The name recalls the Occupy Wall Street movement that began in New York in 2011.