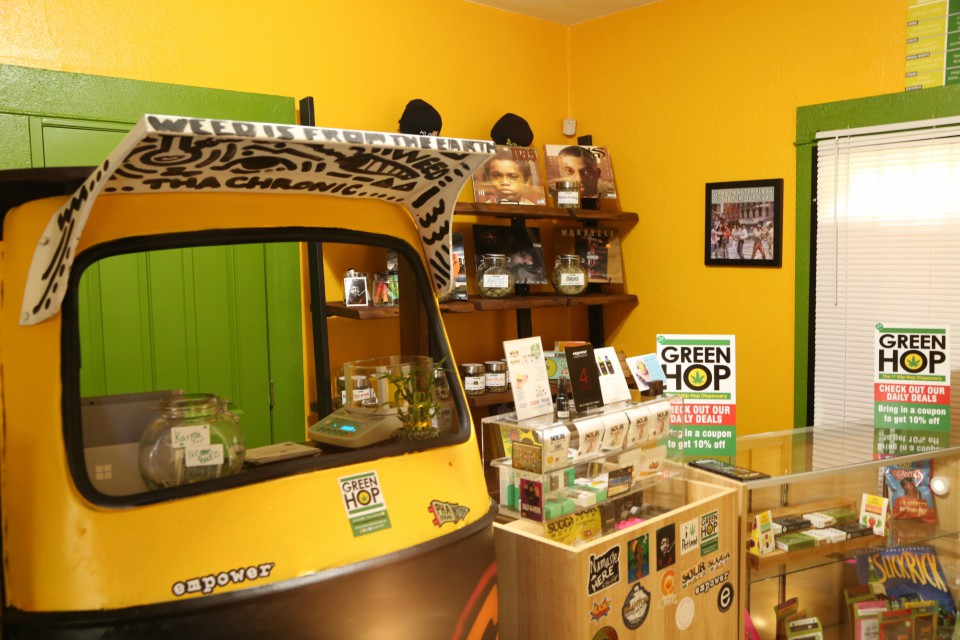 On June 16, Portland, Oregon will be the proud home of what its owners are calling the world’s first hip hop dispensary.

“Hip hop, in a sense, saved my life,” said Green Hop co-owner Karanja Crews, who added that groups like KRS1, Public Enemy and A Tribe Called Quest were in high circulation on MTV in his youth.

“That was a rough time in my life, my parents were struggling with drug addiction and there was a lot of a gangs, drugs and negative activity,” he continued. “(Hip Hop) was my refuge growing up.

"It planted a seed of consciousness and shifted me towards the trajectory I’m on now.”

As a teacher and founder of Teaching With Purpose – an organization that promotes culturally responsive practices in the classroom – Crews wanted to pay homage to the culture of hip hop that inspired a positive turn in his life.

He also believes that hip hop had a major influence on the legalization of marijuana in some states, as the culture has always been unapologetic about using the plant for both recreation and medicine.

Crew’s efforts have paid off in Green Hop, a hip hop-inspired brand that meets at the intersection of music, art and cannabis, while ushering in the industry’s next wave of Black entrepreneurs.

As one of the fastest growing industries in the United States, cannabis is still largely leaving African Americans out of the race – with only one percent of dispensaries owned by a Black person.

Some, however, are adamantly trying to change that statistic. In March 2017, a group of cannabis business owners, policy makers and activists drafted the first-ever cannabis bill that would assist those harmed by racial disparities in drug law by providing them opportunities within the cannabis economy – through business ownership, certification, and even record expungement.

Locally, the city of Portland passed a milestone last year when voters approved a three percent tax on recreational cannabis, a portion of which will help fund programs that support workforce development and minority-owned cannabis businesses.

The tax was championed by Portland City Commissioner Amanda Fritz, who said in a press release that she admired the new dispensary’s “goal of increasing the participation and success of people of color in an otherwise white-dominated field.”

Fritz will join Crews and Green Hop co-owner Nicole Kennedy, alongside US Congressman Earl Blumenauer and Mayor Ted Wheeler, for a ribbon-cutting on June 16 at the dispensary, located in Crews’ childhood neighborhood in Northeast Portland.

The grand opening is also in celebration of rapper and actor Tupac Shakur, who would be 47 years old that day.

“The link between hip hop culture and the normalization of cannabis is a natural partnership,” said Mayor Wheeler in the release.

“Green Hop’s mission to promote community health and wellness, and increase economic opportunities for people of color is something the City of Portland wholeheartedly supports.”

Crews and Kennedy, who works as both a nurse and a teacher, have also launched the Green Hop Academy, an educational program in partnership with Portland Opportunities Industrial Center (POIC) to educate Black youth, ages 21 to 24, about entrepreneurship in the cannabis sector.

“It kind of gives them the 101 on how to enter into the cannabis industry,” said Crews.

Having already run the first cohort of 20 budding entrepreneurs through the 10-week program, Green Hop Academy will also be establishing an apprenticeship, where participants can work on-site at dispensaries, labs or cultivation centers.

“We’re giving employable skills to people who typically wouldn’t get hired at a normal dispensary,” said Kennedy. “It’s a very network-based industry, so this gives them a chance, if they don’t know anybody, to get their foot in the door.”